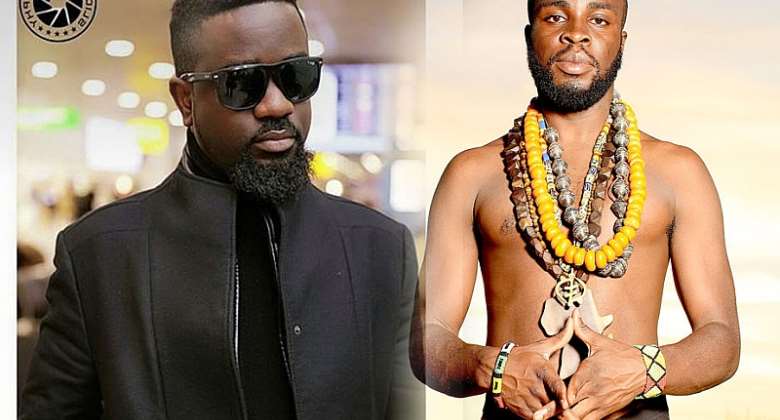 From the office of Sir Article, the Article God...

Dedication - To the former hostess of Multi TV's "For Kids Paradise" and an ardent follower of Manifest, Grace Obrempongmaa Iyiola.

That is a dazzling question I will ask a million times, mainly because a musical revolution is very likely to take place. Manifest, arguably Ghana's finest lyricist, recently released "God MC," which is the biggest song at the moment. No one can dare gainsay the fact that "God MC" is largely a diss track for Sarkodie, Ghana's undisputed greatest rapper ever. The circumstances surrounding Manifest's apparent grudge against Sarkodie are simply offbeat. Interestingly, the Sarkcess Music boss, Sarkodie, is fond of consolidating his enviable position as the king of Ghanaian Hip-hop. He was even explicit about this in his trending song, "Bossy." But the rapper of genius, Manifest, actually threw shots at Sarkodie, proving beyond reasonable doubt that he is indeed the God MC.

Well, let me be strictly objective even as a great fan of Sarkodie, my topmost role model. "God MC" is an intellectually inclined Hip-hop song which has left a chunk of Ghanaian Hip-hop lovers befuddled. I even thought that Manifest's grandfather, Prof. J. H. Nketsia, the eminent musicologist, wrote the lyrics of "God MC." Why? "God MC" is a powerful cocktail of literary devices such as metaphor, simile, paradox, hyperbole, and other elements like figure of speech, wise saying etc. In fact, his lyricism was unparalleled, and you need to be a thinker to appreciate his profound lyrics. Gosh, many fair-minded Sarkodie fans just like me are mesmerised by Manifest's dope track, "God MC."

Moreover, some of his striking lyrics really struck me. "What's a king to a God MC?" Yes, a god wields supremacy over a king. He also said, "You no be star no be star, you're a comet at best." It is a metaphorical expression which calls for deeper understanding. He wittingly uttered that, "Tell the fashion police they can make an arrest. These boys copying the west; looking a mess." You know Sarkodie parades as Baby Kanye or Ghana's Kanye West. He also made this unapologetic remark, "Go to the market, buy yourself manners. Don't use my name in vain. That's just for starters." And he declared that, "Dem dey claim pure gold, but dem be copper."

So I therefore ask, "Is Manifest now destined to overthrow Sarkodie?" Probably yes! "God MC" has incredibly projected Manifest as Sarkodie's strongest challenger and even certified successor in Ghana's rap game. Yet Manifest overthrowing Sarkodie as Ghana's foremost rapper is a Herculean task, because Sarkodie has built a music oriented empire which looks invincible. For Manifest to emerge victorious in his stiff competition with Sarkodie, he has to ensure that his upcoming album "Nowhere Cool" outweighs Sarkodie's previous albums.

He would one day be perceived as Ghana's number one rapper if he definitely maintains his momentum, develops a rare, priceless and consistent brand, and works efficiently at all times. Remember, Manifest is Ghana's best rapper while Sarkodie is Ghana's greatest rapper. Know the difference well!

I won’t be an impediment to free, fair and transparent elect...
6 minutes ago