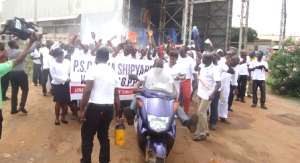 From InusaMusah, Tema
Workers of PSC Tema Shipyard and Dry dock Company Limited (PSCT) have appealed to President John DramaniMahama to instruct the Auditor General to investigate activities of the past administration.

The workers suspect that the past management engaged in illegal dealings, which only investigation can unearth. Workers of the PSCT, have over the years, agitated over poor administration, which had led to immense loss of jobs and huge revenues to the company.

Owing to their constant agitations to prick the government to turn its attention to them, the workers staged a wild demonstration in May, this year, when Franklin FifiFiaviKwetey, Minister for Transport, paid a working visit to the PSCT.

To further press home their demands, the workers held a press conference on June 7 to plead with President John DramaniMahama to implement the recommendations of a report by the Chris Ackumey Committee, which stated in Number 179 that “the proposal by workers of the Shipyard that GPHA should take over the running and management of the Shipyard is worth considering.”

The PSCT workers were heavily relieved and held a vigil of joy, when on Monday, June 13, the Cabinet approved the transfer of the PSC Tema Shipyard and Dry dock Company Limited to the Ghana Ports and Harbours Authority (GPHA).

The elated workers, at a 'thank you' demonstration to President Mahama for heeding to their plea, said the President's order was a dream come true for them and their families who had been starving for years, because they (workers) could hardly get paid to feed them (families).

Painting the atmosphere of the PSCT white and holding a big banner which read: 'PSC Tema Shipyard welcomes GPHA…Long live GPHA; long live Tema Shipyard', the workers marched through the premises of the company amidst singing and dancing.

As though they had won an unprecedented lottery, the workers popped bottles of champagne to signify the end of the former  administration, which  they described as autocratic, corrupt and abysmal.

Commending the workers for their resolve to stay resolute to their cause, which had eventually yielded positive results for them, Christian Dogbe, Acting Chairman for the Senior Staff Association of the Maritime and Dock workers' Union (MDU), told The Chronicle on the sideline of their demonstration that there were legions of rot  in the former administration.

He said the services of a private auditing firm, through the Auditor General, should be sought to thoroughly look into the administration  “and Ghanaians will be shocked of the revelations that will come out.”

The PSCT, Mr. Dogbe alleged, had suffered a lot of financial setbacks because of  corrupt practices and under-hand dealings. “Today, we are holding this demonstration to thank President Mahama for allowing GPHA to take over the Shipyard. From today, we know that money will come into our pockets to also live a better life.

“However, we want to plead with President Mahama to instruct the Auditor General to investigate the immediate past administration of the Shipyard,” Christian Dogbe reiterated. He said the workers were happy for the coming of GPHA because not only did GPHA have the resources, but also it has enormous expertise to turn the Shipyard around.

Citing one example why, to them, GPHA was the most qualified to take over the PSCT, Christian Dogbe said: “GHPA has the financial strength even to the extent that it could borrow more than $100 million on its balance sheet to finance the rehabilitation of the Shipyard and recover same within a reasonable investment period. The GPHA, Mr. Dogbe concluded, was better off to partner the PSCT than any foreign company.