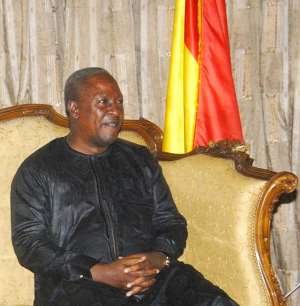 Ghana is suffocating under the weight of corruption. The catalogue of this insidious nemesis to economic growth in the country under President Mahama’s administration will, undoubtedly, fill a telephone directory. Even that, what we know is only a tip of the iceberg courtesy of their own sloppiness. Can you imagine what will be discovered when they are kicked out of office in disgrace on 7th of November? Your guess is as good as mine.

Corruption is a human cancer. Even in the developed countries, it has a comfortable seat in the corridors of power. However, their corruption does not cause somebody to go to bed without food, or die of malaria because they are jobless or lack money to treat a treatable disease like malaria. And most importantly, they do not pick up microphones and insult their people when they go on comfortable trips paid for by the tax payer.

Speaking in London quite recently, President Mahama had the incredible temerity and arrogance to insult Ghanaians who are reeling under his gangster regime of incompetence and corruption that ‘Perception can be heightened because it[corruption] is being discussed long in the media. And When you have a country like Ghana where everybody is free to discuss corruption, if you wake up and you are angry with your husband or wife you take it out on the President, abuse him on the radio, when you have that kind of society, there are all kinds of issues that come up,’ he stated emphatically. This is coming from a president whose administration is riddled with corruption to the extent that the odour can be detected light years away.

If the president has forgotten, this is what he is got to realise. During the last election, he got 50.7% of the votes, which means 49.3% did not vote for him. There are people who did not vote for him due to ideological reasons, and those who just hate his guts. There are some who strongly believe he has a hand in the death of his predecessor. Nevertheless, they still pay their taxes for him to jet off to conferences around the globe with incredible perks. Every night they sleep in darkness with their children crying for milk, they have to suckle them in the darkness while Flagstaff house will be glowing like Las Vegas. It is one thing not to extend a hand of appreciation, but to insult them that they vent their spleen on him when they are experiencing marital problems is poor taste to come from a president who holds a postgraduate diploma in communication. Well, I think I am expecting too much from a man who studied social psychology in a country that murdered 30 million of their own citizens in pursuance of an evil ideology called communism that collapsed like a house of cards in 1989.

It’s only an incompetent leader who is on drugs and at his wits end, like Acheampong exhibited during his twilight years in office before he was ousted in a palace coup, that will drivel like this. Acheampong hit back at Ghanaians for complaining too much and blaming every conceivable problem on him. He went to the extent of saying that even when it doesn’t rain Ghanaians blame him for it, and he had had enough. So, at a function, he decided for a score draw. At his peroration he said, every imaginable problem is the fault of Acheampong, Acheampong! Acheampong! am I God that I should cause the rain to come down? Then after he blew out, came the denouement when he went back to his seat. He confided in one of his lieutenants not knowing that the microphones were still hot, and it captured one of the rare moments of the contempt some of our leaders have for their people. He spoke in Twi so pardon me if I don’t get the translation accurately. Do you realise that when I kiss the bottle I do speak bullshit, he said. In this case Acheampong realised there and then that his verbal incontinence was absolute bonkers. I can, to some degree, understand and forgive Acheampong, because he came to power by the barrel of the gun and ruled as military dictator. But here is a case that President Mahama is democratically elected and his continue stay in office will be sanctioned by the electorates, yet has no qualms about the electorates turning their back on him. I am convinced that he completely believes the nonsense he peddles every now and then. This is a man who said I am a dead goat, therefore, no amount of prodding can take any effect. And said about two years ago that even if he constructs Kumasi roads with gold they will not appreciate. This shows that this man does not care about what the average Ghanaian is going through due to his incompetence. It is very strange that some Ghanaians still have faith in this man who is leading a party that is raping mother Ghana with its pants on. Is it because he has the Voltarians as his ‘World Bank’ as well as his ‘IMF’ as he alluded in his recent tour of the region? My dear Voltarians President Mahama has taken you for fools. I am pleading for just ten percent swing, and you will make him unemployed in November.