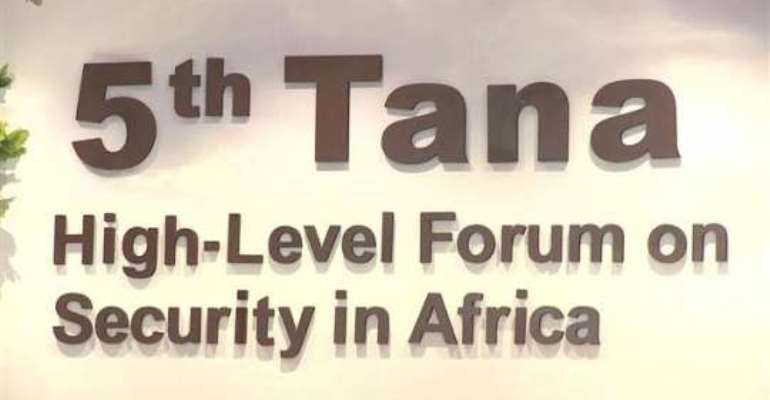 Accra, May 20, GNA - Fact is that about three-quarters of today's global peace support operations are located in Africa. The question then is: If so, then how come that Africa's voice in the global security arena is so limited to a few individuals and organisations? It doesn't add up, does it?

The above fact - possibly figures also - and the proffered questions informed the theme for the 5th Tana Forum, held in Bahir Dar, Ethiopia, from April 16 to 17, 2016, which was set around an agenda of improving Africa's role within the global security formation.

Certainly, this formation wasn't about how a squadron of soldiers must behave in order to combat an enemy or to police an invading threat but more about the role of Africa, and how it can force down an engagement with the global security 'council' to ensure that it had a more vibrant role to play in addressing the litany of wars and trouble spots that seem to get the peep-in by the global peace support operations, but hardly a look-in by African leaders themselves.

In a remark presented on April 16 during the Forum, ostensibly to explain the 'Spirit of Tana', the following words stood out: 'In sum, in a short span of time, the Forum has emerged as a vibrant vehicle for public discussion and reflection on how Africa can be free from recurrent and recalcitrant strife, strife which plainly stands in the way of popular yearning for enduring progress in self-government and emancipation from poverty across Africa'.

That short space of time is the half a decade since the Forum was convened at the behest of the late Prime Minister Meles Zenawi of Ethiopia, and chaired by General (rtd) Olusegun Obasanjo, a former president of Nigeria.'When some six years ago, the late Prime Minister Meles Zenawi invited and convinced me to take on the task of establishing and managing the Tana High-Level Forum on Security in Africa, little did I realise how African security issues would transform in substantive and radically different ways within half a decade', Former President Obasanjo said in his remarks at the event.

Obansanjo's perspective on the state of security in Africa, perhaps, serves as the right fillip for the post Tana discussions which, l am sure, many would engage in. He said: 'It is clear for me that old - or 'traditional'- causes of conflict, insecurity and violence still persist and have gained greater currency today. They can be one or more of the following: inadequate attention to the issue of diversity, leading to marginalization, exclusions, lack of popular participation; inequity, inequality, uneven development and oppression; inadequate attention to education and unemployment particularly of youth; gender inequality; and of course religious bigotry'.

'The presence of any of these, or more than one, in sufficient magnitude for any length of time, when unattended and unaddressed, invariably lead to group dissatisfaction, breed grievances and incubate injustice', he adds. Indeed, Africa in the global security agenda is a very complex one as the interwoven web of issues triggering and fomenting the trouble spots are as diverse as the ideological underpinnings informing the perpetrators.

For instance, inequity and inequality, or oppression in some of the conflict areas today - Burundi, the Central African Republic (CAR), CÃ´te d'Ivoire, Darfur, the Democratic Republic of the Congo, Libya, South Sudan, Somalia and Tunisia - are defined variously because the understanding is based on meaning structures and interpretations based on individual private logic mostly, and not on the collective logic of what must define peace and unity of purpose.

'The bottom line is that we have conflicts in some parts of the continent that seem to be merely promoted by people who just want their way at all cost. Even when the governance system provides an avenue for them to have a chance in government, if that is what they so desire, they would rather take the path of war when they don't get their way. It happens after elections, when losers would strive to cause mayhem to be part of a 'government of national unity', and that is the trouble, and what l have come to describe as 'senseless wars' in Africa', Tabi Ndajisi, a journalist from Nigeria explains in an interview.

So, can it be that the problems of Africa, as far as wars and conflicts are concerned, are all African-made? Well, l would rather posit here a troubling reference made by President Obasanjo on the situation in Burundi, as that seems to perfectly support the notion among many that Africa fuels its own troubles, and by extension, fights senseless wars, as Ndajisi also suggests. 'If one country deserves our eternal vigilance and decisive action to pull from the brinks of an unnecessary and full-scale war, Burundi would no doubt qualify. No one should disbelieve how quickly an already tense situation in that country, one of the poorest in the world according to the UN Human Development Index, has deteriorated - especially following the decision by the incumbent President Pierre Nkuruziza to seek re-election despite the evident constitutional backlashes. To date, the government has not only remained headstrong but also seems determined to defy wise counsel from the international community; including those from the African Union', Obasanjo said.

And he adds: 'Despite the endorsement by the UN Security Council via statement of December 19, 2015, of the decision of the AU to deploy 5,000-strong troops to maintain law and order, and to protect civilians, the government in Bujumbura vehemently opposes its deployment, and even went as far as threatening to treat it as an army of occupation. It is not surprising to me, however, shameful, that during the just-concluded AU Assembly in January 2016, the Union quietly stepped back from its earlier proposal by adopting a position virtually encouraging what is going on in Burundi. The on-going situation in Burundi only makes Africa a laughing stock'.

Africa may certainly be a laughing stock in the international community but the clear manifestation also is that the joke is no longer funny. Not anymore! The impact of conflict on human lives, economic development and the environment is always devastating. While there will always be those who benefit from conflict, these gains are short-term and partial and as most studies have demonstrated that the gains are outweighed by the wider, long-term costs of war. And more worryingly, also, the outcome of such wars and strife is always poverty and suffering, with another big irony - that all who participate in it, even if they survive and are rich, are greatly harmed by it.

Is it possible for all this to change, or is war and conflict an inevitable part of our lives? Tana believes there is a solution, no matter how inevitable wars and conflicts appear, given the way our society is set up. So, the organisers said, 'the 5th Tana Forum sought to harvest diverse perspectives as to 'why' Africa's role in agenda setting on global peace and security is still minuscule, stifled, and farfetched; 'what' the key features of Africa's engagements within the existing global security architecture should be; and finally, 'how' the continent should meaningfully input into the conception, design and implementation of the global security agenda'.

One important conclusion at the forum though was the recognition by participants that Africa had enormous potential and continues to make progress, despite all the myriad of problems it faces. And that is strongly supported generally, with the current narrative of 'Africa rising' suggesting a new developmental direction of the continent.

However, more still needs to be done, and many acknowledged at the forum, with the assertion that addressing the challenges entirely would depend on the 'extent to which African governments prioritise human security in terms of well-being, access to subsidised socio-economic and political opportunities, and the safety and security of citizens over and above regime security'.

In the main, the feeling among participants was that generally, African governments give limited priority to tackling poverty and other forms of socioeconomic inequalities, limiting progress towards ensuring a more peaceful continent, even though, admittedly, progress has been made since 2014, with the number of troubled spots in the continent reduced significantly.

* Bernard Otabil, the Chief Executive of Ghana News Agency, is also a Regional Fellow of the Tana Forum.