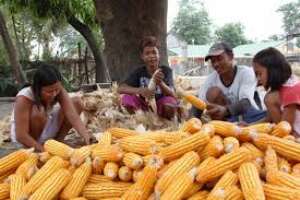 Maize is Ghana’s most important cereal crop produced and consumed by a vast majority of households in all parts of the country. Maize marketing is traditionally a private sector driven which takes place largely in the informal markets. It has been observed that, Ghana’s domestic maize trade is largely dependent on a network of private women traders who dominate the local and regional markets while larger groups of wholesalers engage in spatial arbitrage across regions/districts. These women traders are referred to as ‘Market Queens’ or ‘Ohemma’. Market queens through their networks and associations procure about 93.1% of the total maize produced with the NAFCO procuring paltry less than 5%.

The Ghanaian maize marketing industry is traditionally and currently being operated by private players. In the rural areas, farmers sell to local assemblers who then sell to wholesalers or commission agents. These wholesalers may store large stock of the grains in the warehouses in the urban centers or sell to retailers. The local assemblers and commission agents often act individually while the wholesalers organize themselves into associations under the leadership of the Market Queens.

The market queens influence the quantity of maize to be made available as well as the price at which maize should be sold to them by the farmers. Additionally, because of the industrious nature of these market queens lots of indigenes in these maize farming communities have been able to gain employment, enabling them to earn incomes in order to help support their households.

A study was conducted in two regions in Ghana, namely Greater Accra and Brong Ahafo Region due to productions and consumption of maize in these regions. Brong Ahafo Region is a major maize producing Region in Ghana, producing about 30% of the total maize consumed in the country according to production figures obtained from the Ministry of Food and Agriculture (MOFA) as the year 2015. The study involved in-depth interviews, structured questionnaires and focus group discussions with farmers and market queens.

Research Findings
Factors that determine price of maize in the market

Processes of price determination
According to the survey results, about 71.4% of the traders reported that the price at which they buy the maize is arrived at through negotiation between the farmers and the traders while only 28.6% reported that they buy maize at the predetermined market price. On the other hand, about 63% of farmers reported they sell at a price predetermined by the market queens while the remaining 37% suggested otherwise. About 81% of the traders buy from individual farmers while only 19% buy from an assembled point. Given the fact that almost all the traders belong to one association or the other, the same cannot be said about the farmers, which puts farmers at a disadvantage in terms of negotiation for the price of their products.

The contribution of market queens to economic development

The positive externalities of market queens to the Ghanaian economy have been under studied and neglected by policy makers. The research findings from the study revealed there are laudable contributions that the market queens are making both in the maize procurement sector and the economy as a whole.

Secondly, the activities of the market queens have led to reliable supply of food and food security for the urban economy. The maize staple food sector is one sector characterized by significant post-harvest losses. However, the maize queens have been able to reduce this by ensuring the timely transportation of maize from the farms to the market centres both in the rural and urban areas.

Thirdly, these market queens have been able to fill the gap of financial institutions by providing soft loans or such financial assistance to these farmers in order to aid them commercialize their production. From survey conducted, it was realized that the market queens perform several activities to help farmers in their production process. Furthermore, the activities of the market queens extend to providing storage facilities, regular supply of inputs, transport facilities and regular supply of raw material to processors to farmers.

Fourthly, the activities of the market queens serve as a reliable source of revenue to the government since the taxes and rents paid by the traders serve as a major source of internally generated revenue to the district assembly within which the markets are located. The taxes and rents paid to the assemblies are paid through the market management in the form of market tolls commonly referred to as tickets.

Additionally, the position of a market queen sets the stage for women traders to develop leadership skills, since the women are trained to acquire the necessary entrepreneurial skills in the maize trading sector. About 60 per cent of the traders inherited the business from their parents and superiors after having acquired experiences.

Finally, the activities of market queens have not only transformed the agricultural sector but have also contributed to the achievement of the women empowerment policy goals of the nation. These market queens have been able to create job opportunities for themselves and members of their community. These women are able to earn money to support themselves and also their families. This exposure enables the women to acquire entrepreneurial skills enabling them to expand their businesses.