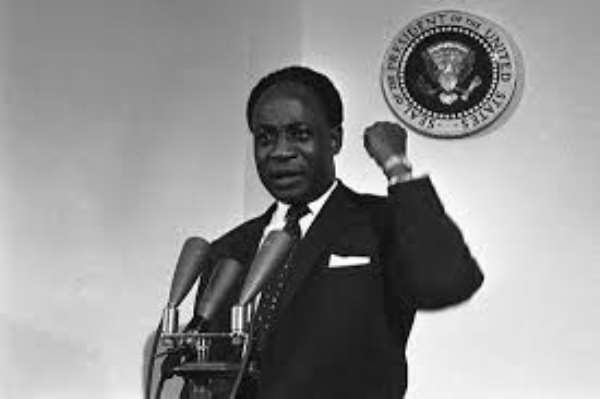 On 24th February 1966, exactly 50 years ago, Osagyefo Dr Kwame Nkrumah was overthrown in a military putsch which was orchestrated by the wings of the Ghana Armed Forces in collaboration with the Ghana Police and unknown external forces. The coup leaders were in the persons of J.W.K. Harley (IGP), A. K. Deku, Lt Col Emmanuel Kwasi Kotoka, Lt Akwasi Amankwa Afrifa, Maj Ocran, among others.

The retired veteran 2nd World War soldier, Lt Gen J.A. Ankrah, was invited by the coup leaders to lead the National Redemption Council (NRC). Parliament was dissolved, the Presidential Council made up of some prominent chiefs such as Nana Anaisie of Sekondi, Nana Kwafo Akoto of Akwamu, Nana Techie- Menson, among others was put into abeyance. The ruling party, the CPP, was disbanded and proscribed.

The coup leaders declared that the myth and invincibility surrounding Kwame Nkrumah had been broken, and that the Council would rule by decrees, caveats and military fiats. Nkrumah had earlier on gone on a peace mission to Hanoi (Ho Chi Minh City) in North Vietnam to mediate in the proxy war between American-backed South Vietnam (Saigon) and the Communist-led North Vietnam.

Nkrumah was a steeped and dyed-in-the -wool Pan-Africanist and Non-Aligned Movement (NAM) member, alongside the likes of Sukarno of Indonesia, Jawaharlal Pandit Nehru of India, Josef Bronz Tito of former Yugoslavia, Gamel Abdul Nasser of Egypt, and Julius Mwalimu Nyerere of Tanzania.

Nkrumah found himself caught in the Cold War maelstrom even though he professed Positive Neutrality. He was caught up with the sad news in Peking (Beijing) en-route to Hanoi. The then Premier of China, Chou en Lai, broke the sad news to Nkrumah as he was Nkrumah’s host. Nkrumah was marooned in China with a large entourage made up mostly of presidential aids, journalists, diplomats, and a large number of security detail led by Ambrose Yankey.

It was saddening to note that 50 years after the overthrow of our illustrious leader, Ghana has floundered on the stormy seas and we have not gained much from largesse from the West. If so, why did those soldiers kowtow so low to sell their country for a pottage or pittance?

We have undergone HIPC, amidst crippling external debt. Ghana does not seem to have made any headway politically, socially, economically, and technologically. We have had a trail of leaders who have the least patriotic zeal in their breasts. Nkrumah laid out long term development plans such as the Seven Year Development Plan, and launched the Workers Brigade with the song,’ Work and Happiness for Beautiful Ghana’. Under Nkrumah, Ghana held a strong position as champion of the Black African Personality. K.B. Boateng yesterday said on this forum that 50 years after the overthrow of Nkrumah, Ghana has retrogressed in all spheres of life, and I could not agree more with the veteran diplomat‘s sentiments.

Nkrumah launched the long term Seven Year Development Plan with advice from renowned economists such as Sir Arthur Lewis, E.N. Omaboe, J.L. Abbey, E. Halm, Arthur Nurske, Neustadt, among others. Nkrumah’s leadership from 1951 to 1966 saw tremendous improvement in youth employment, and a quantum leap in educational infrastructure including construction of the Universities of Cape Coast and Kwame Nkrumah University of Science and Technology. He caused to be built modern secondary schools under the Ghana Education Trust (GET) in all the then 9 regions. He gave science a shot in the arm by providing quality science laboratories which were well equipped and well stocked with current literature. There were no shortages of trained teachers and lecturers. In the early 70s we even exported lecturers to Uganda.

He also set up many Schools of Nursing in all the regional capitals. He established modern and state-of-the-art hospitals such as Komfo Anokye, Effia Nkwanta and Mampong Specialist Hospitals, and improved the Korle Bu Teaching Hospital (started by Sir Gordon Guggisberg in the 1920s). Health care and provision was heavily subsidised and they were easily accessible to all. Nkrumah improved Sports and Culture, Horticulture/ Parks and Gardens, and encouraged the liberal arts. He set up the Ghana Film Industry, Ghana Bureau of Languages, Encyclopaedia Africana, School of African Studies at Legon, among others.

It was the time we had veteran broadcasters like Kojo Halm, Kobena Taylor, Ghartey Tagoe, Kwame Amamoo, Ama Sasrako, Amamoo Kaakrah, Amamoo Panyin, Robert Owusu, John Hammond, Vincent Assiseh, Vida Koranteng Asante, and in print media, we had Gyewu Kyem, Henry Ofori, Cameron Duodu, Kofi Batsa, among others. In Sports, we had veteran sponsors and patrons like Hitharamani who brought up the Ethel Jacks, E.A. Quaye and others in table tennis. In football, we had Ohene Gyan and veteran commentators like Joe Lartey.

Nkrumah invested heavily in human capital by sponsoring many Ghanaians to access education overseas, especially sending many to train in the former Eastern European countries of East Germany, Bulgaria, Romania, Yugoslavia, and in Russia or former USSR. That led to many Ghanaians acquiring advanced degrees in Agriculture, Engineering, Medicine, among others.

50 years after Nkrumah’s overthrow, we have not been able to match our contemporaries such as Singapore, Malaysia, Indonesia, among others. Since his overthrow, we have been wallowing in policy obfuscation, political wrangling, and economic downturn, with high inflation, high unemployment, low standards of living, and downward trend in the spirit of patriotism among our Ghanaian leaders and rank and file.