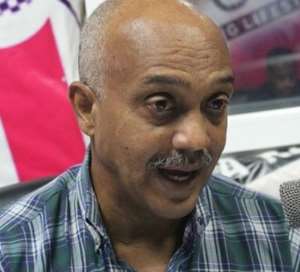 I am so disappointed in where we are as a country, my mind has switched to far out places where the oceans are more tranquil, the breeze more soothing and the food divine and enticing.  Where lobster over a grill is served with a glass of medium sweet white wine and music tinkles in the background without jarring your senses and disturbing the taste buds.  The women are classily clad showing off parts that guarantee a night of near perfect ecstasy, because it is the right ambience to a tasty end.

Where the night is lit all the time, the air conditioning runs twenty-four hours and the water is clean, fresh and flowing all the time; the pool shimmers with cool water and a gentle breeze invites you to ever so elegantly dip yourself into the water, energizing your body for another tomorrow.

Because this is what they have in Singapore.  Why can't I have it in Ghana?  Why should my life remain so miserable and fraught with so many blunders and blanks, that I am constantly thinking back to the good times rather than looking beyond my horizons and dreaming of a more improved Ghana?

But my mood moved down gear, a mild depression engulfing my thoughts and preventing me from adding more vim to my everyday increasing commitments.  I am tired and I am struggling to keep a pace commensurate with my abilities.

The system is beating me down.
I want a one-term leader; that leader who will disregard all the political shenanigans, take on the responsibility and just do what is obviously right to do.  I want to see a leader, determined that once and for all, this country with development opportunity and resource potential can beat the tag of a nation, pregnant with black that will forever depend on outside influence to arrive at Nirvana.  Cut the umbilical cord of servitude and once and for all gestate us past the stigma of 'Africa challenged despite all its resources'.

How much longer are we going to plead stupid, before we gather steam and get to that place where we can sit at the table of nation-changers and watch as people listen to our success story?

I am looking for any politician who can, with hand on heart or up to the sky in supplication to whatever they believe, tell me where lies their proud story of what they have achieved in this Ghana.  Well after five decades and a half, we are still wallowing in the fantasy of minor progress.

We have put up with the yoke of politicians telling us they have answers to what needs to be done to move us forward to an economic revolution, that they and them alone have the key to unlock our poverty.  Not today, but soon.  And see where we are.  Stuck in a country where we cannot even clean our own filth and drink clean water from our pipes.

As I watched and listened to the fifty-year Singapore success story all week, I cried silently, that not a single political decision in this country has moved us past the neo-colonialist dishonor from which we are yet to rise.

This week, the Government is at war with the Ghana Medical Association.  Over what?  A proposal for negotiation in 2016.  Several people have already lost their lives and our President with blood on his hands, just as culpable as the doctors, thinks this is the time to demonstrate budget ignorance and play hardball.  And yet we have no written conditions of service for these doctors in twenty-three years.

Efo Kwasi, a spiritualist from Kwapong in the Asunafo South District in Brong Ahafo was burnt to death by the youth of the town.  He stabbed and killed Kwaku Donkor, a tri-cyclist over negotiations for a fare from a farm.  I am speculating that the amount would not have exceeded GH¢100.  In the process, Kwame Wiafe was stray-bulleted to meet his maker from warning shots by the police.  Kwame Kabore was also critically injured in the melee, all these from a simple commercial disagreement.  Two days of violence.

In Tuobodom in the Techiman area, famous for the song that gave them fame, they epoched the song and fought to death over an alleged story of misplaced 'shitting' in a geographical area.  So far, nine persons dead; Over? Dare I say it?  We are yet to hear the real truth, but not different from what went down in Bimbilla a few times ago from Akomfem and T-shirts.

In Nima, Ayawaso East in the Ga Metropolis, NDC youth threatened to cause mayhem to their Regional Executives for not providing them adequate reward for effort.  Refusing to register themselves for the impending congress in November, they looked for Chair Mr. Ade Coker, who at that time was sitting in a studio next to me on Citifm, making cogent contribution to the Big Issue, which saved him some embarrassment, I suppose.

The cedi is tumbling again, causing much uncertainty in the forex market and pushing speculators to do exactly what the Central Bank says it is solving since 1965 when we established our own currency, because we said we could manage it better.  The Central Bank does not know how the cedi bops up and down like 'tonga'.  No clue, and yet we pay them month after year without fail.  Their boss is still in charge, deeply mucked in their failure.

And then the Ga State muted my whole Homowo this year, uncertainty over who rules the State.  I am half-Ga, unashamedly so, but my peeps are just not on top of the hierarchy.  Trying to explain which stool you belong to and where your ancestry is derived has never been a problem.  I don't think it even bothers the mainstream Ga person, whether their stool rules the State.

It is the traditional stool politicians, whose interests are served because of land money and old scores that must be settled at all costs, and who perpetuate the cyclical stupidity of disrupting the festival for impact.

This year, we all read the news, sighed a big one and went ahead to drink more beer and eat more 'kpokpoi' in defiance of the ignorant history we can't trace to ensure perpetuity.

The perks of being a Ga chief are not clear to me.  Prestige, honor?  The State is seen as the poor contributors in the Regional House of Chiefs and if after all these years the House of Chiefs cannot find a solution to Ga hegemony what can I say or even do?

These are issues that dwell in our society and are nothing to be proud of.  They have been there for as long as I can remember.  When will we move from this cultural and social inertia into a more promising future for the people of Ghana?

I want a nation of meaning; a nation of excellence, a nation where my pride will swell my heart and elevate me to a place of such loft that I can't explain what brought me to that point.

I have been there before, in 2007, at the Ghana Embassy in Washington DC, we celebrated fifty years of independence and to the tune of the National Anthem and Pat Thomas.  I believed we had finally turned the corner and Ghana would look back no more.

We had gold, cocoa, other exportable produce and now oil had come to add to our fortunes ahead of a dawning age of democracy, entrenching with each election.

But now what?  The same political gridlock, the same lying teams of persons, the same lies of pursuing a never reachable wealth and the same rhetoric that they have a solution and it will be a matter of time.

Shame on us, shame on all politicians.  None exempted in my pain this week.  The solutions are obvious, the 'non-plementers' obvious for their inability to do.