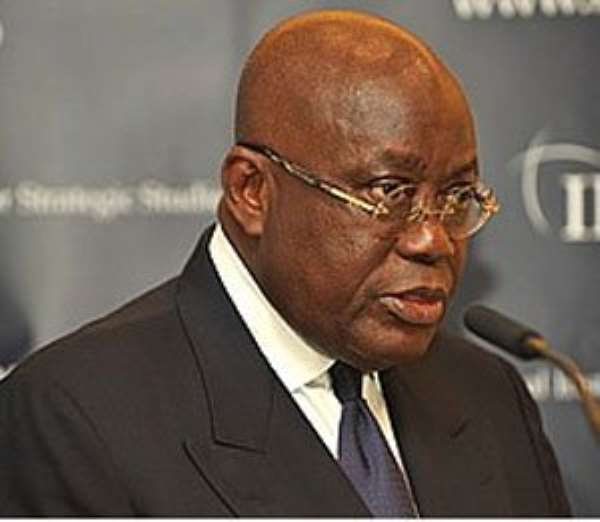 Let me start this article with quotations by some prominent men in the New Patriotic Party. The quotes were made just before the Talensi by-elections on July 7, 2015

“The party that will win Talensi will win 2016 elections” – Nana Akomea, Director of Communications

“If we lose Talensi then it means the ship has wrecked, it would mean forgetting about 2016” – Yaw Osafo-Marfo, NPP strategist and former Presidential Candidate.

“Our Chairman and General Secretary were conspicuously missing during the Talensi campaign – a clear signal that Nana Addo still endorses the division and chaos…..” - BaahAcheamfour of Save NPP now.

Seriously, I could not believe prominent people and leaders of the NPP who knew better, made all those remarks I quoted above when they knew they were going to the battle without their Chairman and General Secretary. How could a country just get up and go to the world cup without a coach and a team captain and still expect to win the cup? It is as impossible as Nana Addo becoming the President of Ghana. Generally in all elections, the party Chairman and General Secretary act as the Coach and Captain on the ground.

Currently, Nana Akufo-Addo is the party’s flag bearer, he is the Chairman, he is the General Secretary and he is the party Organizer. Meanwhile, this is an old man at 72 years. What kind of party is this? And you still hear some of their members shouting “we will win in 2016” Winning elections is not about one old man taking over the responsibilities of the rest of the executives. Winning requires unity and hard work. Currently, I don’t see that in the NPP under Nana Akufo-Addo.

Didn’t the NPP elect Chairman Paul Afoko, a Northerner, so they can win elections in the North? So why did they go to battle in the North and left him behind in the South? Is Dr. MahamuduBawumia and all Northerners, learning anything from the agony of Paul Afoko and did they learn anything from the pain and suffering of AlhajiAliuMahama? I still cannot believe the NPP went into battle without their Chairman and General Secretary and still thought they could win the elections. Any group or organization without a Chairman and General Secretary is not worth dying for. We all know that Chairman Afoko and KwabenaAgyepong could not go to Talensi because of the death of Adam Mahama.

The questions is how many days is it now since Adam Mahama has been buried? So Nana Addo, who the NPP are convincing themselves that he can turn the fortunes of Ghana around, not been able to resolve the issues (if any) between the family of Adam Mahama and his party executives, for how many days now? If that is the case, then they should stop saying that Northerners should vote for NPP so the death of AdamaMahama will not be in vain. Don’t acid your own and take advantage of it. That’s not humane.

I read on myjoyonline that former Attorney General, Mr. AyikoiOtoo is blaming the defeat at Talensi on the absence of Paul Afoko and KwabenaAgyepong. Na who cause the absence of Afoko and Agyepong in Talensi? As soon as the people holistically look into the cause of the defeat at Talensi, the bugs will stop squarely at the feet of Nana Akufo-Addo. But as characteristic of the NPP, the Communications Director, Nana Akomea has immediately come out to refute the claim made by AyikoiOtoo.

Nana Akomea is asking for the scientific basis of AyikoiOtoo’s claims. When has the NPP done any scientific analysis to know why they keep losing elections in Ghana since 2008? Nana Akomea and those who think like him in the NPP are fighting very hard to “unscientifically” blame somebody for the defeat in Talensi. I will not be surprised if by the end of this week, they will find the scientific basis of their defeat, and it will be either the NDC or the Asorka boys.

Ladies and gentlemen, let us immediately dismiss the “scientific basis” thing of Nana Akomea and start working for the reasons NPP lost the elections in Talensi. They did not just lose, but their votes dropped by over 4,500 votes. That is very big. No civilized party would maintain its flag bearer if the party loses over 4,500 votes in one constituency within 3 years. I suggest we start with the claims and analysis by AyikoiOtoo. Let us form a movement called “Nana Addomust go!” so we can holistically know why NPP is diminishing in their numbers. The NPP is not attractive anymore and the “Nana must go” movement will find the reasons for that. This is very important for the benefit of the country.

True, the Talensi by-elections has tested the popularity of the NPP and the NDC. The result is that Nana Addomust go!

True, “the party that will win Talensi will win 2016 elections. The elections are over and the NDC won. This means NanaAddo must go!

NPP’s Chairman and General Secretary were conspicuously missing during the Talensi campaign. This means Nana Akufo-Addo still endorses division and chaos and he must go. He can’t be a President of a peaceful country. He can only lead a confused and divisive party and that is NPP for you.

“The Talensi by-elections will be the best signal to the world that indeed, the elephant is on the move”. False. That did not happen. At the end of the day, NPP lost over 4,500 votes within 3 years and the leader must go! Nana Addo can no longer lead the NPP. It looks like the strength and spirit of the party is too big and strong for him. The best solution for the NPP is to let Nana go! He has become too old.

Fellow countrymen, I am not writing all these to help the National Democratic Congress. I am actually writing to help my beloved country, Ghana. The country needs a strong opposition party to help the ruling government put the country in its rightful place. The NPP under Nana Akufo-Addo, has failed so miserably. For example, President Kuffour left the party into the safe hands of Nana Akufo-Addo in 2008 with 6 out of 10 winnable regions. Now, Nana Addo is struggling to maintain one and a half of the 6 regions.

The NPP is always poor. In 2012, they had to go for a loan of GHC 2.29million from Prudential Bank to support their campaign. That loan has still not been paid. In 2014, Nana Akufo-Addo had to bribe all the delegates with GHC 600,000.00 because the party had no money to conduct the Presidential primaries. In their Parliamentary primaries, bribes were being given from left to right. Some even had curses attached to them. After that, Nana invited those who were able to bribe more to his office for pictures. During the Talensi by-elections, Nana Addo went to battle without his Generals and nobody in the NPP sees nothing wrong with it. Their voting numbers dropped by over 4,500 and one of their seats in Upper Eastis gone.

In 2016, the NPP will have no seat in both the Upper East and West Regions. Law and Order has completely broken down in the NPP. Sammy Awuku and Hopson Adorye could just get up every morning and insult the President of Ghana without any hesitation, Hon. Kennedy Agyapong could go to a radio station and say all the NPP members are fools and President Kuffour is behind the killing of Adam Mahama. The mess in the NPP under Nana Addogoes on and on and on.

Nana Akufo-Addo himself confirmed when some MP-elect visited him in his house on July 8, 2015 that the results in Talensi was “disappointing”I need not tell you this for you to know that something must be done with the NPP before it vanishes from the earth. The PNC is gradually taking over the position of the NPP in Ghanaian politics, and the right thinking leaders and members of the NPP should be bold and say “Enough has become enough. NanaAddo must go” Welcome Agenda 2020. We love you!