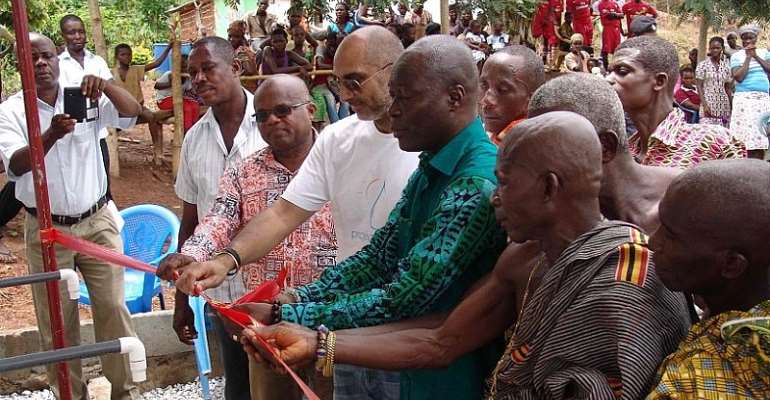 The rural water plant under 'Project Maji' follows the successful installation of the first plant in Atentan in the Assin Fosu North District of the Region.

The' Project MAJI' solution is a simple yet clever solution, using solar power to pump water from deep boreholes with no reliance on outside sources of power making the unit both independent and sustainable.

The pump is powered by its own source of energy, unlike a hand pump. A 'Project Maji' well could pump water from deeper sources, run the water through a filtration system and provide up to 10,000 litres of clean potable water to the people every day.

The Project MAJI team are excited to be in a position to liberate thousands of people from lack of proper drinking water.

Speaking at the opening ceremony, Chief Executive Officer and founder of Project Maji Sunil Lalvani, said: 'We are excited to have undertaken this social responsibility project with the aim of liberating the communities from the scarcity of potable water and its associated diseases.'

He said it was a core goal of 'Project MAJI' not to only provide and install water plants, but also to maintain them.

'Sustainability in all aspects is central to the Project MAJI mission. With great thanks to the sponsorship of Binatone, we now have two functional sites and have proven our concept so that we now look to rapidly scale up and deploy further afield … our goal is to serve one million people with fresh Project MAJI water.'

Managing Director of Binatone-Ghana, Mr Venu Babu said it was the company's 'great pleasure to sponsor these noble projects as part of our corporate social responsibility'.

Mr Nii Lantey Vanderpuye, Deputy Minister of Local Government and Rural development praised the plant, the technology and the achievement and acknowledged the need for such interventions, especially in rural areas, and called for more Public Private Partnership appreciating that the government is unable to achieve that level of penetration on its own.

Dr Stephen Nana Ato Arthur, Member of Parliament for Komenda-Edina-Eguafo-Abrem, the chief of the area as well as other officials who graced the occasion thanked 'Project Maji' and Binatone for the social project.

Binatone was amongst the first few brands to provide product warranties to its customers by recently providing a two- year warranty on all its products as Ghana was chosen as the first African market for the launch as the brand continues to celebrate its 40 years in Africa and 20 years in the country.