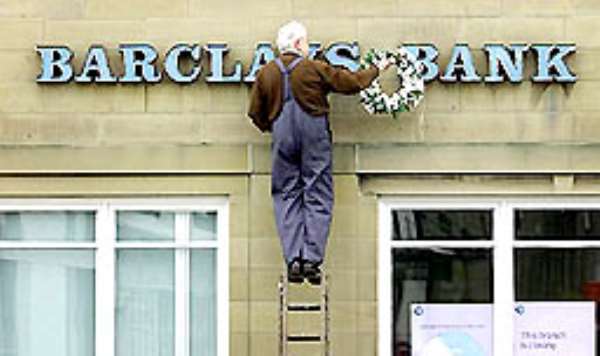 The director of studies of the National Banking College, Mr. Philip Kwasi Buabeng has stated that the banking industry in Ghana remained one of the smallest and the least developed within the West African sub region.

He said for the past five years the total assets of the industry had been hovering around $2billion, which to him was woefully inadequate to stimulate the growth of our national economy.

According to him the situation came about because only 5% of Ghana's 20 million population had bank accounts.

He noted that such a low domestic savings rate would surely not help the rapid growth of our economy and therefore suggested to the commercial banks to embark upon aggressive savings mobilization to correct this imbalance in the banking sector.

Mr. Buabeng was speaking at a workshop on improved economic and financial reportage, which is currently under way in Takoradi.

It is being organized by the Ghana Journalists Association (GJA) with sponsorship from United States Agency for International Development (USAID) and KAB Governance consult (KGC) for selected number of journalists from both western, central and Eastern regions.

Continuing Mr. Buabeng said though for now aggressive savings was the only solution to the problem; the latter could still persist if the banks continued to pay low interest on their customers' savings.

According to him though the Treasury Bill rate had fallen drastically and would probably continue to fall should the government go ahead to use some of her HIPC benefits to offset part of her domestic debts, the banks had still reduced their interest rates on deposits more sharply than their lending rates.

This unfortunate situation, he continued, would surely not encourage Ghanaians to deposit their money with the banks where they would be paid only a small interest.

Mr. Buabeng was therefore not surprised that people have now shifted their focus to the stock exchange where they could probably get more yields on their investment.

The director of studies of the banking college also noted that if our banking industry was already the least developed but still certain impediments were being put in place to discourage domestic savings then one could imagine where the economy would be heading.

He said because of the smallest of our banking industry, banks in the country were unable to take advantage of internal business like the annual national cocoa syndication, which is around $350million.

Whilst criticizing the banks for the low interest they are paying on savings, which could affect domestic savings, Mr. Buabeng was quick to admit that the banks could not be blamed completely without taking their problems into consideration.

This, he continued, meant that all banks are supposed to deposit a total of 44% of their deposits with the central bank.

Buabeng said the banks are also arguing that since the 44% of their total deposits was sitting at the central bank without payment of any interest, there was no way they could also work with the remaining 56% of their deposits and still paid high interests to their customers on their deposits.

The Bank of Ghana, he said, was also demanding the 44% deposit in both the secondary and the primary reserves after taking cognizance of what led to he collapse of Bank for Housing and construction and the co-operative Bank.

He said looking at the crucial role domestic savings could play in the rapid transformation of the economy; a solution ought to be found to the two genuine concerns.

He further told the journalists that in 1998, the union Bank of Switzerland merged with Swiss Bank Corporation to form a new Bank called United Bank of Switzerland with an asset base of $635 billion, which far exceeded the GDP of sub-Saharan Africa minus South Africa.

Buabeng noted that if two banks could have such a huge assets but the banks in the country could not raise $350 million to finance cocoa purchase then something ought to be done immediately to encourage domestic savings to increase the assets base of the Ghanaian banks.

In an answer to a question, Mr. Buabeng said the banks are now chasing and enticing companies to encourage their workers to take loans because it was easy for them to collect back their money.

He said the behavior of the banks could also be attributed to the fact that people are not going in for credits for simple reason that lending rates had not gone down to correspond with the fall of the treasury bill.