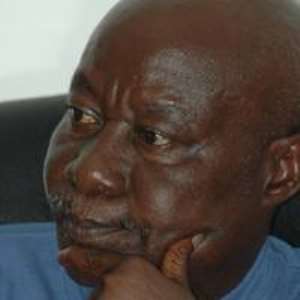 It was with great sadness that we learnt of the tragic passing of the legendary Ghanaian coach, footballer and administrator Jones Cecil Attuquayefio at the Korle-Bu Teaching Hospital in Accra this morning.

Attuquayefio's contribution to football in our country touched the lives of many people not only in Ghana but also in many countries in Africa.

He was an outstanding coach, player and administrator and will be remembered for his various accomplishments and the contributions he made to the game in Ghana.

Attuquayefio was a member of the Black Stars team that won the 1965 Africa Cup of Nations in Tunisia and captained Accra Great Olympics to win the Ghana Premier League title five years later.

While serving as the vice-president of the Ghana Football Association and deputy general secretary in the 1980s and 1990s, he helped to set up the current strong foundations of our federation.

As a coach, he led clubs in Ghana like Accra Great Olympics, Okwahu United, AshantiGold, Liberty Professionals and Stade Abidjan of Ivory Coast as well as the Benin national team.

He served our national teams with distinction having coached the Black Starlets to the Fifa U-17 World Cup bronze medal in 1999 in New Zealand and was also the assistant coach the Black Meteors team that won Africa's first Olympic football medal in Barcelona 1992 with bronze. He also made great strides with the senior national team the Black Stars.

Above all, we will never forget the huge successes he masterminded with Accra Hearts of Oak, leading them to the CAF Champions League, CAF Confederation Cup and CAF Super Cup trophies as well as several Ghana Premier League titles.

The GFA is immensely hurt by the loss of such a talented footballer, coach and administrator who shaped the lives and careers of many Ghanaian footballers.

He served the game with great distinction and success and was no doubt an inspiration to our country's current crop of exciting players.

Whether as a player, administrator or coach, Jones Attuquayefio was an inspirational leader, whose contribution to Ghana football was justly recognised during his lifetime and will continue to live in our memories.

Allow me on behalf of the GFA and the Ghanaian football family, to extend my deepest condolences to the family of Attuquayefio, and most importantly to his wife, children, friends and loved ones.

Although these words are little comfort in the face of this pain and anguish, I want you to know that the entire Ghana football family is with you.

We hope that in some way, our words of support may help bring a little bit of peace and solace in this time of sadness.