Nurses in Accra to go on strike 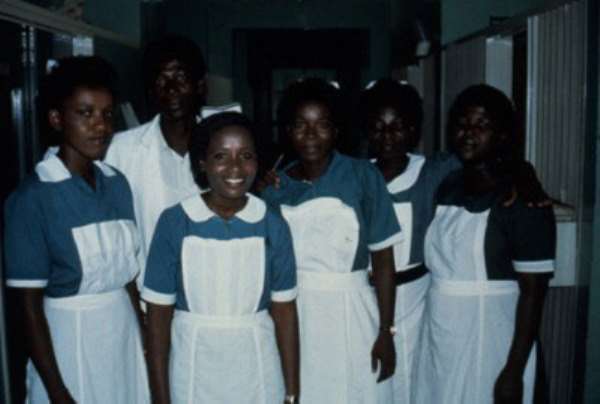 Accra, Aug. 18, GNA - Nurses in the Greater-Accra Region on Wednesday gave the Government up to Monday August 23, to respond to their grievances "or else they advised themselves."

The red-band wearing nurses, who came from all over the Region for a General Council Meeting, told a press conference at the Korle-Bu Teaching Hospital that they were being treated as "secondary professionals."

Madam Mary Ann Sackeyfio, Regional President of the Ghana Registered Nurses Association (GRNA), who addressed the meeting pleaded with her colleagues to give the Government two-weeks to which the floor responded: "No, No" amidst songs of "Ye ni abre koo"

Madam Sackeyfio reiterated their call on the Government to embrace the report of the Technical Committee set up by the Ministry of Health and the Ghana Health Service and work out modalities for the disbursement of the Additional Duty Hours Allowance (ADHA) for health workers as early as possible.

"It is not in the interest of the Nurses themselves to embark on strike action since the disadvantaged patient could be their own relation or a loved one," she said.

Madam Sackeyfio said Nurses were not capitalising on the fact that it was an election year, but were only asking for their legitimate entitlements to be paid timely to them to motivate them to give of their best.

She urged the Government to sign the white paper that would enable all categories of health workers to enjoy the approved hours allotted to them by the Committee without any further delay since tension was mounting in the Region on the wrong distribution of the ADHA to nurses. Madam Sackeyfio said with the current agitation among Nurses in the Region the Executives might not be able to contain the situation if the disparities in the disbursement of the ADHA were not properly implemented.

"Nurses had found the (ADHA) a disincentive considering the hours allotted to them compared to the other health professionals, who always enjoy 200 hours irrespective of the number of hours they clocked and their staff strength,"

Madam Sackeyfio cited doctors as one category of health professionals that enjoyed 200 hours across board while "the maximum that Nurses enjoyed in the Region was 84 hours".

She said "the setting out of ceilings for institutions instead of the actual hours done should be reviewed and adequate fund allotted to the institutions to enable them to pay the due ADHA as an incentive to motivate the few nurses, who are patriotic enough not to have joined their colleagues in the brain drain".

She called on the Government to stop treating Nurses as secondary professionals since doctors would not be able to man the hospitals alone if the Nurses embarked on a strike.

"There are even some health institutions that were being manned alone by Nurses," she said.

She also advocated for the payment of same ADHA to all Nurses equally across the country.

Madam Sackeyfio called for the implementation of the proposed Rural Incentive for Health Professionals without any further delay.