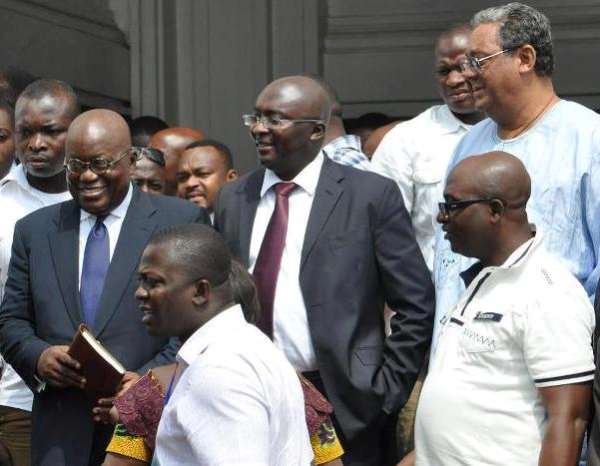 Very soon politicians will start the politics of canvasing for support. As usual, after all said and done, more will be said than done. We will expect the kind of politics where politician, as they have always proven to be, will deploy ethnicity to access the highest office in the country.

Ethnicity then becomes a political capital in the hands of politicians as they lure and woo Ghanaians to vote for them. Following the pervasiveness and ubiquitous expression of ethnicity in Ghanaian politics, political scientists and political commentators have inundated us with evidence to show that politics in Ghana is 'tribalistic'. In other words, electorates in Ghana are said to vote on tribal lines.

Electorate will vote for a particular candidate or political party because of the candidate or the party's affiliation with the electorate's 'tribal' group. Since Ghana made recourse to democratic governance beginning from 1992, ethnicity has served as a major political capital to politicians. This is against the backdrop that the 1992 Constitution of Ghana prohibits the deployment of ethnicity in politics.

The dualism in Ghana's voting pattern, which has given rise to two political world banks, Volta Region and Ashanti Region for the National Democratic Congress, hereafter NDC, and New Patriotic Party, hereafter NPP, respectively seem to adduce evidence to the so-called 'tribalistic' disposition of Ghanaian politics. But for the past few weeks, as I contemplate the nature of politics in the 21st century, a century dabbed as 'The age of information,' I have been questioning myself whether indeed politics in Ghana is deeply wrapped in the clothes of 'tribalism'. Indeed, my thought is foregrounded in the fact that politicians from the two dominant parties, NPP and NDC, who have had their share of governing the country since Ghana bounced back to democratic dispensation in 1992, have consistently failed to develop the so-called world banks.

The Rawlings' administration did very little or nothing to improve the living conditions of the people of the Volta Region. Thus, in the run up to the 2012 elections, we had some Voltarians, young and old, threatening to boycott and also vote against the NDC, because the party had failed to provide them with their share of the national Akple (the Ewe staple). We also are privy to the fact that the NPP did very little to uplift the standard of living in the Ashanti Region, where they claim to have their world bank. The same can be said about other regions in the country. Granted that 'tribalism' is the driving force of politics in Ghana, why have these politicians consistently failed to develop regions that vote for them? In other words, to what extent has 'tribalism' influenced regional development in Ghana?

Much as 'tribalism' has had some influence on Ghanaian politics in time past, I think that Ghanaian politics is losing its stronghold in so-called 'tribalistic' politics because the Akan, the dominant ethnic group in Ghana, is internally fragmented. Throughout history, particularly since the hegemony of the Asante Empire in the 17th century, the Akan of Ghana have failed to unite as a single ethnic group. The disunity among the Akan was reified and reinforced during the colonial period: The various European colonisers, feeding on divide and rule gimmicks, participated in putting an end to Akan unity. The British, for example, saw Asante's hegemony as a threat to their capitalistic interest, and so stirred up the jealousy of other Akan groups to fight the Asante. Post-colonial political elite added their might to crucifying Akan solidarity. Nkrumah, for example, created the Brong Ahafo region ostensibly to weaken Asante's dominancy. The Asante youth, including some Asante elite had threatened the powers of Nkrumah by forming the National Liberation Moment in 1954, which demanded a federation. So, Nkrumah's response to the federalist demand was to create Brong Ahafo in April 4, 1959 to diffuse the unity of Asante.

In contemporary Ghana, what unites the Akan is language. It is the 'abstract' Akan language that provides a source of unity to all Akan people. Even with that some dialects of Akan, such as Nzema, are becoming, if not already, languages on their own terms. Most Akan will find it difficult to understand standard Nzema. There seem to be some form of internal unity among the Ewe, but things are changing very fast. We now have a significant number of Ewe people supporting the NPP. It is, therefore, difficult to pigeonhole the Ewe as a homogenous group. Just like the Akan, for most Ewe people what unites them is not political party, even though that may play some role, but what unites them is the common language, Ewe. The mutual intelligibility of the Ewe language within the group provides unity to all Eve people, including those in Togo.

Again, the failure of the political elite to deliver their promises is also emboldening the Ghanaian electorate to vote not necessarily on 'tribal' lines, but on issues. Lastly, the political elite, while they deploy 'tribalism' to win elections, do not abide by the tenets of 'tribalism'. The logic of 'tribalism' is that you extend help to your 'tribal' mate, but most of our politicians don't do that. They form a clique of solidarity that is largely bounded by elitism. For example, there is no difference between the NDC and NPP in terms of political behaviour and ideology.

These two political parties throw dust into the eyes of Ghanaians by pretending to stand for diverse political ideologies: Both NPP and NDC are capitalist oriented. Both parties are interested in amassing wealth at the expense of the majority poor. Both the NPP and NDC represent two cultures: foreign culture (elitists class), which is the culture of the political elite, who are in the minority, and traditional culture (peasant class), which is the dominant culture of the majority.

Have you not witnessed the unity that exists between the NPP and NDC when it comes to issues that serve the collective interest of these two parties? Parliamentarians of these two parties will pretend to fight in public to win the sympathy of the majority of Ghanaians, and yet in the closet, they sing the same song and dance to the same tune. So, I am convinced that politics in Ghana is based on classism and not tribalism. Until we diffuse the perceived 'tribal' politics, in Ghana, which masks the truest taste of the Ghanaian political elite, we will be 'fooled' forever. Satyagraha!!!