Akans Under Siege Per Osafo Marfo? 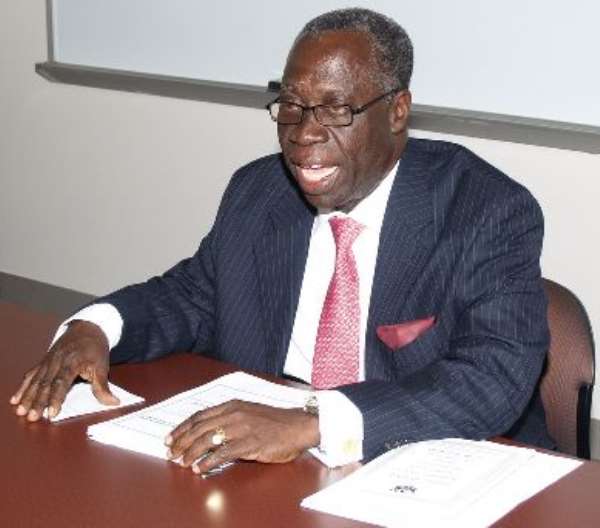 Let me first introduce myself by way of where I come from. My mother hails from the coastal town of Dixcove in the present day Ahanta West District in the Western Region. My father also hailed from Elmina in the Central Region of Ghana. Some people prefer to call us the Concert Region but we don't mind. After all, in spite of our 'concert nature' the Central Region is the cradle of quality education in Ghana. So some people even refer to Cape Coast, the regional capital, as the 'City of Beautiful Nonsense'. How beautiful nonsense can be, can only be determined by the Fantis.

The history of this country, if well studied, will tell you that different people from different parts of present day Ghana made it possible for us to enjoy what today we call Ghana. As for my people, the Ahantas, we used to be called 'Ahanta Trio' because we started the traditional Concert Party entertainment in Ghana. We constitute just 6.3% of the population of the Western Region. Ironically, Fantis who do not come from the region constitute 18% of the population of the region, and we have lived with them harmoniously all this while.

The Greater Accra has more none Gas than the indigenous Gas. Obviously, human beings, just like plants, gravitate towards sunshine since they require that for survival. So as Ghanaians, nobody can stop any body from moving from one geographical or ethnic area to the other to legitimately enjoy whatever natural resources are available. It is also possible that an area which is deemed to be 'bare' may end up producing the most needed wealth the nation requires for development in the future. For me, it does not matter who manages the nation's resources from wherever. What is important is that there must be absolute fairness in the distribution of the outcome(s) of those resources in a manner that the areas where those resources come from would not be deprived.

I have not heard exactly what Nana Yaw Osafo Marfo is alleged to have said which the NDC is running riot with. But if indeed he said that the five regions which produce the wealth of this nation should be given a place of pride in the governance of this country, then he has my support and I owe no one any apology in that respect. This country has been so unfair to the producers of the wealth nature has given us. It is easier for anyone to say that all the resources in this country belong to all of us. Yes, but those who live by those resources suffer the negative effects of the exploitation of those resources during their exploitation.

The NDC is a dangerous political party which will rather see this country go down in ruins than for it to lose power. They are very quick at branding the NPP as tribal bigots and make efforts at playing the minority ethnic groupings against Akans who constitute the majority for political gains. There is a historical fact in our contemporary history where there was an attempt at ethnic cleansing in this country. A certain Jerry John Rawlings overthrew a democratically elected government in this country some 34 years ago.

Three military officers of the Ghana Army from the same ethnic grouping, Ewes, by names L/Cpl Tonny Terkpor, L/Cpl Johnny Dzandu, L/Cpl Micheal Senya, on the orders of Sgt Samuel Amedeka, abducted three Asante, or if you like, Akan Judges of the Superior Court of Judicature and Major Sam Acquah, a retired army officer (another Akan) and murdered them in cold blood. Can that not be described as an attempt by the Ewe-led government of Jerry John Rawlings at ethnic cleansing? Ghanaians need to know also that in the course of the investigations, the name of Captain Kojo Tsikata popped up as the one who ordered the commission of that heinous crime. Of course, the prosecution did not bring him before court. It is also worthy of knowledge that when the three military officers went on their kidnapping escapade, they 'mistakenly' visited a house then occupied by another judge, Justice Adadevoh, an Ewe, but left him for the house of Justice Sarkodie, who was one of the abducted Justices. The rest were Mrs Justice Cecilia Koranteng-Addow, Justice Agyepong and Major Sam Acquah.

When those criminal murders were exposed by natural circumstances, the planned ethnic cleansing of Akans by the Rawlings-led government stopped, or so it seemed. The Rawlings and the Ewe-dominated PNDC government switched their political and murderous cleansing to economic cleansing of Akan businessmen and women.  The late B.A. Mensah, one of the foremost Ghanaian industrialists, had his business seized by the PNDC, Boakye Mattress was driven out of the country and his assets confiscated, Kofi Owusu, owner of Kowus Motors, also lost his business; it was subsequently given to three Ewe businessmen by Dan Abodakpi  as the Minister of Trade.

J.K. Siaw had his Tata Brewery confiscated by the Ewe-led PNDC government and later sold to a foreigner, while the Appentengs were driven away from the Songor Lagoon after the PNDC had engineered a mass protest against the company. Indeed, the body of a pregnant woman was deposited at the site of operation of the company to create the impression that it was the management of the company that murdered the woman. This was to further incense the Adas to ensure that the Appentengs never operated in the area—another ethnic cleansing by the Ewe-led government of Rawlings.

Have we forgotten about the late Dr J.A. Addison, Kwabena Darko, Appiah Menkah; when Rawlings openly asked Ghanaians not to patronise their goods? Mr Safo's Combined Farms was collapsed by the NDC. These were all efforts to destroy Akans on ethnic grounds.  As the NDC joins the CPP to celebrate the 49 th  anniversary of the overthrow of Dr Nkrumah the Osagyefo, why has the name Kotoka not been changed by the so-called Nkrumahist governments after 1972? It is obvious that tribalism is the reason. When Prof Atta Mills stood at Mumford, a fishing community in the Central Region, and told them that their Cold Stores had collapsed because Kufuor was not a Fanti and that he had transferred all the Cold Stores to Kumasi, what was he doing? Tribal bigotry?

Yes, and candidate John Mahama tells northerners that 'I am one of you, vote for me, and not for an Akan', and that is not ethnic bigotry. Atta Mills offered a public building to the Omanhene of Cape Coast to use as a Palace; if that had been done by an NPP leader to an Akyem or Asante chief, just guess the outcome.  Kufuor was chased out of a public facility by Ga Youth in Accra, supported by the NDC.

The NDC gave GH¢200 million from resource-rich areas to support the under-developed areas of the Northern Regions. The funds were entrusted in the hands of people from those areas. What happened to the money?  Invest GH¢200 million in the Western Region and some of our problems would be solved. Those who misused the SADA funds did not care because the funds were not generated from their soil; that is a fact. If the state had denied them the use of their lands and resources and had compensated them with that money, they would have used it sensibly. Western Region is still bare.

So where did Osafo Marfo go wrong for these children without parents, uncouth in their upbringing, and worthless in their reasoning to spew invectives on a man who has an impeccable record in public life. Akans have succumbed to the chicanery and the psychological warfare of the minority for so long. It is time to be on the offensive rather than being on the defensive when those accusing us are the worst culprits of the issues they accuse us of.