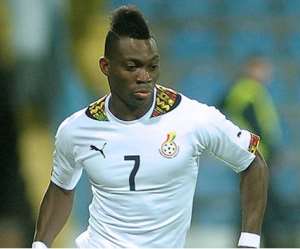 They used to play with all their hearts and minds. They did not expect any reward as they went out to conquer Africa. The jerseys they wore were made of acrylic material and they felt the heat even when it rained because it was skin-tight, which did not give any room for breathing comfortably.  There was nothing good to write home about as far as their boots were concerned. In fact, some even played barefooted.  They simply sacrificed for their country.

The names of these patriotic citizens are very long but a few will do to remind the current crop  of footballers in the Black Stars team that people literally spilled their blood and did put their noses on the grindstone to bring the team this far.  In those days when Ghanaians worshipped the Black Stars players, we had the likes of Baba Yara, Asebi Boakye, Osei Kofi, Aggrey Fynn, Dogo Yaro etc.   Because they did not put money before patriotism, some of them died poor.  Others did not even own a car, not to talk of a house.  Aggrey Fynn for example ended up moulding blocks for sale in Cape Coast. The case of Baba Yara was particularly pathetic.  The guy got wounded in a motor accident when the team was returning from Togo where they played a match.  His spinal cord got broken and he became paralysed and rode in a wheel chair until he died.  Go to Kintampo in the Brong Ahafo Region and see his family house and you will weep.  The best the country could do for him posthumously was to name a stadium in his honour.

Another generation of Black Stars which sacrificed a lot but gained nothing was the one led by Akwasi Owusu. This generation, made up of players like Dan Owusu, Ibrahim Sunday, Kuuku Dadzi, Abdul Razak, Opoku Nti, Yaw Sam, Kofi Abbrey etc, played their hearts out and entertained Ghanaians to the best of their abilities.  The case of Akwasi Owusu is unique and very sad.  At the Accra Sports stadium where the Black Stars played their Nigerian counterparts in the early seventies, Akwasi Owusu received one of the dirtiest slaps in his life.  The man who was noted for his powerful shots sent goalkeeper Okala of the Green Eagles reeling at the goalpost with a powerful shot at goal and when he finally grabbed the ball, a visibly angry Okala moved forward and gave Akwasi Owusu a hefty slap.

Instead of retaliating, Akwasi Owusu turned back and went away, waiting for the referee to whistle for the game to continue.  The late Head of State, General Acheampong, gave him a national honour.  Today Akwasi Owusu is a lotto receiver at Sunyani.  He lives from hand to mouth and the nation has forgotten the gentleman.  The last time I went to Sunyani, I decided to visit his lotto kiosk to just catch a glimpse of the hero who made Ghana proud in his heydays.  I saw a huge figure inside a small lotto kiosk and bowed my head in shame.  No wonder some people are of the view that Ghana is not a nation worth dying for.  During those days of patriotism, we had a team spirit as well as a national spirit.  Players created chances for their colleagues who were in good positions to score instead of forcing to score themselves for personal glory.  There was nothing like appearance fee or a promise of goodies if they won a match or trophy.  No player was seen driving his own car, and even the buses they commuted on to their training grounds were the rickety type.

When the Black Stars went for the African Cup tournament in Libya, nobody promised them anything.  Abedi Pele was just sixteen years old when he played in Libya.  After winning the cup, the Black Stars players concentrated on their local teams and never demanded anything.  They were very content with the little they had.  As the years rolled by, some of them, including youthful Abedi Pele, flew outside to play for foreign teams.  Today the name of Abedi Pele is always mentioned with respect.  Like his namesake in Brazil (Pele), the name of the soccer maestro will be written in gold after he is dead and gone.  In fact, Ghanaians will forever be grateful to this man who brought joy to soccer connoisseurs.

The current crop of Black Stars are swollen-headed because of wealth and they flaunt such wealth openly. They ride flashy cars and live like millionaires of yesteryears.  Just look at what happened to Asamoah Gyan when he returned from the World Cup in Brazil.  The guy decided to have a good time with some girls and his friend Castro.  What happened is not worth recounting here because it will look like one is raking wounds.  Anytime Ghanaians mention the name of the lost musician, the name of Asamoah Gyan will be added to it.  That is the price of swollen-headedness.

When the government of the NDC carted a whopping four million dollars to faraway Brazil to pay the appearance fee of the Black Stars after pressure was mounted on the government,  I realised patriotism  had been crucified and grabbing a trophy would be a mirage.  Watching John Boye kissing his share of the appearance fee on TV when the boys went to Brazil, my eyes became filled with tears for the predecessors who laid down their lives for the national team.  And as fate will have it, it was the same John Boye who scored an own goal in our game against Portugal.

One person who destroyed the Black Stars team and is still walking the corridors of power is Joseph Yamin, the former Deputy Minister of Sports.  His comments before the Black Stars went to Brazil killed the team's spirit.  That dead spirit is still haunting the good people of Ghana.  This was the guy who told Ghanaians that the government was sending five hundred supporters to Brazil but the supporters would undoubtedly be supporters of the NDC.  The guy failed to realise that more than five million Ghanaians voted for the NPP, the largest opposition party, during the 2012 general elections.  By those unfortunate comments, it stood to reason that the spirits of these NPP supporters were not with the Black Stars team.  To add insults to injury, two hundred NDC supporters who were taken to Brazil with the taxpayer's money decided to seek political asylum in that country.  An attempt to bring them back failed woefully.

The naked truth is that the hearts of majority of Ghanaians were not with the Black Stars when they went to Equatorial Guinea.  I heard one guy telling his friend before the Ghana/Ivory Coast match the following:  'Charlie make we go sleep.  After all, whether they win or lose which one concern me?' The guy discussed at length what the players were receiving after each match and concluded that the players should let their money support them.  He threw patriotism to the dogs.

Equatorial Madness
I must admit that even though the Black Stars did not bring the cup home, the team and its supporters proved to the world that Ghanaians are well cultured and disciplined than other nationals of other countries in Africa.  The British who colonised Ghana left behind a disciplined people.  As compared to the supporters of the national team of Equatorial Guinea, one can simply describe this former Spanish colony and its people as barbaric and undisciplined. Instead of venting their anger on their autocratic president who has subdued them for so long a time, these supporters of the Equatorial national team decided to vent their anger on the Black Stars and their supporters even when they were three solid goals down.

If the scores had been a draw or one goal to nothing against these cowards who are being treated like zombies by their president, one would have pitied them. That they would attack the Ghanaian supporters when their team was three goals down, is ample evidence that Africa needs to train more psychiatrists and export them to Equatorial Guinea to treat these mad fellows. These are people who are sitting by the river banks and still feeling thirsty; but instead of sitting up to deal with the dictators who rule them, they rather exhibit their courage on poor unarmed supporters of the Black Stars.  I learnt marijuana is commonly grown there, and that even old ladies and old men smoke the stuff openly.  If that is true, then I am not surprised at their behaviour because they might have been under the influence of ganja.

As for me instead of taking to ganja, I prefer to continue puffing my favourite cigars.  One of the top 10 cigars of the world is produced by Drew Estate Parejo Oscuro.  It is called Liga Privada No. 9.  This dark oily maduro is layered with dark roasted coffee and it is relatively new to the cigar world.  Just keep your distance while I do justice to a stick of Liga.