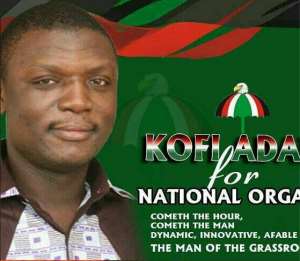 Who are the real disloyal members of the NDC? Those who abandoned the principles on which the party was founded, and told the founder the party doesn't belong to him, or those who stood by the founder? Did l hear General Mosquito asking delegates not to vote for Kofi Adams because he is disloyal to the NDC? Is General Mosquito more loyal to the NDC than Kofi Adams who rose through the ranks, from ward, branch, constituency, regional to national executive positions?

Has he ever held any ward, branch, constituency, or regional executive position before, or, he thinks being a general secretary makes him more NDC than Kofi Adams? These are the people who sees nothing wrong with Bede Zieden and Dr. Obed Asamoah breaking away from the NDC and forming a DFP, and returning to the fold. Didn't General Mosquito honour Bede Zieden with an appointment as director of elections committee at the NDC headquarters when he rejoin the party?

What is more treacherous than breaking away from your mother party and forming a new one? There was an internal democratic contest and people supported either GAME or FONKAR.

That contest is now behind us with President Mahana leading the NDC. And then you have people with no shame wagging vilification campaign against Kofi Adams because he choses to be loyal to the founder of the party?
Did Kofi Adams ever leave the NDC? Did he join another political party? Since when did being a supporter of GAME makes you more NDC than a supporter of FONKAR?

It is this same immoral entitlement mentality that gave birth to the FONKAR - GAMES.

Yes, Kofi Adams' voice was caught on a certain tape and so what? Wasn't the said tape investigated by the party? Wasn't he exonerated? So, what is the point? If the National Executive Committee of the party thought it wise to clear him of any wrongdoing and allow him to file his nomination papers, who is General Mosquito to say otherwise?

Why don't you just go ahead and disqualify him if you believe he wasn't a loyal member of the party?
The truth is that, Kofi Adams has risen through the ranks, and he has emerged with excellent grooming capabilities. He has been a TEIN founding member, TEIN organizer - University of Cape Coast, Adisadel village branch chairman, Asikuma-Odoben-Brakwa constituency youth organizer, Asikuma-Odoben-Brakwa constituency secretary, Central Regional Youth Organizer, Deputy National Youth Organizer, and currently the Deputy General Secretary of the NDC.
Who is more loyal than such a man?

How can you even preach disloyalty against somebody with such rich grassroots background? I've never seen any one as thorough as Kofi Adams. Such Incredible grassroots activist. His loyalty, work, diligence, humility, and his
connection to the grassroots is unmatched.

Kofi Adams has been a proven loyal grassroots organizer over the years. As a Regional youth organizer for the Central Region while the party was in opposition, Kofi superintended over youth mobilization in the region, and delivered the entire region to the party in 2008 elections.

This is someone who out of genuine dedication to the party's cause, resigned his job as a professional teacher at Adisadel school to concentrate fully on party duties.

Kofi Adams has serve the NDC and it's founder the best way he knew how, with humility, dedication and loyalty, when the likes of General Mosquito were dragging the founder's name through the mud. That is what we call loyalty.

If there's anyone who has been disloyal to the NDC, it is General Mosquito, who was brought up by Jerry Rawlings and later installed as General Secretary, but would grow up to tell the founder that he is not the owner of the NDC, and will turn around to claim ownership of the party to the extent that he want to decide who the delegates
should vote for.

General Mosquito and those who think like him should wake up and smell the coffee. The movement to get Kofi Adams endorsed as National Organiser is being led by the delegates themselves.

It is a grassroots movement, and nobody can stand in the way of Kofi's victory come 20th December!

The NDC delegate is the most sophisticated 'political animal' ever. They have a mind of their own, and they know better. Not even the combined effort of all the so-called Mills' faction can stop Kofi Adams from becoming the national organiser of the NDC.

Kofi Adams is the man to lead the 2016 operation for President Mahana against the elephant. You can take it or leave it. Loyalty or disloyalty, cometh the hour, cometh the man. Kofi Adams, it is, for the National Organiser job.
Enough said!