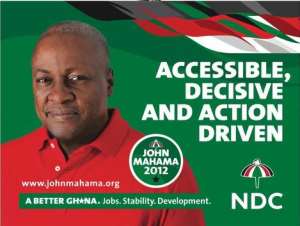 The NDC party have outshined the achievement of the NPP in a matter of six years. The NPP party had the opportunity to govern this country for eight years yet in a matter of just six years, the NDC have achieved more than what the NPP has done.

The NPP have been a huge beneficiary of donor inflows and debt forgives but despite these favorable conditions, the NDC has more to show in terms of basic education in the country than what the NPP did in eight years. Some of the areas worth mentioning are listed below:

The under listed interventions have accounted for the significant growth in access since 2009,

1. The construction of the schools made possible because of funds from Government of Ghana (GoG) and GETFUND.

4. In 2013 alone 12.5 million English, Mathematics and Science Core Textbooks were distributed in Public Primary and JHS Schools which enabled Ghana to exceed the universal Textbook-Pupil ratio of three textbooks per pupil. Currently Ghana's textbook-pupil ratio stands at four textbooks per pupil. Before this feat the ratio stood at 1 textbook for three pupils under the NPP government.

6. An amount of GHC 9,031,338.00 was used to subsidize the registration cost of 391,079 candidates for the Basic Education Certificate Examination. In 2014, 462,961 final year JHS students was subsidized at a cost of GHC 14,803,635.00 representing 70% of the bill with parents paying GHC15 which is 30% of the examination fees. As part of efforts aimed at providing opportunities for BECE candidates who do not meet the criteria for selection into Senior High Schools, the Ministry of Education in collaboration with WAEC has reviewed the policy on BECE resit and introduced a new system under which private candidates will now be permitted to resit beginning from February 2015.

7. As far as the School feeding program is concerned, the total coverage has increased from 441, 189 children to 1,739,357 children. It is also now fully funded by the government of Ghana after the Dutch government withdrew their finding because of the corruption in the program under the NPP

8. To improve ICT education, 60,000 laptops were distributed to Basic Scholl pupils in all ten Regions of Ghana under the Basic School Computerization Program. 50,000 Basic School teachers across the country also benefited from ICT training.

9. Under the Complementary Basic Education for Out-of-school Children, 25,000 out-of-school children were enrolled in 2013 and are currently been taught under the management of nine (9) implementing partners including school for life. The objective is to mainstream them into the formal school system upon graduation. Teaching and learning materials have been procured and distributed to the Implementing Partners and learning centers. The Programme was launched by the Hon Minister in Sunyani is currently being piloted in the three Northern Regions and the Brong Ahafo Region.

10. The Ghana Library Authority procured 72,410 copies of books of various titles including 65 sets of encyclopedia to stock the ten Regional Libraries and 50 District Libraries.

The above achievements are the significant improvements the NDC government has chalked at the basic level of our educational sector and we believe more will be than to improve the lot of Ghanaians in the years ahead.