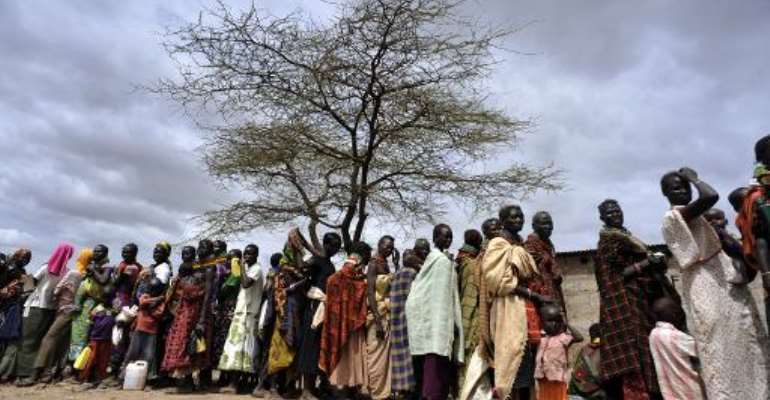 Turkana women and children wait for supplimentary feeding for infants at a relief and health centre in Kakuma, Turkana District, northwestern region of Kenya on August 8, 2011. By Simon Maina (AFP/File)

Geneva (AFP) - The UN refugee agency on Tuesday voiced alarm at violence raging in a sprawling complex of refugee camps in northwestern Kenya that has left eight dead in the past week.

Violence at the Kakuma camps sparked by reports of the attempted rape of a young refugee girl last Tuesday has claimed the lives of eight refugees from Burundi, Democratic Republic of Congo and South Sudan, UNHCR said.

The agency is "very troubled by what has happened over the past few days," spokesman Adrian Edwards told reporters.

Reports of the attempted rape in the overcrowded camps, which house some 180,000 refugees from more than 20 countries, had sparked fighting among rival groups of South Sudanese youths, in which one person was killed.

Kenyan security personnel had stepped in to bring the situation under control, but violence erupted again at the weekend when a child was hit by a motorcycle taxi, Edwards said.

The Burundian refugee riding the motorcycle was attacked and suffered machete wounds to the head and arms, while several other refugees were injured, he said.

"Fear of the violence prompted refugees in the affected areas to move their families to nearby police posts," Edwards said.

Kenyan police had beefed up security, especially in Kakuma 4 where most of the trouble occurred, made several arrests and confiscated weapons, including machetes.

But the situation deteriorated again on Monday morning, when four more refugees were killed, bringing the total number of people killed over the past week to eight.

"Together with the Kenyan authorities, we are continuing to work with the refugees to restore calm, and appealing for calm and peaceful coexistence among all communities in the camp," Edwards said.

You're A Covenant Keeping Leader — Ahafo Chiefs To Akufo-Add...
5 minutes ago