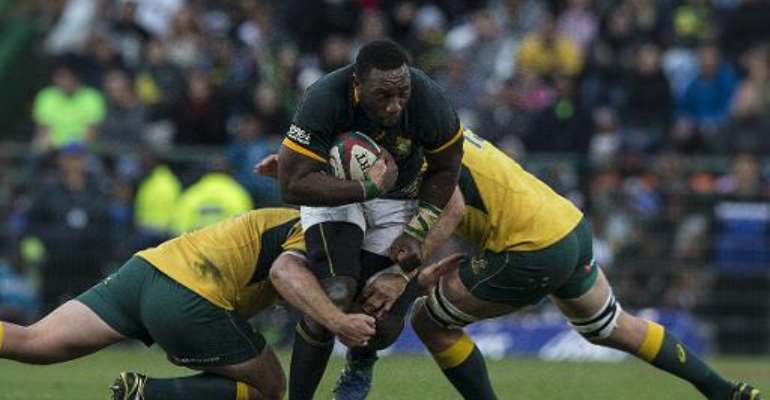 Skipper and centre Jean de Villiers crossed the try-line twice as the Springboks turned a 10-5 half-time deficit into an ultimately convincing, bonus-point victory.

It was a hard scoreline for the Wallabies to accept as they led 10-8 with 10 minutes left only to fade as De Villiers twice and replacement fly-half Patrick Lambie scored tries.

The victory moved South Africa within one point of New Zealand, but the All Blacks can retain the southern hemisphere title with a bonus-point win in Argentina late Saturday.

It was the seventh consecutive Australian loss at Newlands stadium since winning 26-3 in 1992.

The Springboks spent the first three minutes in a 17-phase assault against the Wallabies before surrendering possession.

When South Africa went ahead on 12 minutes, it was through a driving maul much favoured by the green and gold.

A line-out was won and a surge took the ball over the try-line with flanker Marcell Coetzee touching down. Fly-half Handre Pollard failed to convert.

Scrum-half Francois Hougaard made two brave tackles to halt the Wallabies, but the visitors got on the scoreboard after 25 minutes when fly-half Bernard Foley potted a penalty.

Australia forged ahead just a minute later as centre Tevita Kuridrani broke clear in midfield and set up right-wing Adam Ashley-Cooper to dive over in the corner.

Foley converted and Australia were 10-5 ahead as they sought a season double over South Africa having won 24-23 in Perth this month.

De Villiers opted to kick for touch rather than at goal late in the opening half, but the move backfired as they lost control at the line-out.

Australia finished the opening half on the back foot without South Africa seriously threatening to score a match-levelling try.

Left-wing Bryan Habana, who suffered a blow to the head in the build-up to the Wallabies try, was forced to retire at half-time with fellow veteran JP Pietersen coming on.

Pollard kicked a penalty four minutes into the second half after a ruck offence and just two points separated the teams.

However, the Springboks were soon back on the defensive as the Wallabies made a 22-phase attack that failed to deliver any points.

South Africa made an anticipated change on 55 minutes with veteran flanker Schalk Burger coming off the bench to replace debutant Teboho 'Oupa' Mohojo.

Concerns about Mohojo being rusty having last played two months ago proved unfounded as he made a telling contribution.

In an increasingly attritional battle, the Springboks had a chance to take the lead just past the hour mark but Lambie surprisingly missed a penalty kick.

However, playmaker Lambie atoned 10 minutes from time by dropping a goal to reward a 29-phase onslaught that featured more outstanding Australian defending.

Within two minutes a one-point lead stretched to six as De Villiers completed a dazzling attack by dotting down for an unconverted try.

Centre Jan Serfontein broke in midfield, right-wing Cornal Hendricks carried the moved forward by weaving in and out, and replacement hooker Bismarck du Plessis made the scoring pass.

Further tries from Lambie and De Villiers, one of them converted by Lambie, completed a stirring finish by the home team.