What Has TB Got To Do In An AIDS Conference? 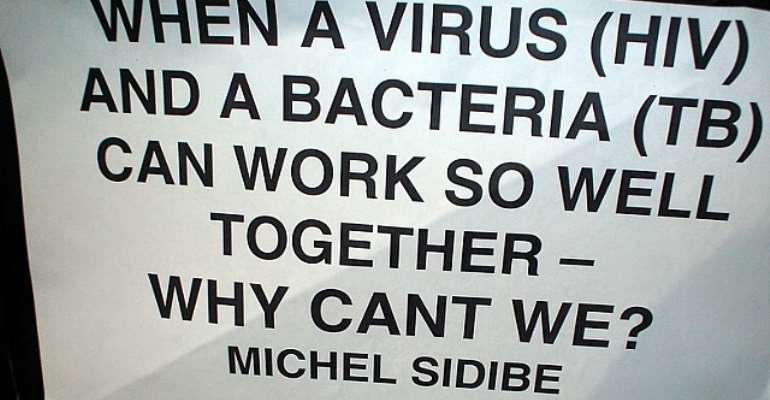 Well almost everything. Tuberculosis (TB) remains the most common AIDS-defining illness and the leading cause of death in people living with HIV (PLHIV) with 1 in 5 HIV-associated deaths in 2012 attributed to TB. At least one third of the 35.3 million living PLHIV worldwide are infected with latent TB. An estimated 1.1 million (13%) of the 8.6 million people who developed TB in 2012 were HIV-positive too.

According to the Revised National TB Control Programme (RNTCP) Annual Report 2014: "India accounts for about 10% of the global burden of HIV-associated TB and every year 42000 people die of TB among TB/HIV coinfected patients. RNTCP has endorsed the policy of prioritizing to offer rapid molecular test to all presumptive TB cases among PLHIV for early diagnosis of TB."

Stressing upon his country's commitment to working with governments in the region to strengthen health systems for tackling all diseases, including HIV and TB, Australia's Deputy High Commissioner to India, Bernard Philip, told Citizen News Service (CNS) that, "The Australian Government promotes proven, cost-effective interventions to reduce the burden of TB, by improving primary health care, promoting an effective public health approach to TB management, and by boosting TB detection. Drug resistant TB and TB-HIV co-infection are difficult and complex problems, and we need improved surveillance, detection, diagnosis and treatment in order to fight them effectively."

He also informed that, 'As a symbol of the Australian Government's strong commitment to funding research which can aid global efforts to tackle this disease, it has also supported vital TB research in India through the Australia India Strategic Research Fund (AISRF) by putting more than $A2.3 million into a joint project between the Commonwealth Scientific & Industrial Research Organization (CSIRO), in Australia, and the Council of Scientific and Industrial Research, in India, to investigate point-of-care diagnostic tools for TB.'

The impact resulting from enormous investment made into HIV is being undermined by a disease that is both preventable and curable. Hence it is imperative that there is programmatic intergration of the strategies aimed at controlling the two diseases so as to drastically reduce HIV-associated TB deaths.

Speaking to CNS about integration of services for care and control of TB and HIV, Dr Mario Raviglione, Director, World Health Organization (WHO) Global Tuberculosis Programme, said that, 'The post-2015 new global TB strategy of the WHO reinforces, amongst other things, that instead of two vertical and straight programmes that do not talk to each other, there have to be close linkages between AIDS programme and TB programme in such a way that it guarantees a one stop point-of-care to those who are in need. The new strategy reiterates the philosophy of proper patient centric care -that every single individual has the right to proper diagnosis, treatment, support and counselling. HIV is prominently expressed in this strategy and lists special measures that need to be taken for TB patients who also suffer from HIV.'

While expressing his happiness about the prominence which events on 'TB associated with HIV' have been given in the forthcoming XX International AIDS Conference (AIDS 2014) in Melbourne, Dr Raviglione lamented that for decades TB had been relatively underplayed or ignored in the HIV/AIDS community. It is only since the past 3-4 years that there has been more awareness of the fact that TB is the number one killer of PLHIV. And yet, even now, surprisingly a large majority of people, when they speak about HIV/AIDS, ignore the fact that one fifth of PLHIV may eventually die of TB which is preventable and curable, regardless of the person being HIV positive or not.

In fact, the WHO data shows that less than 50% of the 1.1 million estimated HIV-positive incident TB cases were identified in 2012 while only 28% of the estimated TB/HIV cases received antiretroviral therapy (ART). More than 80% of countries still do not report providing IPT (isoniazid preventive therapy) to eligible people living with HIV.

Dr Raviglione expressed his astonishment that, 'ART is still not automatically provided to those PLHIV who have TB. This is one of the most important recommendations we are making when we talk about integration of services between TB and HIV. A TB programme should automatically test TB patients for HIV. Once a person with TB is screened for HIV and found positive he/she should automatically be put on ART. We will save many lives in this way. Also as soon a person tests positive for HIV he/she should be offered TB testing and potential prophylaxis for TB should be made automatically. It is heartening to note that there has been a significant increase in the past decade on this intervention with as many as 90% TB patients being tested for HIV in some parts of Africa.'

He also promoted the use of new diagnostic technologies such as GeneXpert MTB/RIF for more efficient and timely detection of HIV-associated TB and multi-drug resistant TB (MDR-TB). The geneXpert is of great use for proper and rapid diagnosis of TB as well as MDR-TB especially in PLHIV because TB in them is more difficult to diagnose as compared to non HIV patients. If the test shows rifampicin resistance, treatment for MDR-TB can be started immediately, thus giving a big benefit in terms of timely management of the disease.

Dr Raviglione emphasized upon the importance of disseminating correct information about TB associated with HIV. He said, 'Perhaps the HIV/AIDS community is not fully aware of the big risk TB poses to them. PLHIV are already immuno-suppressed and having TB makes them more vulnerable to other life threatening infections. People need to be more informed about this. So if more and more people, especially the caregivers of PLHIV and TB patients, get the correct information through conferences like AIDS 2014, then they will not take TB lightly and understand the importance of early ART in PLHIV co-infected with TB. If the message is clear and well disseminated then we will be doing our job.'

Shobha Shukla, Citizen News Service (CNS)
(The author is the Managing Editor of Citizen News Service - CNS. She is reporting from the XX International AIDS Conference (AIDS 2014) with support from the World Health Organization (WHO) Global Tuberculosis Programme. She is a J2J Fellow of National Press Foundation (NPF) USA and received her editing training in Singapore. She has earlier worked with State Planning Institute, UP and taught physics at India's prestigious Loreto Convent. She also co-authored and edited publications on gender justice, childhood TB, childhood pneumonia, Hepatitis C Virus and HIV, and MDR-TB. Email: [email protected], website: www.citizen-news.org).

Bawumia calls for greater unity, cooperation between Muslims...
37 minutes ago