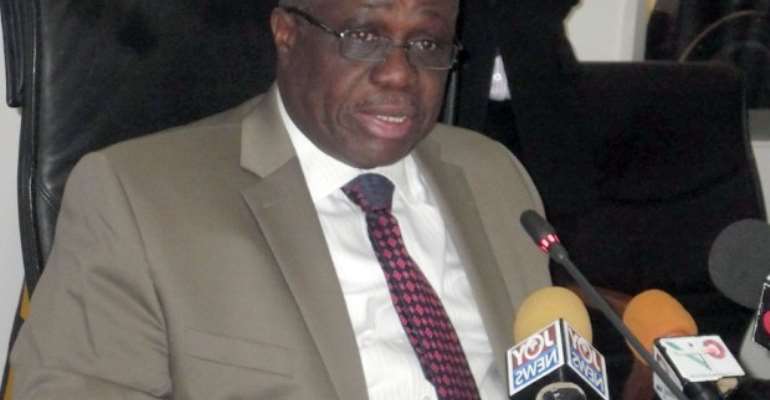 Dr Kofi Wampah, Boss GoB
The Bank of Ghana has subtly admitted the failure of recent measures to save the Cedi from further depreciation. It is a sad reflection of how bad things have become lately and how clueless those in charge are as things continue to fall apart.

Policymakers are groping in the dark as it were, as they seek solutions to the challenges besetting the national currency. The state of befuddlement of government is evident in its introduction of pre-democratic era measures by the apex bank.

Followers of the country's economic history could not subdue a wry smile when the measures were announced.

The measures have failed totally, dealing a terrible blow to banking in a country most of whose population's confidence in this economic sector will dwindle further. The state is regrettably on a trial-and-error mode.

News about the apex bank's intention to restore the status quo after much propaganda by government that the measures were surely going to shore up the fortunes of the national currency started filtering in long before the official position made the pages of newspapers.

Now the cat is completely out of the bag and very soon the nonsense about providing proof of travelling before being given access to one's own dollar account would be discarded and given a place in the annals of the country's economic history. Call the country's state today as a failed economy and you would be dead right.

Our journey to this despicable milestone did not start today. It indeed started when observers of the economy raised red flags about the frightening level of fiscal indiscipline and what that presaged for us all.

Those who dared to paint a gloomy picture of the economy tomorrow, which is already today, were descended upon by state-salaried hounds. Prominent among such victims were Dr. Mahamudu Bawumia, who was severely vilified.

Now that the chickens have home to roost those behind the vitriolic remarks can only hide their heads in shame.

The buck stops on the desk of the Governor of the Bank of Ghana. He at this stage of the country's fiscal helplessness – even after denying earlier that things were so bad – should resign his appointment. That is the mark of a gentleman.

Unfortunately, since the country has no such precedence of resignations, he would just hold on to his appointment – even if that means doing so with little or no deference to his person.

The adoption of measures which are eventually abandoned midstream, is akin to a vehicle swaying from one end of the road to the other rather dangerously as the driver behind the steering wheels prays for salvation. For how long shall we have the country run on this mode? Your guess is as good as ours. Even as the status quo is restored, the harm has already been done and many would doubt the sincerity of the government and the banking industry as a whole in the country.