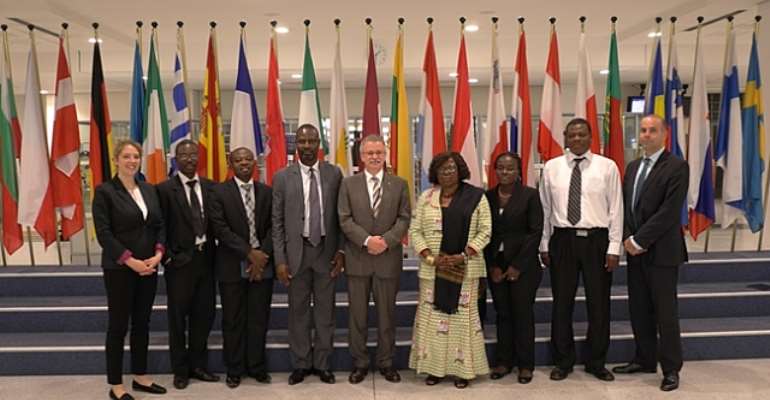 The President of the Association of Ghana Industries (AGI), Mr. James Asare-Adjei is urging all private sector players to help make the regional integration initiative within ECOWAS a reality.

According to the AGI President, ECOWAS is running out of time in its pursuit of a borderless region agenda for the free movement of goods and people, especially at the time that the region is in negotiation with the European Union on the Economic Partnership Agreements (EPAs).

He made this call when the Association undertook a working visit to Brussels under the AGI-BDI partnership project for policy advocacy from May 31 to June 7, 2014.

Led by Mr. James Asare-Adjei, the high profile AGI delegation had an intensive engagement on the operation of the European Union's single market with the view to gaining more insight to advance the private sector's advocacy drive on regional integration within ECOWAS.

While in Brussels, the AGI delegation also paid a courtesy call and held discussions with Ghana's Ambassador responsible for Belgium, Luxemburg and Mission to the European Union, H.E. Morgan A. Brown and his team.

The discussions explored business prospects between the Ghanaian private sector and the Belgian business community with the Ghana embassy as the key facilitator and AGI as a window for investors to Ghana, while supporting Government initiatives to expand trade with Europe.

The AGI President also seized the opportunity to brief Ghana's mission in Brussels on some of the activities being undertaking by the Association to complement Government's efforts to improve macro-economic stability within the Ghanaian economy.

Working sessions were also held with the European Commission, BusinessEurope, the Free State of Bavaria at the European Union, the work of the ACP-EU Joint Parliamentary Assembly, all intended to strengthen AGI's policy dialogue process for regional integration of ECOWAS.

Economic Partnership Agreements (EPAs) deliberations which have often ended in limbo across some regional frontiers concluded the delegation's mission in Brussels. During the final working session with officials of the European Commission, AGI took turns to explain reasons for the uncertainty on the subject in Ghana and indicated the need for further deliberations to enable an informed decision.

According to the C.E.O of AGI Mr. Seth Twum-Akwaboah, the trip was successful considering the insight gained on regional integration and the building of essential business ties at the private sector level, along with opportunities for business matching and networking.