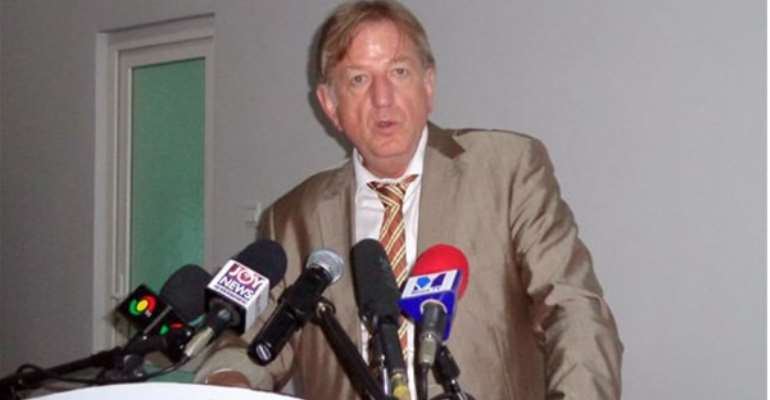 The controversy over whether or not Ghana should sign the Economic Partnership Agreement (EPA), took a dramatic turn, Thursday, with the EU Ambassador, Claude Maerten, heckled and escorted out of a stakeholders meeting held in Accra.

It was meant to be a national stakeholders meeting to deliberate on the controversial matter that has left the country divided but the attempt by  Claude Maerten to clarify what he considered factual inaccuracies over the EU's position on the EPA was met with stiff resistance.

Some civil society groups, particularly the Third World Network led by Dr. Yao Graham, held the view that the meeting was meant for local stakeholders in the country.

It took the timely intervention of the Trade Minister, Haruna Iddrisu to calm tempers.

The forum was to seek divergent opinions on the controversial EPA and possibly to rally support for Ghana to sign onto it.

George Kporye, Head of Corporate affairs at Golden Exotic's company, the largest producer of banana in Ghana told Paa Kwesi Asare that time is fast running and the country must sign onto the EPA before it is too late.

He said there will be dire consequences if the country fails to sign the EPA.

He feared they might be laying off workers if the agreement is not signed.

According to her, she will lose her businesses if the agreement is not signed.

The EPA is a scheme to create a Free Trade Area between the European and the African Caribbean and Pacific Group of States.

But critics say the agreement is discriminatory and is not in the best interest of the country.

Nigeria has given the strongest indication it would not sign the agreement. Ghana, even though has signed onto the partial agreement, has by end of the year to make a final decision on whether or not to fully sign onto the agreement.