As Club Rolls Out Milestone Activities
By Adebayo Dawodu 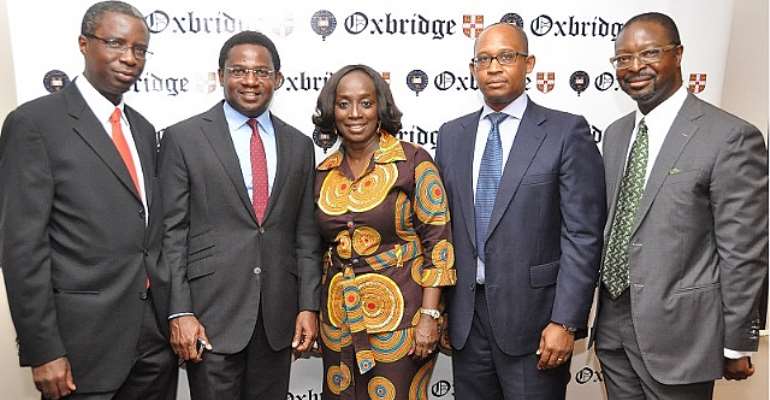 Lagos, Nigeria; 10th April, 2014: The Oxford and Cambridge Club of Nigeria has officially announced its series of epoch-making programmes which form part of key activities of year 2014 rolled out by the newly elected Executive Committee of the Club.

According to the President of the Club, Mr Akinfela Akoni, the Oxbridge Club in Nigeria continues to build a reputation for intellectual thought leadership, attracting leaders from the business, diplomatic and academic cadres to its events.

Dignitaries expected to attend and share their thoughts with the Association during the series of events include His Excellency, the Executive Governor of Lagos State, Mr. Babatunde Fashola (SAN), Hon. Minister of Trade and Investment, Dr. Olusegun Aganga; Hon. Minister of Petroleum Resources, Mrs. Diezani Alison-Madueke and leading CEOs.

Activities planned by the Oxford and Cambridge Club for the year 2014 commenced with a Business Forum held on Thursday, 10 April 2014 at Wheatbaker, Ikoyi, Lagos.

The Business Forum, which provided a unique networking opportunity for fellow alumni and guests, had as Guest Speaker, an alumnus, an inspiring author and renowned Entrepreneur, the CEO of Eventful Limited, Mrs. Yewande Zaccheaus. Together with other alumni at the Business Forum, she discussed relevant and contemporary issues in Nigerian business and socio-economic matters affecting the society today. She spoke on the theme “Recognising Opportunities – Eventful Stories.”

As a fitting guest speaker for the Business Forum, Mrs. Zaccheaus' wealth of experience traversed law profession, the banking industry, event management, motherhood among others. She has brought professionalism, credibility and panache to the practice of event management, using her innate organisational skills to redefine the execution of both corporate and retail events. She recently expanded her events business to include management of three prestigious event centres in Lagos, City Hall, Harbour Point and the MMD Centre, Ikoyi.

She is the author of 3 inspirational books, God's Waiting Room 1, 2 & 3, which she wrote after her own personal experience, to encourage women who have suffered delays in childbearing. Mrs. Zaccheaus has a law degree from University of Lagos and a Masters in Law from Cambridge University.

Meanwhile, the Club will be moving its activities to Abuja for the first time when it will host a Business Forum in the month of May this year. The Hon. Minister of Trade and Investment, Dr. Olusegun Aganga, an alumnus of Oxford University, will grace the Abuja Business Forum among other dignitaries and members from the environs.

Other major activities organised by the Oxford and Cambridge Club to come up this year include: The Spring Lecture 2014. The Club has invited His Excellency, Executive Governor of Lagos State, Babatunde Raji Fashola (SAN), to deliver the Spring Lecture.

Also lined up is the traditional gala social event, known as the May Ball, which marks the end of the academic year in both Oxford and Cambridge Universities. The May Ball(which is traditionally held in June) will have as guest of honour, the Hon. Minister for Petroleum Resources, Mrs Diezani Alison-Madueke, who is also an alumnus of Cambridge University. The event will also host Oxford and Cambridge Club members and spouses as well as its corporate sponsors and friends to a gala evening of good entertainment.

In addition, the Club has organised an essay competition tagged 'Oxbridge National Essay Competition' to inspire thousands of young Nigerians across the country. The competition will be open to all Senior Secondary School students under the age of 18. By October, there will also be a debate between Oxbridge Alumni and Harvard Alumni on topical issues affecting the Nigerian society.

To round-off the year's activities, the Club has planned a number of social activities which will afford members, friends and sponsors the opportunity to relax. In keeping with the theme, Dr. Ayo Teriba, the CEO, Economic Associates and an alumnus of Cambridge University, will be the guest speaker at a final business forum of the year scheduled to hold in Lagos. .

The Oxford and Cambridge Club of Nigeria had elected its new Executive Committee at the Annual General Meeting held on 20 February 2014 at the Metropolitan Club, Victoria Island, Lagos, which saw the re-election of Mr Akinfela Akoni as the President.

For more information regarding membership of the Club, please contact the Hon. Secretary at: [email protected]

Do DNA test for Rawlings alleged daughter before you bury hi...
37 minutes ago