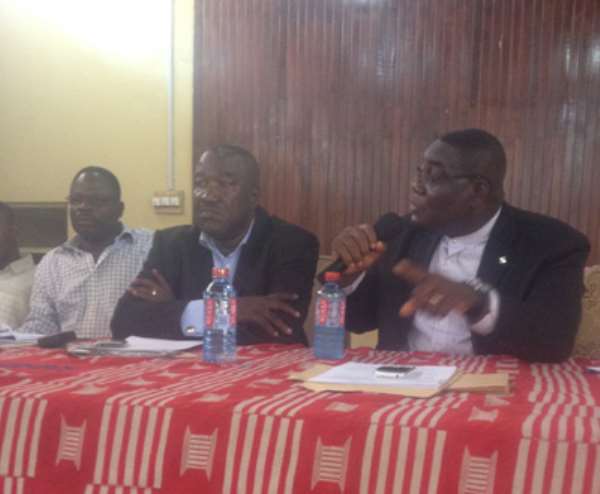 Ato Conduah (right) explaining a point while Seth A. Amoani looks on

Ghana Lottery Operators Association (GLOA) has appealed passionately to President John Dramani Mahama to stop what they described as 'persistent harassment and maltreatment of their members by security agencies.'

According to them, the National Lottery Authority (NLA) had allegedly been instigating the security agents, mostly the police, to treat members of GLOA inhumanly for engaging in private lottery.

They said many members are disappointed in the government because of its inability to respond appropriately to give them another chance to operate, stating that the National Democratic Congress (NDC) government introduced a law that permitted private lottery under Section 22 of the Veterans Administration of Ghana (VAG), Act 844 of 2012.

The issuance of license to lottery operators in the country has become contentious matter between the NLA and the VAG.

The NLA indicated that the National Lotto Act, (Act 722) of 2006 has given it the sole authority to regulate, supervise, conduct and manage National Lotto and to provide related matters.

However, the VAG contended that under Act 844, the law mandates them to hold lotteries and cannot be stopped by the NLA from issuing license to other entities in furtherance of the administration's objective.

In the ensuing confusion, the Circuit Court, presided over by Francis Obiri on Monday, March 31, granted the injunction to NLA but ordered them to make an undertaking totaling a whopping GH¢100,000 (¢10 billion) GH¢500,000 (¢5 billion) each to both the VAG and Luck Web Ghana Limited, who are defendants in the case pending the final determination of the case.

The GLOA said the harassment was getting out of hand and therefore held a news conference at the Teachers Hall in Accra on Tuesday.

About 1,000 private lotto writers stormed the venue to lend support to the leadership to fight for their rights.

Reading the statement, Seth Asante Amoani, Secretary of GLOA, said former President J.E.A. Mills came to their rescue by forwarding a bill to Parliament for the VAG Act 844 to be passed to enable millions of unemployed Ghanaians to engage in lotto writing for the sustenance of the economy.

He said 'the NLA is using unorthodox means to subvert the good intentions of the late Prof. Mills by keeping a large army of Ghanaians out of business. There is the need to tear down the monopoly created by Act 722 (2006) to restore private sector participation since the government itself says it is for the private sector.

'The NDC government, under President Mahama, needs to make a difference in this matter as ordinary Ghanaians look for jobs from the lottery sector.

'We call on the Ministry of Finance to ensure proper regulation of the lottery industry by engaging the private sector as well.'

The GLOA asked the National Security Coordinator to investigate the arrests of their members and also appealed to the Chief Justice and the Attorney General to close down the Special Court set up to try people engaged in lotto operations since it was giving the government a bad name.

Ato Conduah, a consultant to GLOA, said an Act of Parliament should not be 'subservient' to another Act, stressing that the NLA was attempting to use Act 722 to freeze Act 844.

Dan Borsor, Acting Chairman of GLOA, urged the members to stay calm as the leadership takes 'every available legal step' to get their concerns addressed.

'We cannot go out there committing all sorts of crimes just to make a living. All we are saying is that the government should intervene and protect private lottery operators so that our teaming members could work to put food on their tables.'