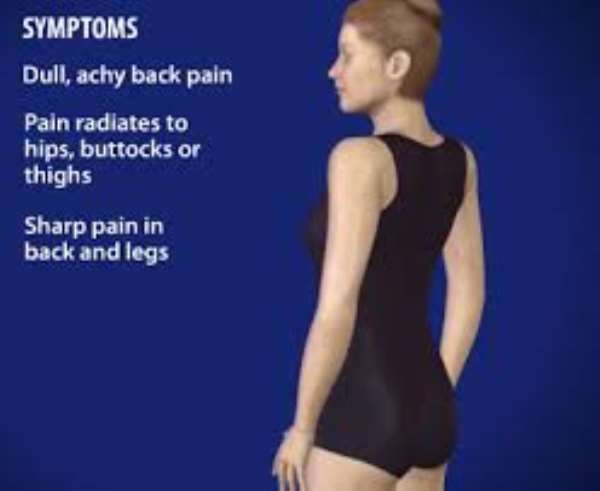 Since t hirty years, Neurosurgeons and Orthopedic Surgeons have shared among them, what used to be called 'Disc-operations.' The disc talked about is 'intervertebral', meaning between vertebral bodies, 'which, together, form the vertebral column' housing the spinal cord and 'nerve-roots'.   In-between, there are other adventurers who may not require a group-name, so to speak, but do operate on disc-prolapses like Neurosurgeons do. The honest ones would acknowledge they see now and again, cases that are presented with low-back-pain of sudden onset, 'Hexen-schuss' as you would come across in German. Other times, the pains would start slowly in the back, increase in intensity, but slowly and with an end-station in both legs, whether in the posterior or lateral aspects. Less frequently, the 'hot zones' are in the anterior aspect of the thighs and legs. It is referred to as 'lumbago' when the pain is limited to the waist. If it affects the waist and simultaneously descends into a leg or both legs, the pattern is then referred to as sciatic-pain. This is due to the anatomy of the nerve roots, as they intermingle, or intertwine from above-below in the 'plexuses', lumbar, lumbo-sacral, and sacral. When examined, the Surgeon might find as the culprit, compression caused by prolapsed or ruptured discs on the nerve roots L4, L5, or S1, but, sometimes a combination thereof, or not only in one leg, but in both.   In extreme cases, defecation and micturition might be absent, leading to an entity designated as 'paraplegia,' implying, the inability to voluntarily move both legs. Our upright posture as 'homo erectus' and our life-style with weight-bearing are largely to blame. In four-legged animals, it was a condition that was only observed 'in trauma', and in the past, with 'bovine Tuberculosis'. Following clinical examination, methods like the 'Myelography' and its variations introduced into medicine by Percival Dandy have meanwhile, been abandoned and replaced by the CAT-Scan, and MRI. These would show a lesion, corresponding to Disc-prolapses, in line with the topography listed above.   Depending on the intensity of pain, or neurological findings, the surgeon would find it wise to resort to his 'super-instruments', and offer the sufferer the 'benefit of the surgical knife.' Fine instrumentations exist these days, and these operations should be, at best, undertaken using them. A prolapsed or ruptured intervertebral disc might be found at operation, but under other circumstances, 'some other material' might be found, which the pathologist might 'displease' the surgeon by saying, 'it is consistent with metastases of Prostatic cancer', or in cases of women, Breast or some genital cancer might have caused it.   The patient is freed from the excruciating pains to begin with. Those with cancerous diseases would have to be subjected to further investigations, and oncological adjuvant therapy. Most patients are freed from their pain, and it is not only the patients who would rejoice, but the Surgeon too.   Then might appear an occasional patient who 'would not stay symptom-free, following the procedure to free him/her.' He or she would show up yet again, with complaints and symptoms that would not fit exactly into a picture that the surgeon might be familiar with.   Going through what should satisfy both parties does not bring the patient and the surgeon any further. Not even the most potent analgesics would be enough to stop the pains.   The surgeon would talk of his patient with 'intransigent course' following a straightforward operation.   Many would agree on what is usually then referred to, as a 'Failed Back syndrome.'   The surgeon goes back to seek 'possible causes', but he doesn't find any.   It is important to mention that with imaging facilities of recent times such as the CAT-Scan and MRI, both since four decades in use, subtle objects like fragments of perforated and sequestered pieces of disc-materials are likely to be detected. Truly, incidents of 'Failed Back Syndrome' are on the decline. Arguments that application of metal rods and screws, since lately, applied in connection with surgery for disc prolapses, frequently in association with spinal surgeries, would sink the incidence of 'Failed back syndrome', is far from being substantiated. What 'may equally hold substance' could be seen as refined surgical instruments, i.e. microsurgical instruments, along with the 'the operating microscope', magnifying the anatomic structures up to twenty times, has the potential of getting the job being done more thoroughly.   The availability of NSAIDS as adjuncts topost-operative support has been of advantage. The invasion of 'Chinese Medicine' into such fields of pain has become another field to study.

[The subject being condensed such that the layman would be on board, hasn't been easy. Please, bear with me].