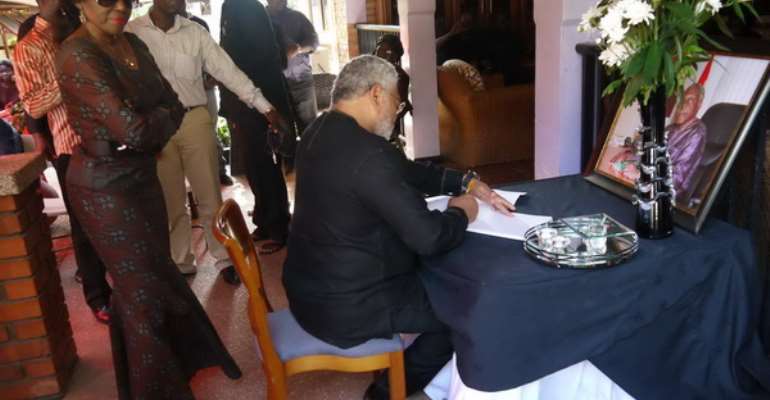 A former President of Ghana, Flt Lt Jerry John Rawlings, has described Professor Kofi Awoonor as a man who spoke against socio-economic injustice and had a good understanding of human frailties and inequalities.

The former President said: 'Professor Awoonor helped lay the foundation of the revolution which saw a period with a sense of purpose and integrity - a period when democracy was at its best.'

He said it was his qualities that struck him when he first met the Professor during a visit to the University of Cape Coast in 1982 to address students on the principles behind the December 31 Revolution.

President Rawlings paid the tribute last Thursday when he and Nana Konadu Agyeman-Rawlings called on the family of the Prof.   Awoonor at his residence in North Legon to express their sympathy to them on the death of the professor, a former Chairman of the  Council of State,  during the attack on the Westgate Mall in Nairobi, Kenya.

Prof. Awoonor's role in the revolution, President Rawlings noted, should be celebrated and not shoved under the carpet by some current leaders of the NDC, who have decided to dissociate themselves from the ideals of the PNDC, which gave birth to the NDC.

The former President wrote in a book of condolence opened in memory of Prof. Awoonor: 'On the onset of the December 31, 1981 revolution, when integrity was very high, you were one of the bold and leading advocates of the PNDC principles and we thank you for it.'

President Rawlings gave particular attention to Afetsi Awoonor, who was with his father on the fateful day, and prayed that he would recover soon. He described terrorism as a global responsibility, adding; 'we owe it to each other to fight it'.

The former President expressed the need to rid the world of inequalities, especially in our part of the world, since Africa's susceptibility to economic disparity could generate animosity among the vulnerable, which then brings hatred of serious proportions that could compel people into violent acts such as terrorism.

Poet, author, academic and diplomat, Prof. Awoonor served in various capacities under President Rawlings, culminating in his appointment as Ghana's Permanent Representative to the United Nations from 1990 to 1994.