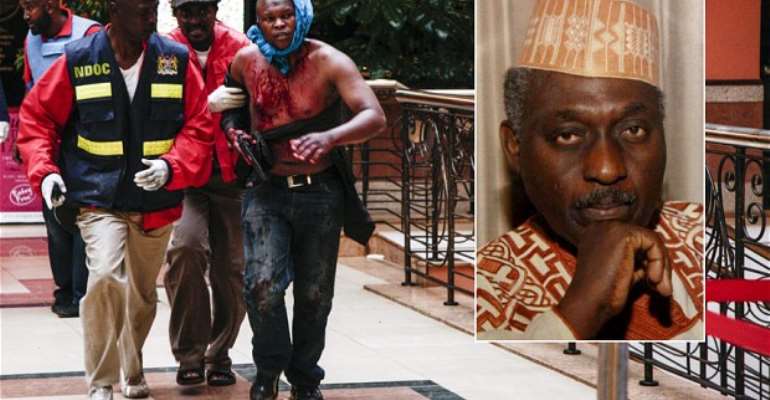 Tributes have been paid to Professor Kofi Awoonor (inset), one of the speakers at Storymoja Hay Festival who has died after sustaining injuries during the attack at Westgate shopping centre

Professor Kofi Awoonor, one of the speakers at Storymoja Hay Festival, has died after sustaining injuries during the attack at Westgate shopping centre.

The Ghanaian government confirmed Awoonor's death early Sunday morning. Awoonor's son had been shot in the shoulder during the attack, for which Somali militant group Al-Shabab has claimed responsibility, and was treated and discharged from hospital late on Saturday. In addition to the 39 people killed, it is estimated 100 have been injured in the attack.

Awoonor was in Nairobi to speak at the Storymoja Hay Festival, a four-day celebration of writing, thinking and storytelling. Along with Ghanaian poets Nii Parkes and Kwame Dawes, he was due to perform on Saturday evening as part of a showcase of award-winning poetry from both sides of Africa.

He said during the festival that the event had 'the best representation of Ghanaian authors that we have ever had' and commended the fellow authors and writers there: 'Together we are discussing the birthing pains of countries.' During a poetry masterclass that Awoonor held at the festival he discussed mortality and said he was unafraid of death. Julie Muriuki, a writer who attended, posted on a blog afterwards: 'I've been looking for my writing voice and Awoonor has shown me where to find it. I'm eternally grateful.'

Awoonor was born in 1935 and became known for his poetry, early collections of which were heavily inspired by the dirge singing and oral poetry of his native Ewe tribe. He published his first collection, Rediscovery and Other Poems, in 1964. Awoonor gained a masters degree in literature at University College London in 1970. His second collection, Night of My Blood, was released in 1971 and was a series of poems that explore Awoonor's roots and the impact of colonialism and foreign rule in Africa.

Awoonor was a diplomat as well as a poet. He served as Ghana's Ambassador to the United Nations between 1990 and 1994, where he was the head of the committee against Apartheid. In 1975 Awoonor was imprisoned without trial for several months. He was later brought to court on charges of helping 'political criminal', ex-Brigadier Kattah, flee the country. Awoonor denied aiding Kattah's escape, but admitted to hosting him. His imprisonment was met with protest from International PEN, Amnesty International and writers including beat poet Allen Ginsberg. His third collection, The House By the Sea, was inspired by his incarceration and was published in 1978.

Tributes to Awoonor have been posted on social media since news of his death broke early on Sunday morning. Dawes, who spoke on Saturday without Awoonor, wrote on Twitter: 'Kofi Awoonor's death is a sad sad moment here in Nairobi. We have lost one of the greatest African poets and diplomats. I've lost my uncle. I woke hoping that the news I got late in the night was false.'

Teju Cole, a Nigerian author who had spoken at this year's festival, was one of the many people who quoted lines from Awoonor's poetry in celebration of his life and work.