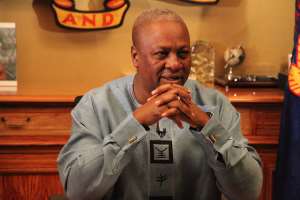 President John Mahama has described as a sad twist of fate Professor Kofi Awoonor's presence at the Nairobi Mall where terrorists killed shoppers, including Ghana's former Chair of the Council of State.

A statement issued by the Ministry of Information yesterday said the President, while transiting in London, en route to New York, said, "I am shocked to hear the death of Prof Awoonor in the Nairobi Mall terrorist attack.'

'Such a sad twist of fate, to place Prof Awoonor at the wrong place at the wrong time. Prof Awoonor was a writer, politician and traditionalist with great wit, sense of humour and very well spoken. He will be sorely missed by family, friends and the NDC, of which he was a committed member,' the President said.

In a related development, the Government of Ghana has expressed regret at the death of Professor Awoonor.

A statement issued in Accra, yesterday said Prof Awoonor died in Nairobi from injuries he sustained during an attack on the Westgate Shopping Mall on Saturday morning, an attack for which the Somali militant group Al-Shabab had claimed responsibility.

The late Prof. Kofi Awoonor
The statement signed by Mr Felix Kwakye Ofosu, a Deputy Minister of Information and Media Relations, said Ghana's High Commission in Kenya had confirmed Prof Awoonor's untimely passing and indicated that his son, Afetsi Awoonor, who also sustained injuries in the attack, survived and was currently responding to treatment.

It said the government had extended its condolence to Prof Awoonor's family and Ghanaians at large for the tragic loss.

Meanwhile, Sonetco Institute, an information, education and development think-tank, has also extended its condolence to the family of the late Prof Awoonor.

'To us, it is a tragedy for the family, Ghana, Kenya and Mother Africa. We use this opportunity to condemn this coward style of expressing anger by the said terrorist group Al-shabab, killing innocent people to drive home a message of hurt,' it said.

A statement issued by the institute said what saddened it most was that the incident happened during the day the whole continent was celebrating and reflecting on the works and dreams of the African of the Millennium, Osagyefo Dr Kwame Nkrumah.

'May the soul of the former Chairman of the Council of State rest in peace,' it said.