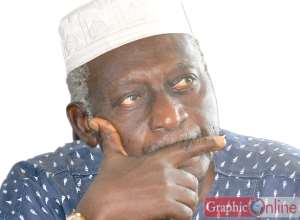 When Professor Kofi Nyidevu Awoonor received invitation to attend this year's Storymoja Hay Festival, a Kenyan literary festival, little did he know that a foot in the Eastern African country's capital would be his last stint with life.

His love for literary works came to the limelight with the publication of his Rediscovery and Other Poems in 1964, and it is this same love that ended a decorated life spent in academia, politics and the literary world.

Interestingly, the Pan-African wordsmith died on Dr Nkrumah's birthday, the Ghana Association of Writers (GAW) Book Festival Day and a day he was expected to speak at the Kenyan literary festival.

The 78-year-old former Chairman of the Council of State was among 69 people confirmed dead by the Kenyan government in the shooting at the Westgate Mall in Nairobi, for which the Somali Islamic extremist group,  Al-Shabab, has claimed responsibility.

His son,  Afetsi  Awoonor,  who was reportedly shot in the shoulder, is among the 175 people injured in one of the most deadly terrorist attacks in Africa in recent memory.

Prof Awoonor was billed to speak at the National Museum of Kenya, alongside two Ghanaians — Nii Ayikwei Parkes, a United Kingdom-based novelist and poet, and the celebrated Ghana-born Caribbean poet and actor, Kwame Senu Neville Dawes — but the event was cancelled in memory of the victims of the attack.

Nii Parkes and Mr Dawes are safe. The two used Twitter to share the pain of their departed colleague.

'Kofi Awoonor's death is a sad moment here in Nairobi. We have lost one of the greatest African poets and diplomats. I've lost my uncle. I woke hoping that the news I got late in the night was false. I saw the news feeds. We have lost Prof Awoonor,' Mr Dawes tweeted.

'Still, Awoonor's departure is a multiple loss — of talent, of African memory (he was a diplomat & friend of literary greats), of legacy...,' tweeted Nii Parkes.

How he died
Unconfirmed reports indicated that Prof Awoonor, who was in the company of his son, had arrived at the mall only to meet the hail of fire.

The gunmen, the source said, had opened fire on the car with a diplomatic number plate. Afetsi had attempted to save his father but he was shot in the shoulder, while his father went down.

Updates
Speaking to the Daily Graphic, Mr George Okoth, the Editor-in-Chief of The Standard, a Kenyan newspaper, said more than 24 hours after the shooting, the assailants remained trapped in the building.

He said the whole area had been cordoned off by the security forces, as attempts to rescue the victims and capture the terrorists continued.

'It is difficult to get exactly what is going on. Information is not coming out because the place has been closed to the public,' he said.

The BBC reported that French, Chinese and Canadian citizens were also among the foreigners confirmed killed, along with a dual Australian-British national.

Tributes
A literary giant in Ghana and across the continent, Prof Awoonor was a founder member of the GAW.

But with death freezing the ink in his pen and soul, his colleagues in the writing fraternity shared memories of him with the Daily Graphic.

Mr Kwasi Gyan-Apenteng—President GAW
'He opened his doors to me every time. For me, the personal is mixed with official because as President of GAW and he as the Chairman of the Council of State, he was so helpful to me. He gave advice publicly and privately,' Mr Gyan-Apenteng fondly remembered.

At the last congress of the GAW in Accra last year, Mr Gyan-Apenteng recalled, Prof Awoonor gave the keynote address and 'gave a brilliant speech, paying glowing tributes to so many writers of his generation… Efua Sutherland, Joe De-Graft, Danny Mortey, all the rest of them… and his last words were 'I hope I will also be remembered like this when I die''.

To Prof Awoonor's family, he said, 'On a day like this, my thoughts are with his family. We always say we feel their pain, but you cannot really feel it as it feels. But we can only give them our condolence and they should know that the whole nation is with them.

'All the writers of Ghana and Africa are with them in prayers because the death of Kofi Awoonor is a national tragedy. The way and manner he died made it an African calamity. The family should take comfort from the fact that the whole continent is mourning with them.'

In a statement released by PAWA its Secretary General, Prof Atukwei Okai, described the death of Prof Awoonor as constituting a 'glittering page rudely torn from the unfinished book of Africa'.

'It is our collective and passionate hope that there will come a time when these brutish and dastardly upheavals in human society will be brought to an end through the enthronement of justice and fairness in the world, and ultimately a reaching out towards an all-healing brotherliness,' it added.

While consoling victims of the attack, the statement said the only consolation in the case of the departed Prof Awoonor was that 'the ideas of his many works will be a continuing source of inspiration to African people'.

It said that Prof Awoonor produced essays which continued to provoke heated debates about the state of the African in the world and recalled his novel, 'This Earth, My brother', which typified one of the dilemmas of the educated African ruling class.

The attack
One gunman has been reportedly killed in the incident in which the attackers, believed to be terrorists, shot and killed at least 59 people and injured more than 170 others when they stormed the busy shopping mall in Nairobi.

The attack is believed to be retribution for Kenyan troops being in Somali where Al-Shabab is fighting for a total Islamic state.

Kenya remains a target for Islamic hardliners because of the high presence of foreign diplomats, as the country hosts the headquarters of the United Nations Environment Programme (UNEP) in Africa.

Kenya, which shares borders with the war-torn Somalia, is a major tourist destination in East Africa.

Fact Sheet
*This is the third time since 1980 that Kenya has been hit by terrorists in planned attacks.

*In 1980, a bomb reduced to a pile of rubble the Norfolk Hotel in Nairobi on New Year's Eve, killing 20 people and injuring 80.

*An Arab group claimed responsibility for that attack, saying it was vengeance for Kenya allowing Israeli troops to refuel in the capital en route to rescue 100 hostages being held by pro-Palestinian hijackers at the Entebbe Airport in Uganda.

*On August 7, 1998, well-co-ordinated simultaneous attacks on the United States Embassy in Nairobi, Kenya and Dar-es-Salaam in Tanzania resulted in the death of 212 people and injury to an estimated 4,000.