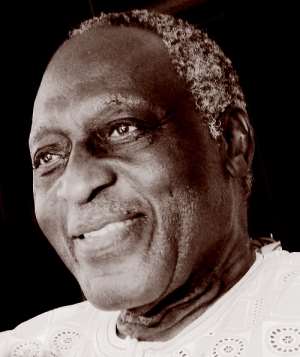 Ghanaians are still in shock following the tragic death of the former Chairman of the Council of State, Professor Kofi Awoonor, which occurred in Nairobi, Kenya, last Saturday.

Mourners and other sympathisers trooped to his North Legon residence in Accra yesterday to express their condolences to the bereaved family.

The mood in the house was sombre at the time the Daily Graphic visited around 12:30 p.m., with family members discussing the funeral arrangements of the late academic guru who was allegedly shot at close range during the shooting at the Westgate Shopping Mall in Nairobi.

A family source told the Daily Graphic that Prof Awoonor was in Nairobi to address a conference this week and had been accompanied to the shopping mall by his son, Afetsi, who also sustained gunshot wounds.

Luckily, Afetsi survived and is currently in hospital.

The professor was said to have left the hotel with his son who drove him to the mall to have breakfast together when the fatal incident occurred.

A family friend, Prof Kofi Anyidoho, who is currently on post-retirement contract as Professor of Literature in the English Department at the University of Ghana, Legon, declined to speak  when the Daily Graphic sought more information on the tragic incident, except to say, 'The family is yet to formally meet to see the way forward but for now we cannot speak to the media.'

He added that the family of the late Prof Awoonor was yet to be briefed on how it all happened, for which reason he appealed to the Daily Graphic to hold on until after the family had met.

Among the dignitaries who were at the residence were Mr Joe Gidisu, the immediate past Minister of Roads and Highways; Mr Dan Abodakpi, Ghana's High Commissioner to Malaysia; Mr Justice Amegashie, the former Chief Executive of the Driver and Vehicle Licensing Authority; Captain Kojo Tsikata (retd) and General Arnold Quainoo (retd).

Prof Awoonor was born to Korsiwor Ashiagbor and Brigas Awoonor, both of blessed memory, at Wheta in the Volta Region on March 13, 1935. His academic journey started at the Roman Catholic Mission School at Dzodze, then the Presbyterian Mission School in Keta, the Zion College of West Africa in Anloga before entering the then Achimota College.

In 1960, he began his public and professional career as a research fellow in African Studies at the University of Ghana.

In 1964, the year he published Rediscovery and Other Poems, the 29-year-old was handed the big responsibility of managing the affairs of the Ghana Film Industry Corporation, a position he held until 1967.

He left Ghana and stayed in exile for seven years. He rejoined academia in 1975 on his return in 1975 and became a senior lecturer at the University of Cape Coast until he was arrested and detained without trial for charges that were later quashed by the courts.

While in the USA, he wrote This Earth, My Brother and My Blood.

Some of his masterpieces are the Rediscovery and Other Poems (1964); Night of My Blood (1971) - poems that explore Awoonor's roots, and the impact of foreign rule in Africa; The House By the Sea (1978); This Earth, My Brother (1971); Comes the Voyager at Last (1992); The Breast of the Earth: A Survey of the History, Culture and Literature of Africa South of the Sahara (1975) and A Political History from Pre-European to Modern Times (1990).

Prof. Awoonor also took his diplomatic work to the United Nations, where he served as Ghana's Permanent Representative from 1990 to 1994.

He later became a Presidential advisor in the Rawlings administration in the late 1990s before the National Democratic Congress (NDC) lost power to the New Patriotic Party (NPP) in 2000.

When the NDC returned to power in 2009, Prof Awoonor became the Chairman of the Council of State. He bowed out after his tenure of office in January this year.