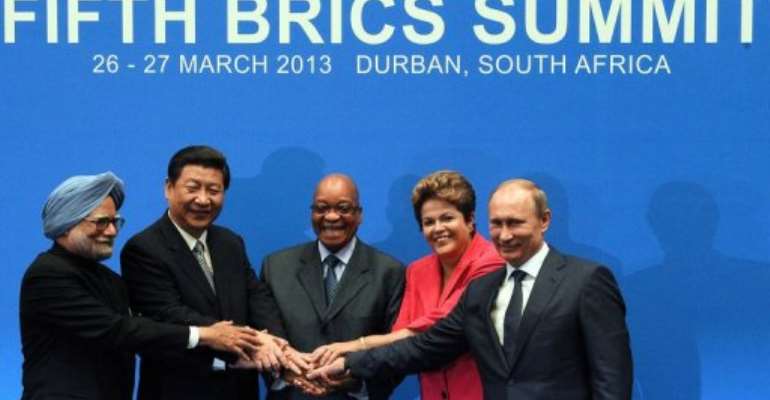 MOSCOW (AFP) - Long hailed as the hungry new tigers of the global economy, the world's biggest emerging markets will be the chief economic focus at the G20 summit in Russia this week as their once surging prospects suddenly dim.

Brazil, Russia, India, China and South Africa -- grouped in the informal BRICS bloc seen as an alternative economic powerhouse -- all go into the meeting experiencing slowing growth and embattled currencies.

While the dispute between Russia and the West over the conflict in Syria is likely to overshadow the summit in Saint Petersburg, splits between emerging markets and US over its winding down of stimulus could prove equally fraught.

"The biggest concern is going to be slow growth. There has been some slowdown in almost all developing countries and we need to discuss sources of long term growth," said Russia's leading official, or sherpa, for the G20 meeting, Ksenia Yudaeva.

There has been deep concern in BRICS economies over the plans by the US Federal Reserve to wind down its programme of quantitative easing (QE) which helped their economies expand fast in the last few years.

The US stimulus freed up money that investors then ploughed into emerging markets. But now risks that this liquidity may recede is triggering major outflows and sharply depreciating BRICS currencies.

The Federal Reserve's potential winding down of monetary easing "is one of the worries for some countries," Yudaeva said.

Most countries may have welcomed the stimulus policy when it was first introduced by the US central bank but now there is far less harmony about how it should be scaled down.

Chris Weafer, co-founder of Moscow-based consultancy Macro Advisory, said there is now an obvious division between the emerging markets and the European Central Bank and Fed about how the reduction of US stimulus can be handled without causing undue damage.

"The leaders in the emerging markets will be demanding that the Fed unwind its QE programme taking into account the collateral damage... as much as its US domestic interest," he said.

He added: "Syria is a very divisive issue but the whole QE programme is probably even more divisive."

With US-led military action against Syria expected any day, emerging markets may also be hit by a traditional flight to safety by investors during a period of international strife.

President Vladimir Putin will be hoping to show off Russia as a dynamic and investment friendly economy at the summit hosted at a seaside imperial palace outside his home city of Saint Petersburg.

But while Russia can still boast one of the lowest public debts of a major economy, its sluggish growth rates have again exposed Putin's failure to attract investment, reduce its dependence on energy exports and stem an alarming capital flight.

Growth in Russia was just 1.2 percent in the second quarter and some analysts have warned the country may already be in a technical recession. The government last week reduced its full-year growth forecast to 1.8 percent from 2.4 percent.

But the immediate problems are even more acute in India, where the rupee has lost about a fifth of its value against the dollar since the start of 2013.

The economy meanwhile is suffering decade-low growth and GDP rose just 4.4 percent in the first financial quarter, the weakest performance since 2009.

Brazil, which was rocked by protests over the high cost of living earlier this year ahead of its hosting of the 2014 World Cup, has seen its currency fall to its lowest levels against the dollar since December 2008.

China's growth rates meanwhile are still stellar compared with Western economies but have significantly dropped off. The economy grew 7.5 percent year-on-year in April-June, slowing from the first quarter's 7.7 percent.

The concerns about emerging markets are a far cry from a year ago when global economic anxiety was focused on the woes of the eurozone which now appears to be beginning to steady its ship.

"The positive development since last year is the stabilisation of the situation in the eurozone," Yudaeva told reporters. "The eurozone seems to be getting out of recession albeit at different speeds."

There should be far less dispute on another key economic issue at the G20: a proposal by the Organisation for Economic Cooperation and Development for new rules to crack down on tax avoidance by big companies and thus help the budgets of cash-strapped governments.

The leaders are expected to approve the proposals, although there may still be a need for further discussions at the summit on the details, Yudaeva said.