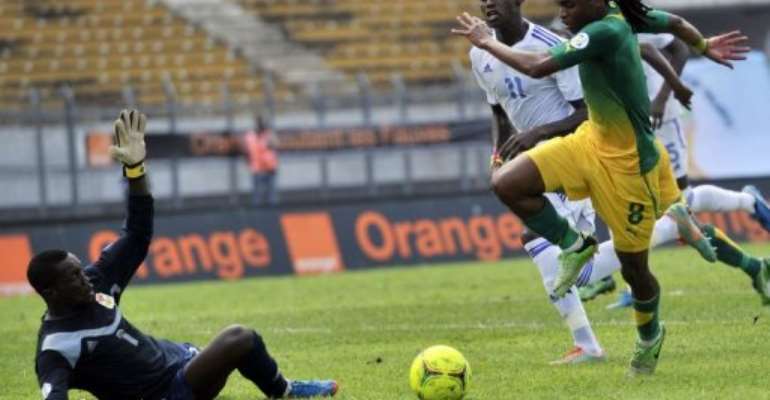 Siphiwe Tshabalala (right) on the ball against Central African Republic in Yaounde on June 8, 2013. By Issouf Sanogo (AFP/File)

Although fielding a number of first choices, three-time World Cup qualifiers Bafana Bafana (The Boys) only sealed victory over a Stallions 'C' team with a stoppage-time goal.

The friendly football international did not fall during the FIFA calendar so Burkina Faso were unable to call up any overseas-based stars like Jonathan Pitroipa from French club Rennes.

Siphiwe Tshabalala put South Africa ahead midway through the first half and after rattling the woodwork twice, the home side added a second goal through substitute Luyolo Nomandela.

Reneilwe Letsholonyane struck the post and Marc van Heerden the crossbar before Nomandela tapped a goal-bound Lerato Chabangu shot over the line.

South Africa host Botswana and Burkina Faso are at home to Gabon during September in must-win World Cup qualifiers to have any chance of making African zone play-offs.

The inaugural Sport Day is a government brainchild to honour Mandela, 95, who has been in a Pretoria hospital for more than two months with a recurring lung infection.

South Africa won the Rugby World Cup at the first attempt in 1995 and Mandela attended the final at Ellis Park in Johannesburg wearing a replica shirt of skipper Francois Pienaar.

A year later Mandela was at Soccer City to see Bafana Bafana lift the Africa Cup of Nations -- the only time they have won the biennial competition.

The Sport Day kicked off with a team of former Italian stars defeating their South African counterparts 2-0 and the Springboks face Argentina later in the Rugby Championship.