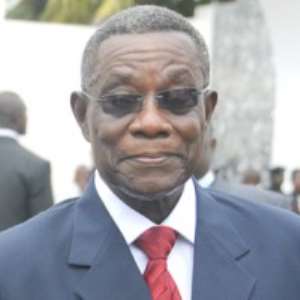 You do not have to look very hard at the Ghanaian political environment to observe that all Ghanaians, especially the poor for a very long time to come, will miss the late Prof John Evans Atta Mills.

Because it does not appear that, any of the political parties are interested in giving Ghana another Atta Mills, not even 'Atta Mills political culture.'

Instead, Ghana is presented with political opportunists who are doing a terrible job trying to creatively choreograph the lifestyle of Atta Mills in their bid to procure the legitimacy of the observing masses.

The painful truth however is that everything truly Atta Mills was buried with him at the Asomdwe Park. Oh, yes! Ghanaians came back from the graveyard with only the tears. Even that, some people do not think we have had enough.

Hence, the tedious efforts by the one-year anniversary planning committee to set the stage for more tears for Atta Mills. A truly national, none partisan wailing. I have seen people rehearsing for it. Those who have not cried in a long while intend to make an exception for' Agya Atta. ' They intend to cry their hearts out.

But of what honour do we do the memory of one of Africa's foremost intellectual and leader when we bury him with his timeless virtues and exhibit him to the world as one who left his country nothing but tears? That must never be.

H.E Professor John Evans Atta Mills left Ghana a legacy of peace, love and unity worth brandishing to the rest of the world. It's nobler than the tears. He was a man who lived and preached these virtues. He showed love to all, including his political opponents, a decision he paid dearly for. Aside the fact that he believed that despite our religious, ethnic and political differences Ghanaians are one people who need to coexist, it was his unflinching belief that a house divided against its self cannot stand, that, true development in any facet of our country was only realistic in an atmosphere of peace. Many thought his death was a price for peace. I still do.

Atta Mills also left a legacy of great humility and respect for everybody, especially children and the underprivileged. These are also worth showcasing to the world; that a Ghanaian leader once taught his people by example to be humble. He never lorded his presidency or his rare academic excellence on anybody.

He gave a human face to the presidency and demystified all the mysteries that surrounded that office. The long convoys, long associated with presidential travels went away, the scary looking soldiers trained to terrorize fellow citizens were not following him, he was not kept in isolation from the citizenry; he freely associated with everybody openly. Since his death, we have been inundated with testimonies of the many ordinary people he visited, phoned or ate with. He referred to everyone as 'my brother or sister' as his or her gender may require.


Atta Mills was also a man of great personal integrity. So impeccable was his reputation that even his political opponents found it worthy to christen him as incorruptible.

He made the fight against corruption a national priority. Anti graft agencies such as the EOCO, the NACOB, the police CID, etc were not only given enhanced powers, they were adequately retooled and their mandates appropriately aligned to achieve results. He went to the extent of procuring the services of a private investigator to secretly investigate corruption at Ghana's port and the ECG, especially bring to light the extent of officials involvement, whether from the security agencies or staffs of the corporations being investigated.

What is more, regardless of the potential embarrassment to his government, the reports and videos were made public. Immediate action was instituted against those who were found culpable.

Atta Mills fought fiercely against public sector corruption by reorganising and simplifying the hitherto bureaucratic process of registering a company and paying taxes, by integrating the various revenue collection agencies and the Registrar General's department.

The world must see Ghana as a country that does not entertain corruption. Can there be a better way of honouring Atta Mills other than such?

The late President had clarity on what a developing country like Ghana required to create long term and sustainable wealth and to lift the majority of its population consigned to poverty from it.

First, he set out to strengthen state institutions. The security services, the national fire service, the ministries departments and agencies of state became attractive again. For once, we saw them as national assets that worked for everybody's interest.

Secondly, the massive nationwide infrastructure development, which he undertook, especially in resourcing the educational sector, the health sector, building roads to link every part of the country especially the production sectors, with positive interventions in the agric sector, which led to increase yield in Ghana's cocoa industry and improvement in the national buffer stock.

Thirdly was his focus on the youth. His focus on education, and its attending social interventions, did enough to empower the youth. However, it was his running of a government with over 80% of his staff as youth, some of which barely out of school, which demonstrated his sincerest commitment on developing the country on a long-term basis.

The only way to measure the wisdom in that decision is to compare the achievement of that era with those that preceded it.

It takes a truly clever team to be able to stabilize the economy of a developing country at a time of global recession. The economy under the management of Atta Mills saw a stabilized currency, 8.6% inflationary rate, gross international reserves of $4.98bn and a GDP growth rate of 13.6 %. This meant that the private sector could plan their business efficiently and not to lose their profits to inflation. That was not all, he created a strong private sector.

Under his leadership, Ghana was adjudged the best place for doing business in West Africa, best performer in access to credit and Ghana moved up 10 places from 77 to 67 out of 183 countries studied in business friendly countries. This is according to the World Bank 2011 doing business report.

To what extent is Ghana building on these achievements?

As we remember one year since Professor Mill's death it is only fair to ask ourselves as a nation what has become of this timeless and priceless virtues and achievements just one year down the line.

The Peace, love and unity were all buried at the Asomdwe Park. Political insults and acrimony is at its peak. The Supreme Court has already jailed two people for their irresponsible public commentary. The current political tension in the country is not only unacceptable but gives as a reason miss Prof. John Evans Atta Mills.

Instead of working to produce for the development of the country, the over 22 million Ghanaians have become spectators watching the supreme court of Ghana resolve a quarrel between the ruling political party and the main opposition party over who won an elections seven months ago. Indeed whilst we are enjoying the unfolding drama at the court and lawyers demonstrate 'who is who' in Ghana law, investors have pocketed their funds and are standing akimbo watching the drama, which has an entire nation as cast. They seem to be having fun too. Woow!!!!!

Whilst at it, Ghana's poor continue to die in the hospital over preventable diseases, many graduating junior level students cannot enter the universities for lack of space, the unstable power situation is collapsing industry. Graduates of Ghana continue to walk aimlessly without job. Criminals are having a field day burning the markets of our mothers. Child prostitution, arm robbery, galamsey and fraud are appearing more and more attractive. Recent media reports that the government communication team is on strike for undisclosed grievance demonstrates the extent of hopelessness. There is little doubt that the economy is struggling.

We miss so much the humility of Atta Mills as holders of political power and their counterparts in opposition demonstrate the show of force, arrogance and obscene opulence.

It is tragic that despite all that Mills did to fight against the Drug trade, there can be an arrest of a drug lord in the USA allegedly associated with the governing party. Truly tragic.

As we remember the one year since the death of Atta Mills, the best way is not who can cry loudest as we see the state preparing us for such a contest. Neither is it a contest of who was closest to Atta Mills whilst he lived. In fact, it is not even about breaking our eardrums with talks of how much of a good leader Mills was.

It is about having another Atta Mills in our politics. It is creating the culture of Atta Mills in our politics, where we see the practical manifestation of all the wonderful virtues and achievements, which endeared the good Prof to us. After all, what sense does it make to despise what the man stood for and still cry that you have missed him? The bible puts it better. 'If you love me, keep my commandments.'

Is it too late to return to the politics of peace, love, unity, anti corruption, humility, development for all; not a few with party cards or who hail from the tribe of the holders of power? I do not think so.

Atta Mills was a patriot. But above all, he embodies the truest sense of being a sincere politician and achieve so much for your people. May his humble soul rest in peace.