The Kayaye And Manasseh Azure, what Is The Difference? 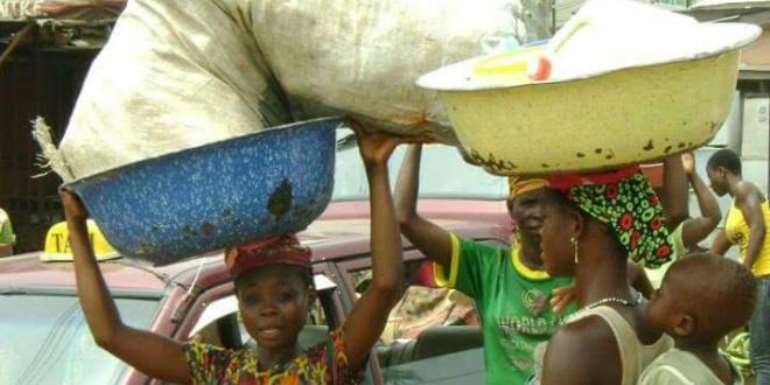 Like most Ghanaians, I made my Christmas shopping relatively early, on the afternoon of December 21. I went to Makola in Accra. I had parked my car at the supreme Court car park, quite a distance from the shopping area, to avoid the terrible telling traffic in the city after shopping.

Unfortunately, I could not carry the goods to my car without help, for they were heavier than I could bear. Well, so I thought. Perhaps, I was simply shy to carry those goods publicly in my well suited suit.

The shop owner even without my prompting, had arranged for one poorly dressed, beautiful, dark skinned Northern teenage lady to carry the goods. She was a kayaye. I felt guilty immediately. For it was as if I was encouraging 21st century slavery.

I had never ever anticipated a day like this will ever show up, when I will engage the services of a so called kayaye. Even worse, that a little girl, whose age is about a third of mine, to carry goods I cannot carry for as little as Ghc 3. What a shame!

Why should she bear a burden I am embarrassed to bear publicly? Am I a better human being than her?

In fact, reports abound about how most guys had their first sexual experience by violating their domestic helps. In most instances, parents encourage it, not that it should lead to marriage but rather, to encourage anything which makes their own children happy.

We are aware some house helps go without food for days, even when they prepare the food. Some are manhandled, physically abused and become alternatives in bed, when their mistresses starve their husbands of sex.

All around us, we see them. Those pounding fufu, those serving as watchmen, those who sweep the streets, those who drive the ‘bigmen’, etc.

Why is it alright for another human being to slave for another in their own homes when they have abled children with equal or better ability to do it?

What is the difference in their human quality and those they slave for? What is it? Do they have less IQ, less beauty , less gifts, and are they substandard human beings?

The answer is simple. Education! Or the lack of it.

It is what makes Atongo pound fufu in the eatery and Manasseh Azure an astute journalist, even though they both come from the same part of Ghana and from a humble background.

Education is what made John Dramani Mahama, President of the Republic of Ghana at a relatively youthful age and continue to make Manasseh Azure’s father a night watchman even at retirement age.

Education is the key that unlocks the human in you, without it, even if others want to treat you like a human being, you will reject it.

Education is what made the difference in my life.
Starting life as a street hawker in mile 7,New Achimota, living with my siblings and my mother in uncompleted buildings and watching my mother carry concrete and cement as labourer to make ends meet, it was education that changed the narrative.

Having waited for nine years to finally get the opportunity to step in primary one for the first time in New Achimota Presby, it was this key which made me the school prefect in primary school, JSS, and SSS. Education made me the President of Commonwealth Hall JCR of the University of Ghana, Executive Committee member of the SRC , USAG and NUGS.

Imagine if there was no decision to take me to school even at age nine. Just imagine, for a second. Having started as bread hawker, perhaps, I would have ended up carrying Manasseh’s Christmas shopping. Or become a village champion, impregnating several ladies.

Recently, the very beautiful daughter of Barbara Serwaah Asamoah, former deputy minister for Lands and Natural Resources, got married. According to the mother, she got pregnant when she was barely a teenager. It was very difficult. Having gotten pregnant as a street hawker to a man she never ever met again, it was her resolve to pursue education even with her baby strapped at her back. Today she is a lawyer, former minister of state and a proud farmer.

Nobody was born useless. The blind, the cripple, and people with defects, even when they gain education, they rule their world.

Dr Danaa remains very blind, yet, with Education, has risen to the high office of a minister and is a distinguished lawyer in Ghana.

Dr Otabil was right. Our problems are wisdom problems

Africa is suffering because we have turned our greatest assets, the youth, into burdens and liabilities, by refusing to make them productive with education. So, like the isosceles triangle, we have stood our productivity on its head, with the few educated supporting the bulk of uneducated people in our homes, and society at large. As a result our nation is underdeveloped, poor and indebted.

Education is really the secret of the developed nations. Where more hands are trained, more revenue is accrued. But more than that research has shown that the educated person is healthier, decent, not a threat to society and contribute to income generation. It is not so with the uneducated.

Huge percentages of national resources end up just addressing challenges from unhealthy lifestyles, fighting armed robbery, teenage pregnancy, and social vices arising as a result of the life styles of the poor, who are mostly unlettered.

I conclude that the solution to building a successful life, family, church, organization and country lies in Education! Education!! Education!!! Educate yourself and you will succeed. Similarly build your family or organization with educated people and it will flourish.

It is the most effective way to abolish 21st century slavery perpetuated by all including our religious institutions, government and the constitution, which trumpets freedom and Justice on the rooftops and practice otherwise.