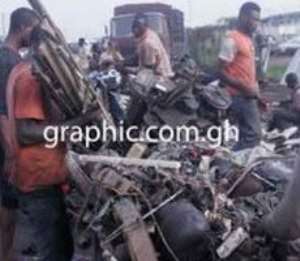 Scrap dealers in the Ashanti Region have warned the ban on scrap exportation could heighten crime in the country, if is not reviewed.

The Ministry of Trade and Industry is enforcing an administrative ban on ferrous scrap exportation to save the local steel industry from collapse.

Disgruntled dealers allege local steel companies are taking advantage of the situation to cheat them.

They say average price of shredded steel has dropped from Gh₵620 to Gh₵400, a situation they claim is affecting incomes of dealers.

Abdul Latif Adam, Spokesperson for the Ashanti Region branch of the Scrap Dealers Association, says the local firms have rejected large quantities of metal on grounds they lack melting capacity.

He argues the waste materials could be utilized when sold on the foreign market.

He tells Luv News the development has the potential to push jobless dealers into crime.

“The Minister rushed to consider just the plight of the steel companies at the expense of the plight of these poor petty scrap dealers but the Minister should know that Nigeria began such a thing and it ended up in the formation of the Boko Haram”, angry Lafif Adam stated.

He says if nothing is done about the situation, crime rate would rise in Kumasi and other parts of the country.

Ghana Would Be Cursed Should We Vote Against Akufo-Addo — La...
1 hour ago