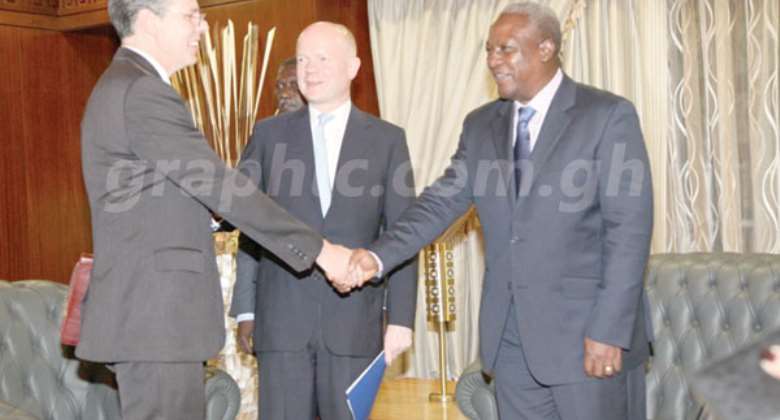 Late President Mills made his first official visit to the UK as President-elect IN 2009. I made some observations privately offered some suggestions which later I later put out for publication.

In other parts of the world, countries actually lobby other nations for humane visa conditions for their nationals. ( see this New York Times story http://www.nytimes.com/2013/05/12/us/politics/tucked-in-immigration-bill-special-deals-for-some.html?pagewanted=all&_r=0)

In the wake of new proposals by Britain to bond nationals from countries such as Ghana, the recommendations in my article couldn't have been more apt.

Britain could only take make such immigration proposals if nations like Ghana forcefully made a case for less-stricter visa conditions.

Please find below the full article as published in 2009 on www.myjoyonline.com

When the blinds are drawn and the doors locked, away from the eyes of a news hungry press corpse, the leaders of Ghana and Britain, Messrs Atta Mills and Gordon Brown would be in deep thought about what each leader expects of the other.

For Ghana, it is quite straight forward. Our country and the UK have a long and enduring relationship. From the bitter days of colonial injustice through to the 21st century, we have looked to the UK as a model for our development, and many of our national figures including Philip Quarcoo, Kwame Nkrumah, Professor Atta Mills, Tsatsu Tsikata and John Kufuor have all been trained in Britain.

Most interestingly, Ghanaians have contributed immensely to the resource base of the UK. Our own Philip Quarcoo became the first African to be ordained priest in the Church of England in 1769. We also gave the UK its first Black cabinet minister, the Right Honorable Paul Boateng.

There's another larger than life personality who has not come to the notice of many Ghanaians - Sir Bernard Ribiero. He was the President of the Royal College of Surgeons from 2005 to 2008. Sir Ribiero was the topmost scientist in the UK and a son of Ghana. He is the only person in the world to win the most coveted Witch Doctor Red Apple Award.

Ghana has paid her dues and it is for this reason that our president must make a special appeal to the UK government on behalf of Ghanaians. Britain and Ghana go way back and special efforts must be made by both countries to continue on the part of cooperation. If there's any country in the commonwealth whose nationals must be permitted to the UK without any of those funny immigration laws and flimsy reasons for visa refusals, it is Ghana.

As per the new visa requirements, it is most difficult for genuine applicants including potential Paul Boatengs and Bernard Ribbieros of tomorrow to come here to work or study. And the UK labour government is behaving unlike a labour government. Quality education must not be the preserve of the rich or those who can deceive clearance officers into believing they have fat bank accounts. The system as it stands now is so unrealistic.

Ghana still has a lot to learn from Britain's experience in the areas of security and oil exploration. We can profit from the mistakes of our colonial masters. And one of Mrs. Thatcher's mistakes was allowing what a senior colleague of mine called 'farcical free enterprise'.

Ghana must therefore go into these talks with the UK government with the view to getting technical support, access cheaper military hardware from Britain and a request for a new set of rules for Ghanaian nationals intending to come here to study. We cannot afford to pass up that opportunity.

Britain is one f the world's topmost providers of military hardware and we in Ghana must seek to benefit from that. Our country is currently under the threat of ruthless drugs barons and our navy needs all the help it can get to police our waters and keep our shores safer from barons, pirates and invaders into our territorial waters. Britain can provide us frontline equipment such as transport aircraft and communications system.

On the part of Britain, they are most likely to seek our support in African security, opening up our market for British manufactures and businesses, drugs trade and the world economic crises. Britain might ask us to provide a leading role in tackling the issues of drugs coming from West Africa; provide support for conflict prevention and peace keeping efforts within the continent and help curb the so called 'tax havens'.

It is in our best interest to offer cooperation in all of these areas. I am not certain what Ghana can offer in terms of helping soften the impact of the global recession. This is something I would reserve for the economies to sort out.

Financially, we should not expect new pledges and monies in the bag and I would be surprised if we placed financial assistance on the top of our agenda.

Britain is perhaps is in dire need of financial help than us. According to the European Commission, the UK economy is 'set to shrink by 3.8 per cent this year'. The European Commission adds that unemployment in the UK would 'continue to rise, jumping from 8.2 per cent this year and increasing further by 9.4 in 2010'. And this comes in the heels of another gloomy forecast by a top UK economist Dr. Andrew Goudie- who said recently at the Holly rood's economic committee that he saw 'no sign of recovery'.

Presently official figures show more than 2million people without jobs in the UK, the highest since 1997. A recent Daily Telegraph report quotes the Institute of Fiscal Studies as saying that 'Britain's debt will not be under control until 2032' and predicted to surpass 2trillion pounds sterling.

We must be decisive in preventing domestic inequalities — Dr...
31 minutes ago