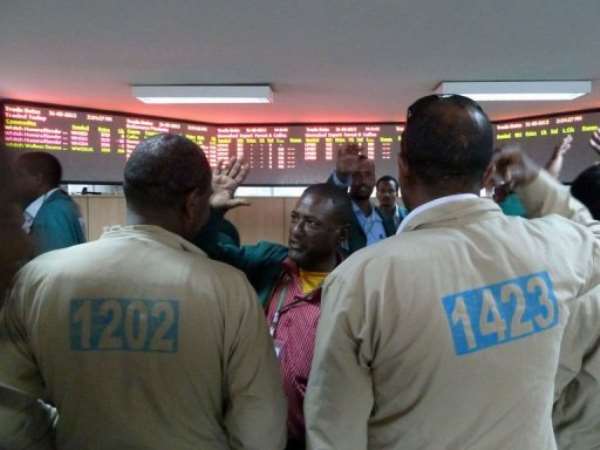 ADDIS ABABA (AFP) - A bell rings and the floor of Ethiopia's Commodities Exchange is flooded with traders dressed in coloured coats, waving hands and shouting bids for coffee, sesame seeds or haricot beans.

Following a feverish shouting match, prices are agreed upon and the deal is sealed with a high five between buyer and seller.

Established in 2008, the ground-breaking ECX has boosted exports in Ethiopia, improved conditions for producers and is now inspiring other countries in resource-rich Africa to set up their own exchanges to ensure they are the main beneficiaries of commodity exports.

It has allowed "price discovery" for farmers, ECX chief executive officer Anteneh Assefa said, explaining that previously producers had little knowledge of international market prices and could only rely on middlemen who pocketed hefty profits by selling on heavily marked up goods.

"Most African countries have their economies based on agriculture, so in my opinion, they need to have commodity exchanges to make price discovery (available to producers)," ECX chief executive officer Anteneh Assefa told AFP.

"Some African countries have visited the Ethiopian commodities exchange and some are trying to emulate this model," he added.

Visitors have included the presidents of Nigeria and Tanzania, as well as delegations from Mozambique and Sudan.

It has 329 registered members -- which includes traders and producers -- who work with some 12,000 people nation-wide, from farmers to warehouse managers.

It is a key organisation in Ethiopia, where agriculture accounts for 40 percent of GDP and the bulk of the country's exports, with more than $1.1 billion worth of goods traded on the exchange last year, according to official figures.

The ECX -- which is government owned, but self-funding with donations from external sources -- has helped to boost the quality of products too, Anteneh said.

"The country is now producing more and exporting more," Anteneh said, speaking from his office overlooking the streets of Addis Ababa, where cafes are crammed with avid coffee drinkers at any given hour of the day.

While not all coffee, beans and sesame produced are traded on the ECX -- they are also sold through farming cooperatives or at auction houses -- about 90 percent of these three items move through the commodities exchange.

"The livelihoods of the farmers and the producers have changed for the better," Anteneh said, before ringing the ECX bell to open trading for the day, adding that farmers were encouraged by greater profits to both produce more and raise the quality of production.

Previously, around a third of the price of goods sold went to the farmer, but those who sell through ECX take as much of 80 percent of the sale price home.

The impact extends to the buyers as well.

Like the producers, they are better informed about activity on world markets through the ECX, and since the exchange has introduced rigid quality controls, it is working to ensure the product can be trusted.

According to Akalu Woube, head buyer at Ethiopia's Tomoca Coffee, better varieties are available at a lower cost due to competitive selling and, conveniently, can be sourced in one place.

"We get a variety of coffees, different tastes...so we can get whatever amount we need," he told AFP, standing in his bustling cafe established 60 years ago, Addis Ababa's oldest.

"You don't spend time searching for coffee from here and there, in one centre we can have everything," he added.

Tomoca mainly purchases coffee for local consumption -- about half of all coffee traded at the ECX stays inside Ethiopia -- but Akalu said the company plans to boost exports to Europe and other African countries.

"The experiences made from ECX could be useful when Ethiopia is ready to introduce a stock exchange, which could expand investment opportunities and help raise savings," said Jan Mikkelsen, head of the International Monetary Fund in Ethiopia.

"This is a major impediment for the expansion," said Anteneh.

But Anteneh said ECX plans to outsource warehouse management -- allowing for the introduction of more commodities such as chickpeas and wheat -- as well as an online trading system so that trades can be also be made on the Internet.

Coffee exporter Gebre Mezgebe said the exchange has meant he is now paid on time, since under the previous system of auctions payment was often delayed, or even never came through.

"When we sell today, you can get your money tomorrow... this is the main problem solved by ECX," he said.

However, remote selling has also raised the risk of delayed deliveries and spotty quality, Gebre added.

But despite the glitches, Anteneh said he wants ECX to grow further, and looks forward to a time when countries across Africa are connected through national and regional commodities exchanges, boosting economic growth.

"This is my wish, to see the major commodities that Africa produces quoted in an African exchange," he said.