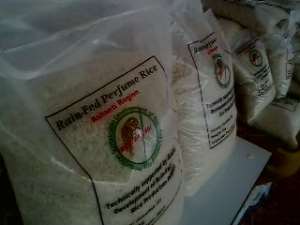 A technology to expand rice cultivation in Ghana is to be extended to cover more communities and farmers across the country.

The technique helps increase yield and improve quality for the promotion of local rice production and consumption.

“Now we're reaching about 1,834 farmers; apart from that there are farmers who only just visit our trial plots to see what we're doing and carry out to do [it] on their farm”, said Project Schedule Officer, Samuel Kofi Tekpor.

There is an upsurge in rice consumption in urban Ghana, but import of the cereal constitutes 6—70 percent of supply, due to low domestic rice production.

The rice cultivation technology is being implemented at established trial fields in four districts in Ashanti and three districts in the Northern region – the average yield of trial plots is between 3.3 and 4.9 tons per hectare from the previous 1-2t/ha, according to project managers.

Mr. Tekpor is confident the targeted regions would be able to reach rice sufficient levels before the project ends in 2014.

“By the end of this year, we should be able to achieve that target of rice production sufficiency at least for the regions before we look at the national level because apart from our project, there are other rice activities that are going on and they are also achieving their targets. Put together we hope we can reach there”, he expressed.

Raphael Serkpor, Farm Management and Farmer Support System specialist with MoFA, says the project is also creating linkages in the rice packaging and marketing to millers and other private enterprises.

Meanwhile, district directors of agriculture are being exposed to the rice production technique and extension plan for adoption in their localities for an upscale in domestic rice production.