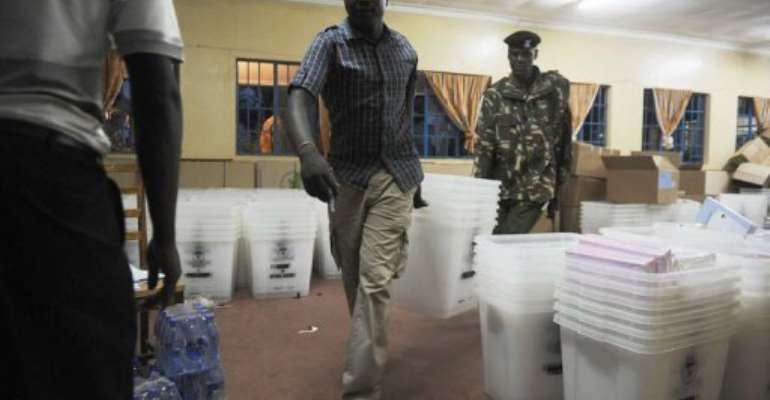 Officials from the Independent Electoral and Boundaries Commission distibute ballot boxes on March 3, 2013 in Kakamega. By Tony Karumba (AFP)

NAIROBI (AFP) - Long lines of Kenyans queued from far before dawn as polls opened Monday for hard-fought elections, hours after several policemen were killed in an ambush in the port city of Mombasa.

The elections are the first since bloody post-poll violence five years ago in which over 1,100 people were killed, and observers have repeatedly warned of the risk of renewed conflict.

However, voters standing in line several hundreds of metres (yards) long -- and several people thick -- crowded peacefully outside polling stations including in the capital Nairobi, the port city of Mombasa and the western town of Kisumu.

People started lining up outside polling stations from as early as 4:00am to cast their vote in the historic election, with polls officially opening at 6:00am (0300GMT), although there were short delays reported in some areas.

Voters packed side streets as they queued in long lines in Mombasa, despite the gun attacks hours earlier blamed on a coastal separatist movement in which several police officers had been killed.

Kenyan police chief David Kimaiyo said there had been "casualties from both sides" when an armed gang ambushed police officers in Kenya's second city.

"There was a clash between people we suspect are MRC attackers," Kimaiyo said, referring to the Mombasa Republican Council (MRC), a group seeking the secession of the popular tourist coastal region.

Police sources said at least five officers had been killed, but officials could not immediately confirm the toll.

In Nairobi's shanty town Kibera, scene of some of the worst ethnic clashes during the heavily disputed 2007 elections, thousands waited to vote.

"I got here at 3:45am, I came so early as I wanted to avoid the long queues," said Denis Kaene, 34 years, an unemployed resident of Kibera.

"It's a very good day, because we are looking for a change. It will be a very calm day, I want peaceful elections."

"We have been waiting for this moment for five years. It is time for new leaders," said 38-year old high school teacher Timothy Njogu outside the Ngara polling station in Nairobi's Starehe constituency.

Akufo-Addo, Ken Take Ghana Back To HIPC – Mahama
39 minutes ago