The NDC and Vote Thievery - Collaboration With Afari Gyan/EC 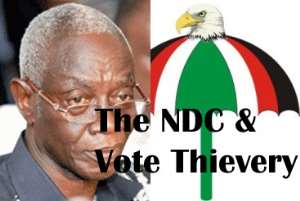 It is better to be isolated for standing for what is right than to coerced and cowered into submission to accept a fraudulent decision. The response of the Obama administration as well as media reports makes clear that John Mahama and his National Democratic Congress (NDC) should be accepted as the legitimate victor in the recent Ghanaian elections, despite widespread vote-rigging. Such advances are undemocratic, unpatriotic and unaccepted.

Would the people of America accepted such fraudulent elections without a voice been raised? I don't think so. Then why are they asking Ghanaians who feel manipulated to accept a forced verdict.

What is irritating is the continuing citing of Obama as an authority for all to obey. To some of us he is no authority because of his association with same-sex marriage. What moral attributes has he to tell someone to accept. No sane person will encourage same-sex marriage.

To the developed countries when it suits their interest they respond favorably. It is such intrusion that some countries are suspicious of the West.

When it suits them the United States and other western powers have raised their concerns about the legitimacy of an election in a developing country. In Ghana, however, despite widespread reports of figure massaging, the refusal to apply the No Verification No Vote (NVNV) as agreed by all political parties seems to be non-existing barely a murmur can be heard.

It will be in the interest of the United States and their allies to demand credible elections from their surrogates to prevent such Constitutional disorders as taking place in Ghana. It is a shame on their democratic credentials to lend support for “Rigged Elections”. They should rather congratulate the Opposition Party for engaging the use of due process to seek redress and calling on their support not to subvert the peace of the country.

What is hurting is the complete silence within the educated. This forgiving approach to the ruling Ghanaian elite comes despite the obvious lack of progress towards even a semblance of democratic rule and the refusal of the Clergy to speak against the 'Evil' been perpetrated on the is worrying and is an absolute indictment on their credibility. Or they have subdued by the threats of the NDC. The Clergy both Christians and Moslems has a duty to speak against evil and their voices must be heard.

In Ghana darkness continues to rule. The Bible is right when it states, 'for lack of knowledge my people perish'. The country sits on throes of pain as its heart bleeds for truth and for genuine leadership. Most of its elders are blind with correction. Like the whirlwind that swept Israel during Priesthood of Eli, such is the whirlwind that will engulf Ghana. The only salvation for our collective peace is to stand up against evil. Eli's children corrupted what was sacred by refusing to rebuke the erring sons and the whole of Israel paid dearly for it.

The Peace Council has compromised its neutrality and has lost credibility, and it will be very difficult to prevail over the Opposition to accept its decisions. The Peace Council must know that it is their responsibility to have a fair dealing with all persons.

They do not deserve to be regarded as voice of the People. Worse all is the failure of the Peace Council to voice their disapproval on the development, forgetting that there can be no peace if people feel cheated or slighted.

Change does not roll in on the wheels of inevitability, but comes through continuous struggle. And so we must straighten our backs and work for our freedom. A man can't ride you unless your back is bent, Martin Luther King, Jr.

It should be our continuous struggle to redeem our people from the shackles of oppressor rule. Most of our fear to litigate for litigation has been construed to be evil and unaccepted phenomena in the society. Any people who stands up to it are branded by opponent as wanting create to tension. A situation the manipulators use to win over the not discerning. A man who won't die something is not fit to live. For some of us that had been our resolve. To some of us, to pursue truth at the expense our very lives is worth working for. Those who hate truth, hate those stands for truth.

What we must all understand is that, a true leader does not search for consensus but shapes consensus and this I find in Nana Addo Dankwa Akufo Addo. You may hate the man Akufo Addo but love him for his courage even in his adversity.

To end it all I say, always continue the climb. It is possible for you to do whatever you choose, if you first get to know who you are and are willing to work with a power that is greater than ourselves to do it.