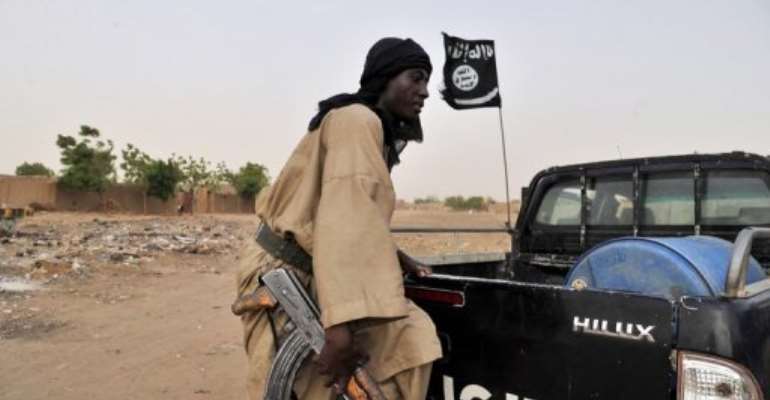 A fighter of an Islamist group MUJAO patrols on July 16, 2012 in Gao, northern Mali. By Issouf Sanogo (AFP/File)

BAMAKO (AFP) - An Al-Qaeda-linked jihadist group based in northern Mali said Wednesday it had freed two Spanish and one Italian hostage who were kidnapped in western Algeria last October.

"Consider them freed, because our conditions were respected," Mohamed Ould Hicham, a leader of the Movement for Oneness and Jihad in West Africa (MUJAO), told AFP.

He said a ransom had been paid for the three aid workers, referring to it as a "debt", but he would not be drawn on the amount.

Hicham also said the hostages -- an Italian woman, a Spanish woman and a Spanish man -- had been freed in a "Muslim country" but would not say which one.

In Madrid, a spokesman for the foreign minister said: "The liberation process is almost finished, it was delayed by a sandstorm... A plane was sent to bring home the two Spaniards."

A military source in Burkina Faso -- often involved in mediation for hostage releases -- told AFP that intermediaries from their country had been sent to fetch the hostages.

The hostages were abducted from a Sahrawi refugee camp in Tindouf, Algeria.

The previously unknown group MUJAO claimed responsibility, presenting themselves as an offshoot of Al-Qaeda in the Islamic Maghreb (AQIM).

In May, MUJAO demanded the release of two Sahrawis arrested by Mauritania for their role in the kidnapping, as well as 30 million euros ($40 million) in ransom.

They threatened to kill the Spanish man if their demands were not met.

In Nouakchott, online news agency Alakhbar reported that among Islamist prisoners exchanged for the hostages was a Sahrawi called Memine Ould Oufkir, one of those arrested in the wake of the kidnapping.

MUJAO last week said they had freed three of seven Algerian diplomats kidnapped during the takeover of the northern Mali city of Gao in late March.

No further details were given on a ransom or the identity of those freed.

MUJAO, along with Islamist group Ansar Dine (Defenders of Faith) and a Tuareg rebel group, seized key northern Mali cities in the chaos that followed a March 22 coup in Mali's southern capital of Bamako.

However the jihadists have since forced the Tuareg fighters, who wanted an independent secular state, out of key positions as they seek to implement strict Islamic law.

MUJAO is holding the city of Gao.

Both Islamist groups have stated ties to AQIM and other jihadist groups on the continent, raising fears that the vast region could become a safe-haven for extremist groups.

AQIM has for years carried out attacks, kidnapped foreigners and been involved in drug and human trafficking in the Sahel.

They also have Swedish, Dutch and South African hostages taken last November in an attack on Timbuktu in which a German was killed.