Moroccan villagers steamed up over silver mine 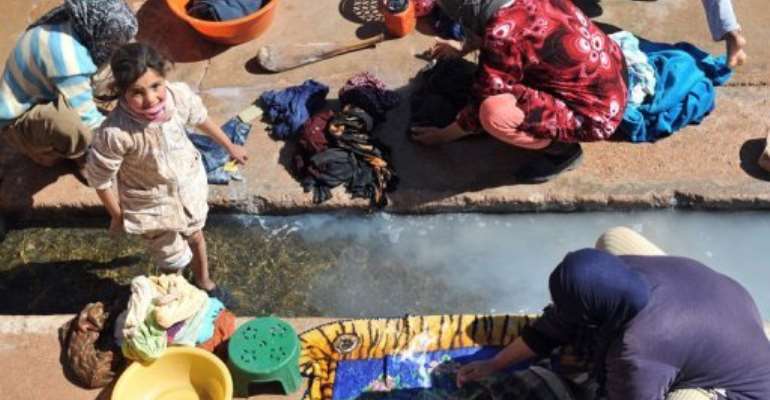 IMITER, Morocco (AFP) - Atop a remote mountain overlooking one of Africa's largest silver mines, a group of Moroccan activists -- many of them women and children -- are trying to choke off the facility's water supply.

Since August, the women have turned out by the hundreds in this arid region, along with their kids and men of all ages, to block some of the main wells supplying water for mining operations.

They claim the facility in Imiter, a Berber village nestled in the High Atlas mountains, is drawing more than its fair share of water and polluting what it uses.

"We've closed the sluice gates on the wells to protest against our misery," said Moha Ouberka, a local resident who works at the mine. "Look around, we are living in the stone age."

Ouberka said protesters are decrying the lack of jobs, roads, schools and a regional hospital. Such things, protesters claim, should be abundant in an area whose mining operation produces more than 240 tonnes of silver each year and had a balance sheet of 74 million euros ($97 million) in 2010.

"Residents aren't benefiting from the mine," said local official Ahmed Sadqi, noting the nearest hospital was about 200 kilometres (124 miles) away.

The mine is operated by the Metallurgical Society of Imiter, a sister group of Managem, which is indirectly controlled by a holding belonging to Morocco's royal family. The mine has been in use since 1969.

Protesters say the mine should employ 75 percent of its workers from local populations, but the company has called such demands unrealistic.

"We offered them a 60 percent local-recruitment rate, but they wouldn't hear anything of it," said Youssef El Hajjam, a director of the Managem group.

The mine has become emblematic for frustrations felt by residents of this region, one of the poorest in the country. Similar water struggles across the planet are among the issues being considered at the 2012 World Water Council, taking place this week in the southern French city of Marseille.

So far, police have not intervened in the Imiter protest, and while the mine is still getting water production has reportedly slowed down 40 percent. The firm's shares have also slumped in the Casablanca stock exchange since the locals launched their action.

Imiter villagers complain the region's groundwater levels are drying up thanks to the mine's insatiable thirst as it processes silver ore.

Since 2004, water from our wells has dropped considerably," said Moha Ouberka. "We've been small farmers since the dawn of time and now we don't have water in our region, which was previously known for its water supplies."

A study carried out for the Imiter government found that water levels in the region had dropped in 2004 and 2005 by between 58 and 61 percent.

But according to El Hajjam, an impact study found no tie between the mine and ground water levels. Managem did not provide a copy of the study.

Imiter residents also complain their water has become polluted. They say water storage after it has been used to wash ore does not comply with safety standards.

"Last year, a family lost all its sheep after they drank this water," said resident Omar Moujane. Managem "had to compensate them for the scandal."

But El Hajja said such water was recycled in special basins from which there was no risk.

On Mount Ablan, villagers remain in the shelters they built last year.

"We are determined," said Imiter resident Brahmin Oudaoud. "We've got nothing to lose."