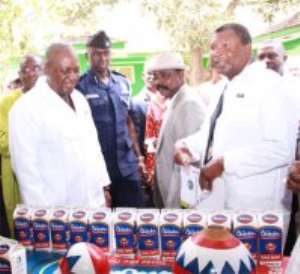 A new production plant of the Accra Brewery Limited (ABL) was yesterday inaugurated by the Vice-President, Mr John Dramani Mahama, with a call on companies to use more local materials in their production.

The use of local materials, he said, was crucial to provide a market for raw materials producers, increase productivity and create more jobs.

The $2.5 million plant, with the capacity to produce 100,000 hectolitres of beer per annum, will produce a new type of beer called ‘Chibuku Shake Shake’ from local maize and sorghum.

About 700 farmers are expected to be engaged to produce about 300 million metric tonnes of maize and 200 metric tonnes of sorghum annually to feed the plant, while about 20,000 direct and indirect jobs will be created.

Performing the ceremony, Mr Mahama said in line with the government’s commitment to encourage local production, a greater part of the $3 billion Chinese loan facility would be used to promote avenues to increase the country’s production capacity.

For instance, he said, part of the money would be used for the irrigation of 100,000 hectares at the Accra Plains.

The Vice-President said the fact that the new plant would be using local maize and sorghum for the production of beer meant that more farmers would be engaged to supply the produce.

Mr Mahama urged other companies to emulate the example of ABL by promoting the use of local raw materials.

He noted that in the 1960s, the Tiger Pito Factory, a state-owned company, introduced the tiger ‘pito’ beer but the factory was shut down by 1975.

A Deputy Minister of Food and Agriculture in charge of Crops, Mr Yaw Effah Baafi, dismissed the suggestion that the use of maize and sorghum would affect local production of the crops, saying the plant could only produce 0.6 metric tonnes of sorghum and 0.16 metric tonnes of maize annually.

In a speech read on her behalf, the Minister of Trade and Industry, Ms Hannah Tetteh, said the government was in discussions on the promotion of the use of local materials and the possibility of reducing taxes on local materials.

The Managing Director of ABL, Mr Greg Metcalf, said Chibuku Shake Shake was a traditional African beer with roots in southern Africa and gave an assurance that the company would offer quality at all times.

The Chairman of the ABL, Dr Charles Mensa, underscored the need for the government to encourage ABL and other local companies to grow their businesses.