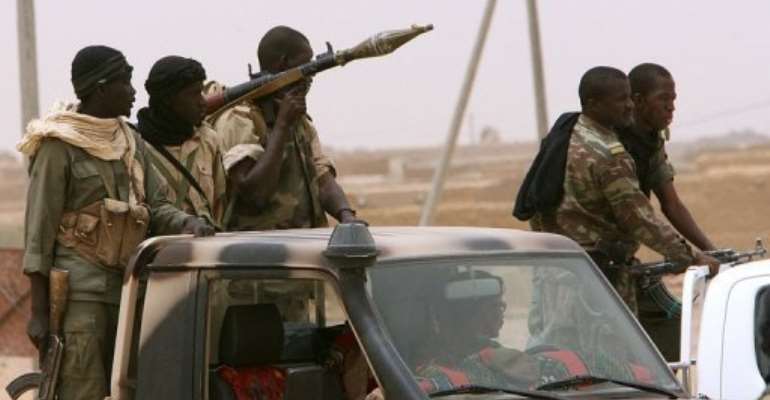 BAMAKO (AFP) - Malian soldiers clashed with Tuareg separatists from the National Movement for the Liberation of Azawad Wednesday in a town south of the rebel-held regional capital of Kidal, military sources told AFP.

Troops attacked militant positions in Anefis, 200 kilometres (125 miles) south of Kidal, as part of an operation to retake the city from the ethnic Tuareg MNLA which is accused of "ethnic cleansing" after a wave of expulsions of black residents.

"Our troops have engaged armed bandits in the Anefis area who have suffered heavy losses of men and vehicles," said Malian army spokesman Souleymane Maiga.

The clashes were confirmed by the MNLA and a regional military source.

"The Malian army has attacked our positions this morning in Anefis. It decided to resolve the situation through war and the Malian government will bear the consequences," MNLA vice-president Mahamadou Djeri Maiga told AFP.

"We never wanted to resolve the situation by war, but as this is so, we will defend ourselves until the end," he added, speaking from the Burkina Faso capital Ouagadougou, where he is in talks with Malian officials over the staging of Mali's upcoming elections.

Malian troops have been deployed in four "battle groups" to encircle Kidal, the army told AFP on Tuesday.

The fighting came after more than 100 black inhabitants were expelled from the city by the lighter-skinnned MNLA fighters in an act denounced as "ethnic cleansing" by the government, which says the presence of troops in the city is "non-negotiable".

The unrest has cast a shadow over talks held by Burkina Faso's government in Ouagadougou with Malian officials and Tuareg leaders in a bid to clear the way for presidential elections planned for July 28.

The MNLA rose up to fight for independence for the north in January last year and overwhelmed government troops, leading frustrated mid-level officers to launch a coup which toppled elected president Amadou Toumani Toure.

Together with Al-Qaeda-linked militants, they seized key northern cities, but were then chased out by their former Islamist allies.

Former colonial ruler France sent troops in January to block an advance by the extremists on the capital Bamako, pushing them out of the main cities and into desert and mountain hideouts.

The French army then let the MNLA back into Kidal, ignoring demands by the Malian military to be allowed into the city and raising fears in Bamako, 1,500 kilometres to the southwest, that Paris wants to let the Tuareg rebels keep Kidal as part of an eventual deal for self-rule.

While French troops control the airport and work with the MNLA in Kidal, the separatists have rejected any suggestion that they should allow the Malian military or government into the city, which has been rocked by violence since the intervention.

In the latest of a string of deadly attacks a suicide bomber blew himself up Tuesday at the house of an MNLA leader suspected by the Malian army of being an informant for the French military.

Any attempt by uniformed vigilantes to foment trouble here w...
3 minutes ago

Our spiritual father says vigilantes are being recruited, ar...
10 minutes ago