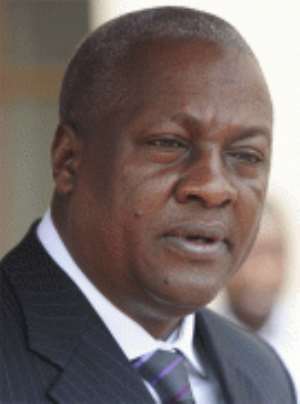 An $89.1 million social intervention project to create jobs and reduce poverty in 40 deprived districts across the country has been launched.

The Ghana Social Opportunities Project (GSOP), which is to benefit about 210,000 people, also seeks to strengthen the implementation of the existing Livelihood Empowerment Against Poverty (LEAP) programme and the newly introduced Labour Intensive Public Works (LIPW).

The International Development Agency (IDA) is supporting the five-year project with $88.6 million, while the government is contributing $500,000.

The GSOP has five main components comprising the rationalisation of national social protection spending, the LIPW, the LEAP programme, capacity building, as well as management and co-ordination.

Launching the project at a ceremony at Nadowli in the Upper West Region Thursday., Vice-President, John Mahama, noted that the project was meant to put money in the pockets of people and provide infrastructure in deprived communities.

That, he explained, was the reason for the shift from the situation where artisans were brought in from elsewhere to work on government projects in beneficiary communities.

He said under the project, indigenes with skills would be employed to undertake government projects in order to hav

e some income.
The Vice-President, therefore, advised the people, particularly farmers in the three northern regions, to take advantage of the project by staying in their communities after harvesting their produce, so that they could make some extra money from the work they would do under the GSOP.

He mentioned some of the already existing social intervention programmes the government inherited and was building on as the capitation grant, the school feeding programme, the distribution of free school uniforms, as well as the construction of 2,300 school structures to replace schools under trees.

Commenting on the Single Spine Salary Structure (SSSS), the Vice-President said so far about 90 per cent of workers had been integrated onto the structure, a development which had increased the wage bill of the government from GH¢1 billion to GH¢4 billion.

Making specific reference to some placards mounted at Kaleo in the Nadowli District, he explained that the creation of new districts was not done by the government alone but in consultation with the Electoral Commission, as stipulated by the 1992 Constitution.

He assured the people of the respective areas to exercise restraint, pointing out that as the country’s economy grew, more and more districts could be created.

The people of Kaleo in the Upper West Region are among a number of towns which are up in arms after the town was not mentioned in the recent districts created.

On the new Wa Hospital project, the Vice-President assured the chiefs and the people that work would soon commence.

The Minister for Local Government and Rural Development, Mr Samuel Ofosu-Ampofo, charged metropolitan, municipal and district chief executives to pay special attention to the GSOP and ensure that the right people benefitted.

He said payment under the project would be made fortnightly, so that the beneficiaries had regular income.

He also urged the various stakeholders, including the assemblies, to create the necessary awareness of the intervention.

For his part, the Upper West Regional Minister, Alhaji Issaku Salia, welcomed the project and expressed the hope that it would improve the living standards of the people.

He said the initial GH¢50,000 start-up cash transfer for the beneficiaries in the area of information, education and communication gave hope to the people and commended the government for the initiative and urged all to fully support it to succeed.