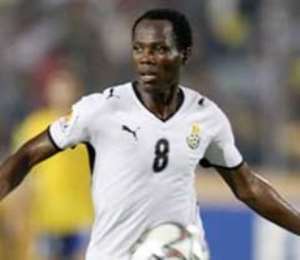 Derek Asamoah got a late goal to save Ghana's blushes against a resilient Gabon in an international friendly on Tuesday night. Ghana won 2-1.

The Korea-based player reposed the confidence put in him by his coach when he came on as a second half sub in Paris. The game looked to be heading for a draw when Andre Ayew's cross was powered home by the Pohang Steelers winger.

Gabon were level at that point after they had equalised Emmanuel Agyemang-Badu's goal scored through a penalty in the first half. Masawudu Alhassan, who had a good game at left back, had been brought down in the Azingo Nationale penalty box.

Sulley Muntari, who had started as captain of the day, pulled out of the game after landing badly. The team doctor explained after the game that further tests would be run, but that the change was only precautionary for the Inter midfielder.

Several changes in the second-half slowed the game noticeably before Derek Asamoah got the winner. Goran Stevanovic gave other new callups, Jeffrey Schlupp and Charles Takyi opportunities in the second half.

After the game, Jordan Anagblah, vice president of the Ghana FA, said "we watched the new players called up and I think some of them are ok. Not all of them; some of them"

The next plan for the team would be to begin pre-African Cup of Nations camping in December.