A US military base in Africa 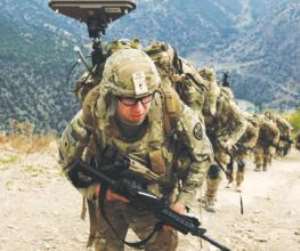 Windhoek – The United States military is likely to announce in 2012 where on the continent it will headquarter its much-maligned Africa Command (AFRICOM).

The proposed military base is presently based in Stuttgart, Germany because no African country has as yet expressed willingness to host American troops.

The US has military bases dotted around the globe and Africa is the only continent that has so far resisted a formal and permanent American military presence.

However, that resistance appears to be on the verge of vanishing.

The past decade has seen the US increasingly casting a covetous eye on Africa's mineral resources and huge energy reserves and it is secure these and other strategic interests that the country wants to establish a military base on the continent.

Controversy over AFRICOM returned to the fore recently when the Youth League of South Africa's ruling ANC party labelled Botswana's government a 'puppet regime' that is likely to host the American military base.

Botswana has denied the charge.
However, defence and security experts told The Southern Times that it was just a matter of time before the US realizes its dream of establishing a permanent military presence in Africa.

The US military has strong collaborative relationships with several countries in all five regions of the continent.

America describes AFRICOM as a combatant command 'plus', meaning it will have all the responsibilities of a traditional geographic combatant command, including facilitation of and leading full military operations.

The force includes a broader 'soft power' mandate that the US says is aimed at building a stable security environment through incorporation of a large civilian component from American government agencies.

AFRICOM's first commander, General William Ward, has said the force will play a supporting role to the US Department of State - which conducts diplomacy - and USAID.

In a Congressional Research Service paper for members and committees of the US Congress on July 22, 2011, Lauren Ploch, an American expert on African Affairs, said AFRICOM could find an African home next year.

'A decision on AFRICOM's final headquarters location has been postponed to 2012 to allow the command to gain greater understanding of its long-term operational requirements,' Ploch wrote in 'AFRICOM: US Strategic Interests and the Role of the US Military on Africa'.

The paper analyzes the US military's current activities in Africa, and reveals that AFRICOM fired the first shots in NATO's illegal invasion of Libya.

AFRICOM attacked Libya in March this year before handing over the official military command to NATO on April 1.

Citing statistics from US defence officials, Ploch said America already had around 3 500 troops in Africa.

More than 2 000 of these are at Camp Lemonnier in Djibouti.

The US has a five-year lease with the Djibouti government for the Lemonnier base and has the option to extend this to 2020.

'CJTF-HOA has a semi-permanent troop presence at enduring forward operating site, Camp Lemonnier in Djibouti with more than 2 000 US military and civilian personnel in residence,' Ploch wrote.

This year a budgetary requirement of US$51.6m has been requested and some of the money will be used to finance construction of a Horn of Africa Joint Operations Centre.

The estimated budget for 2012 is US$89,5m.
While it is publicly known that the US also has military ties with Kenya and Uganda in East Africa, CJTF-HOA also lists Burundi, Chad, Comoros, the DRC, Madagascar, Mauritius, Mozambique, Rwanda, Tanzania, Uganda and Yemen as 'areas of interest'.

The US uses military facilities in Kenya for its 'anti-terrorism campaign' in the Horn of Africa.

America also has access to military locations in almost all parts of the continent.

In US military jargon, these are referred to as 'lily pads' or Co-operative Security Locations (CSLs).

In addition, AFRICOM has links with the African Union headquarters in Ethiopia through its military liaison officers.

'Those may expand, and additional liaison officers may be attached to other regional organizations,' Ploch wrote.

Colonel Festus Aboagye, a senior research fellow in conflict management with the Institute for Security Studies in South Africa told this paper that while the US has not yet succeeded in securing a base for AFRICOM, negotiations will likely be with countries 'that have open foreign policies'.

'It pursues an open foreign policy and accepts such engagements with the US,' Aboagye noted. Refusing to offer land for a permanent base does not mean that African countries might not collaborate with US military, he said.

In the region, South Africa and Mozambique also offer scope for collaborating with the US military.

'I don't think South Africa would allow the US to have any kind of headquarters or base but that doesn't mean it's not going to collaborate.

'In Mozambique, the threat of maritime piracy and lack of resources to contain the threats might see the country turning to the US for collaboration,' Aboagye said.

In an interview, Botswana's Foreign Affairs Minister Phandu Skelemani flatly denied that his government harboured any interest in solidifying military links with the US.

'It's an old allegation. People have been saying that we gave US military land in west of Gaborone.

'It's a figment of imagination of these people. What we advise them is that if they are dreaming, they should not dream during daylight.

He, however, admitted that 'like any other country' Botswana conducted military training exercises with the US.

'We are a member of SADC and the AU; how could we bring the US military to our neighbours,' Skelemani emphasized.

Africa is the only grey area on US's global military sphere of influence.

America has the US North Command (USNORTHCOM), US EU Command, (USEUCOM), US South America Command (USSOUTHCOM), US Central Command (USCENTCOM) and US Pacific Command (USPACOM).

These permanent and fully operational commands cover every region of the world – except for Africa.

When the US under the George W Bush first floated the idea of AFRICOM, it was publicly resisted by several African countries.

Ploch, in her report, said the US later 'received offers to host the command from several governments', though only Liberia publicly invited American troops onto its soil in 2007.

Pressure from within the AU saw Liberia going quiet on its offer.

AFRICOM's lead role in the Libyan offensive is indicative of the consequences of having a permanent US military presence on the continent.

NATO then assumed the lead in military operations in April under 'Operation Unified Protector'.

The US has long had Africa in its sights and China's unannounced arrival on the continent has raised the stakes.

In 2006 US National Security Strategy identified Africa as a 'high priority' and concluded that 'our security depends upon partnering with Africans to strengthen fragile and failing states and bring ungoverned areas under control of effective democracies'.

During his visit to Ghana in 2010, US President Barack Obama claimed: 'Our African Command is focused not on establishing a foothold on the continent, but on confronting these common challenges to advance the security of America, Africa, and the world.'

The US is keen to move AFRICOM from Stuttgart to an African location in 'close geographic proximity to the AU, African regional organizations' and US diplomatic missions.

'Locating US soldiers permanently in a foreign country would be predicated on the host country's approval of a Status-of-Forces Agreement (SOFA), a legal document negotiated by the State Department to define the legal status of US personnel and property while in that country, and a bilateral non-surrender agreement, commonly known as an Article 98 Agreement, to protect American servicemen from prosecution by the International Criminal Court.

'AFRICOM estimates that the US military footprint on the continent (exclusive of Egypt) averaged approximately 3 500 troops in 2010.

'This includes an estimated 2 000 troops at CJTF-HOA and the rotational presence of forces participating in various exercises,' the Ploch report says.

Africa, it seems, will not resist US pressure to establish AFRICOM on the continent for very much longer.