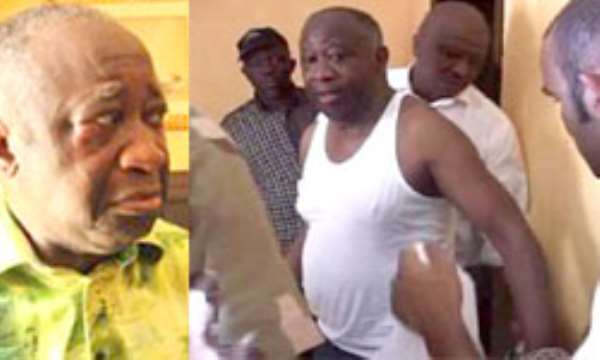 'The United Nations mission in Cote d'Ivoire has confirmed that former President Laurent Gbagbo has surrendered to the forces of Alassane Ouattara and is currently in their custody,” UN spokesman Farhan Haq said on Monday.

Haq said the UN mission, known as UNOCI, was “providing protection and security in accordance with its mandate”. He told Reuters that UNOCI was mandated to protect all political stakeholders in Cote d'Ivoire, which included Gbagbo.

Early reports said Gbagbo was arrested after a raid by French forces on a bunker at his residence in Abidjan. Toussaint Alain, a Gbagbo advisor, told Reuters that the incumbent President had been “arrested by French Special Forces in his residence” and “handed over to the rebel leaders”.

Jean Marc Simon, the French ambassador to Cote d'Ivoire, confirmed the capture to the AFP news agency, but the operations were carried out by soldiers loyal to Ouattara.

A Ouattara spokesman told Al Jazeera that Gbagbo, along with his wife and several advisors, was being held at the Golf Hotel, which has been Ouattara's headquarters since a disputed presidential poll in late November.

Gbagbo was “alive and well”, according to Youssoufou Bamba, Cote d'Ivoire's ambassador to the United Nations, and would be “brought to justice for the crimes he has committed”.

A pro-Ouattara television station showed footage of Gbagbo being brought into the Golf Hotel shortly after news of his capture broke. Footage of him receiving medical treatment was also shown.

Guillaume Soro, the country's Ouattara-appointed prime minister, has made an appeal to rivals to join the Ouattara camp. “To all the forces, I make a last appeal to rally [with us] … there cannot be a manhunt,” Soro said in an address to the Ivorian people carried by French television station i-tele.

“Join the Republican forces!” The UN says that the chief of Gbagbo's forces has contacted UN peacekeeping authorities to say that they wish to surrender their weapons.

The capture comes after ten days of heavy fighting in Abidjan, but months of a bitter political crisis in which both sides have been accused of human rights abuses by international rights organisations, and which has claimed at least 800 lives, according to the UN.

Issiaka Konate, a London-based leader of Ouattara's party, told Al Jazeera that “people will pay for all crimes committed in Ivory Coast”, responding to a question regarding rights abuse allegations leveled by Human Rights Watch against pro-Ouattara forces.

Al Jazeera's Haru Mutasa, in Abidjan, reported that the city was tense following the arrest, with neighbourhoods around the presidential residence completely deserted, while those around the Golf Hotel were beginning to fill up with armed Ouattara supporters.

As news filtered through to citizens of the country's commercial capital, however, scenes of jubilant celebration were seen in several pro-Ouattara neighbourhoods.

International reactions
Nicolas Sarkozy, the French President, spoke with Ouattara on the telephone at length shortly after Gbagbo's arrest, the Elysee palace said. William Hague, the British foreign minister, greeted the news by saying that Gbagbo must be “treated with respect and any judicial process that follows should be … fair and properly organised”.

The United Nations Security Council received a briefing from Alain Le Roy, its Under Secretary-General and Head of Peacekeeping, at the body's headquarters in New York following the capture.

Briefing the press after the meeting, Le Roy said that UNOCI was acting under its mandate by now providing security to Gbagbo, who he said requested the protection himself. “It is up to President Ouattara to decide … what he wants to do with former president Gbagbo,” Le Roy said.

He also warned that the crisis in Cote d'Ivoire was not over, even though an “important step” had been taken to end the violence.

In a brief statement, Hillary Clinton, the US secretary of state, called “on all Ivorians to remain calm and contribute to building a peaceful future for their country”. Jay Carney, US President Barack Obama's spokesman, said Obama was glad to hear of the arrest, as the US considered Gbagbo to have lost legitimacy as president.

Jerzy Buzek, the president of the European Parliament, said in response to the capture that Ouattara “should now confirm his statesman qualities and take concrete steps to foster national reconciliation”.

French advance
Earlier on Monday, a column of more than 30 French armoured vehicles and tanks were seen advancing towards Gbagbo's residence. Two tanks took positions at a key intersection, while the rest of the vehicles advanced on the compound. Forces loyal to Gbagbo were seen fleeing the area, as the French forces advanced.

Meanwhile, forces loyal to Ouattara attacked positions around the state television station [which was still controlled by Gbagbo] and his home. A French military representative denied that French operations on the presidential residence had been co-ordinated with Ouattara's forces.

Clashes between French and pro-Gbagbo forces were also reported from around the nearby Plateau business district.

Helicopter attacks
Earlier in the day and through Sunday night, UN and French helicopters fired rockets at Gbagbo's residence in Abidjan.

Al Jazeera's Mutasa said five helicopters were used in the attack on Sunday and that they flew from a French airbase.

After flying to the Cocody area, where the presidential residence is located, they fired their rockets and returned to the airbase to reload. The process was then repeated.

At the time, Ban Ki-moon, the UN secretary-general, said he had given orders to use “all necessary means” to stop Gbagbo”s heavy weapons.

Speaking to Al Jazeera on Sunday, UN spokesman Hamadoun Toure said UN helicopters were only targeting heavy weapons sites and not Gbagbo himself. “We are not trying to take control of his residence … Our objective is not to capture anybody,” Toure said.