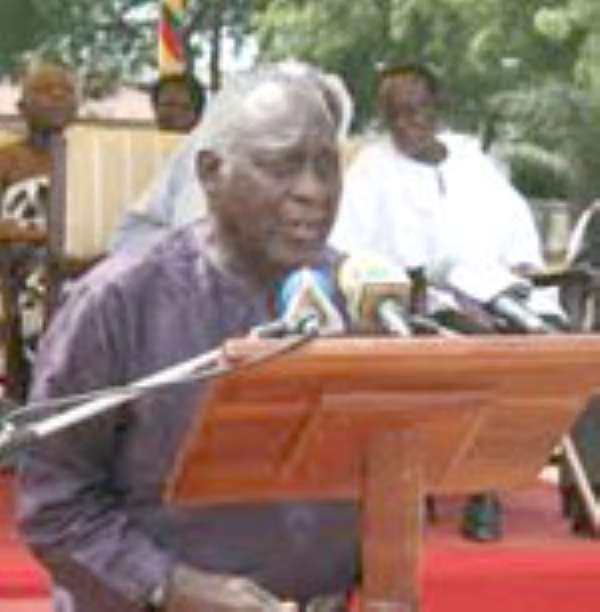 He disagreed with the perception that the Council is a rubber Stamp of the executive, insisting that they take decisive national decisions for the presidency.

According to him, Ghana has a vigorous Council of State that can boast of members that extol their own virtues, by deciding for the President as and when necessary.

'Ghana has a very vigorous council of state. We are not a rubber stamp for the President. We actually challenge the President when need be, except that we are not mandated to go to press with our concerns', he stressed, to buttress his claim that they make their own decisions in relation to national interest.

Professor Kofi Awoonor was speaking at the sod cutting ceremony for the construction of a two storey office building for the Council of State in Accra.

He said members of the Council of State are alert to their task, adding that they challenge the President when the need arises, and should not be seen as instruments in the hands of the executive.

He intimated that the only reason why they are hardly heard openly commenting on issues of national concern was that they are not mandated by the constitution to go to the press with issues.

'We challenge the President a lot. Except we don't go to the roof top of radio stations and shout, because we not mandated to go to press', he stated and challenged the media to monitor the progress of the construction and report and lapses detected.

He said members of the council have the political will to see to the completion of the building, describing the Council of State as an important arm of Ghana's constitutional arrangement.

Earlier, the Engineer-in Chief of the Public Works Department (PWD),  Rockson Yeboah said the need to put up an office building came up in the year 2004, but the project could not come to fruition owing to lack of adequate funds.

He said subsequently in 2010, under the Chairmanship of Professor Kofi Awoonor, the project was revived and in 2011 funds have been released for its commencement.

Touching on the project description, Rockson Yeboah said the building occupies a footprint of about 53,001 meters by 43,424 meters -with the ground floor consisting of parking areas for 30 cars, hard and soft landscape areas, a reception, an internal courtyard, a podium, and committee rooms. The rest of the ground floor consist a medical wing, offices, protocol room, driver's room, staff canteen and a kitchen.

He said the first floor houses the Chairman's office, offices for the council members and staff as well as ancillary facilities.

Mr. Rockson Yeboah further stated that Messrs Antartic Construction Works won the bid for the execution of the project for the contract price of GHC 2,387,944.54 and scheduled for completion within 24 calendar months.